My Baby Bro's girlfriend's sister (get that?) has a WONDERFUL company called Christina's Crystal Creations and she makes pet accessories, dance costumes and basically anything else you'd like crystallized. I met Baby Bro's GF (not the sister, still following?) when we were visiting Toronto back in March and we shared pictures of our puppies, which is when she told me of her sister's company. Since our dogs are small and can't fight back, from time to time we like to dress them up a little. Currently, they have one "formal" outfit which consists of a t-shirt tuxedo. Marc has one too, so the whole fam can dress up together. It's pretty awesome, really.
However, those t-shirts have now been replaced!  LOOK what arrived yesterday! 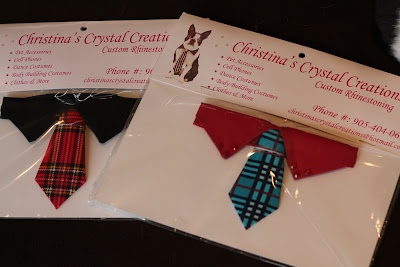 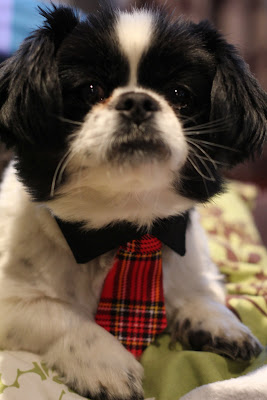 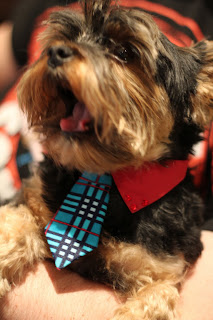 Blue plaid is SO Pickle...as are the rhinestones on the collar. 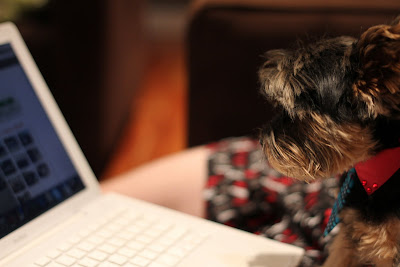 "Man, WHEN will I finish this report? I'm gonna be late picking up the kids!" Bahaha. I'm hilarious.
Also included in the Professional Puppy Package was a 6' VIOLET boa. I've mentioned how I have a pole in our basement, but I haven't really followed up with how our basement has gradually been transformed into a gym/dance club...complete with built-in surround sound and a rotating disco ball on the ceiling (obviously). As such, I've started acquiring things that are fun to dance around in: boas, sequin fedoras, sequin fingerless gloves, a pink wig. Despite my solid collection of black, white and pink boas, I haven't been able to find a purple one (purple is my FAV colour).
WELL, Baby Bro's GF took care of that TOO because she has access to costume inventory via her sister and mother. When I told her that there's a definitive LACK of costume stores here, she asked WHAT KIND of purple I'd want. Giddily, I told her I'd want a violet one, never really thinking that she'd find one,
BUT
SHE
DID!!
My brain practically exploded when I opened up the box.
So, props to Baby Bro and his GF for the amazingly thoughtful gifts!!!
*hands bag of props*
Oh, and if you'd like to order anything from Christina's Crystal Creations....
christinascrystalcreations@hotmail.com