Not a Senior Yet

Infomercials, for the most part, are freaking hilarious. I'm not sure why insanely-usless items are so appealing between the hours of two to five in the morning, but they are. One of my favourites is the walk-in bathtub.
I've been a sicky-face for the last few years and my illness has granted me a sneak-preview on what my life will be like when I'm a senior citizen. I get pneumonia, take naps to make it past 9pm, can't handle the heat, can't handle the cold, walk slowly and sometimes need to sit down to take a break, and I'm the proud owner of an assisted parking space permit (you can imagine the looks I get when I whip that baby out, being as I look relatively healthy. My favourite heckle came from a seriously overweight man, parked in an assisted spot, smoking and eating beef jerky AT THE SAME TIME). Anyway, what I'm saying is that I now have a soft-spot for anything senior related, which includes the late-night presentation of walk-in bathtubs.
Here's the commercial.
Yesterday, while wandering around two major DIY stores, you can imagine my DELIGHT when we FOUND ONE!! 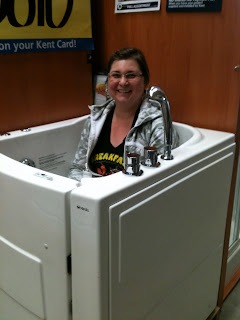 Obviously, I was inside and seated in less than four seconds.
So I have to say that it's the WEIRDEST feeling, being inside one of these puppies. Although it's open above my shoulders, it was VERY confining. Plus, the overflow thing was around my elbows.There's that spray thingy, but the elderly population I roll with would have a hard-er time reaching their arm around for a rinse than stepping into a shower. 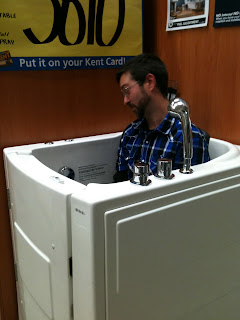 Marc wasn't terribly impressed either.
Verdict: It COULD be a good idea, but the execution leaves a lot to be desired. You have to wait for the water to drain before getting out and who wants to end a barely-there bath by sitting in the cold while waiting to get out? And my knees pretty much hit the door. Sitting in it made me wonder about those nuts who went over Niagara Falls in wooden buckets. Not the best image to come to mind as those people...well...they mostly died.
Think of your demographic, people! Just sayin' (haha, but not really).