Looking for a Hot Tub, Baby, This Morning

Last night, Marc was up late hooking up the newest addition to our family. Yes, she weighs over 850 pounds, is slightly high-maintenance in the beginning, and a little tricky, but that doesn't matter. What matters, is her 55 jets, no-float lounger and multicoloured light show.

We've been waiting for about 5 weeks for our tub to arrive and FINALLY, on Wednesday, it did. However, it'd been pouring rain for a few days and the massive delivery truck couldn't really get up our driveway without risking a topple-over into our ditch. Thankfully, both the driver and I had our heads on straight and cut our losses. The LAST thing we needed to deal with was a semi-tractor-trailer having an "I've fallen and can't get up" moment. The driver could only get about halfway up, which left a SIGNIFICANT distance between where he dropped it and where it had to go. 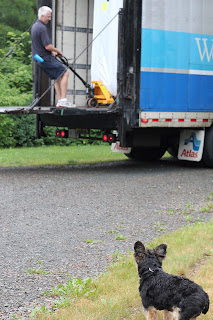 The Pickle was an excellent supervisor.
So, The Hubby called in reinforcements.
The following should have a disclaimer...
DISCLAIMER: How NOT to Move a Hot Tub

(I'm not hating. I legitimately needed to look away between pictures because I was so nervous.) 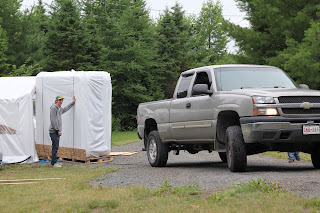 Step 1: Tie skid with rock-climbing rope to back of truck. 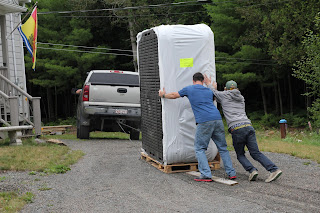 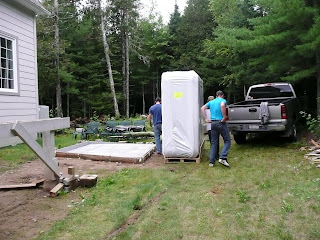 Step 3: Keep driving slowly, successfully avoid being clotheslined (via literal clothesline) until you reach your destination. Don't be alarmed as the skid starts to break apart. I mean, there'll be three of you and 850 pounds divided by three is only about three hundred pounds...per person, so if it drops, it's really not a big deal. Right? 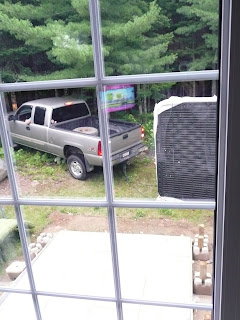 Step 4: If your skid manages to survive, make sure your truck has 4-wheel drive as you may need to drive into a forest; be prepared. 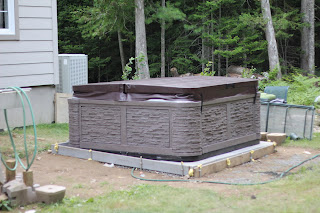 A little finagling later (not photographed as all hands were called on-deck, so to speak) and - BAM - hot tub! 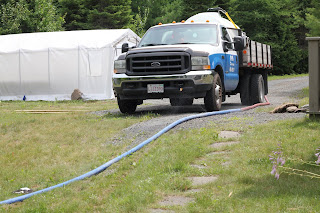 Something I thought I'd never do: order bulk water NOT in a bottle. We're on a well though, and there's a lot of minerals, so the hot tub lady suggested we get some delivered. 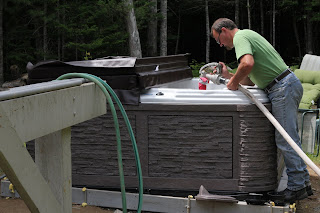 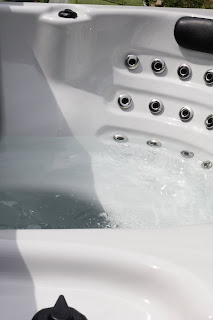 WHEEEEEE! The water went in great, we did the chemicals last night and now it's 100 degrees!!
Now, all that's left (haha...'all') is to build our amazingly-designed deck! That's an August project, though. Until then, I'll be chillin' in the backyard. Of course, by 'chillin' I really mean 'hottin'.