Too Cool for School

It's been about a million degrees here, the last couple of days. From the Twitter-verse, it seems to be the same almost everywhere. I haven't been feeling all that great, as a three-year old girl sneezed on me in line at the grocery store last week and infected me with her germs (I kid, I kid...but not really), so the combo of more medication and edible-air a la humidity means that these dogs aren't getting walked.
That doesn't mean that they don't need exercise though, so I've taken to going out four of five times a day and throwing their Most Favourite Toy of All-Time:
The Green Ball. 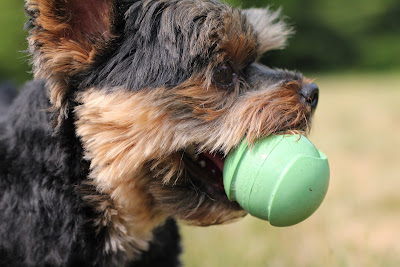 If you've ever been over to our house, then you know The Pickle is more than slightly obsessed with The Green Ball. Back in the day, it used to be red, but that one eventually fell apart. Now it's green.
If The Pickle had to choose between us and The Green Ball, he'd choose The Ball. (It's cool, we've accepted it).
Cheese or The Green Ball? The Ball.
Drinking water because The Pickle's been running around in fourty degree weather and is in danger of passing out from dehydration or The Green Ball? You can probably guess which he'd choose. (For reals. I have to physically take The Ball away from him or he won't drop it to drink).
So, a few days ago, we headed outside to play a little fetch. Pepi likes to play, but The Pickle gets VERY competitive - body checks included. After a couple of rounds where The Pickle was a bit of a dick, Pepi decided that this is how he'd play fetch. 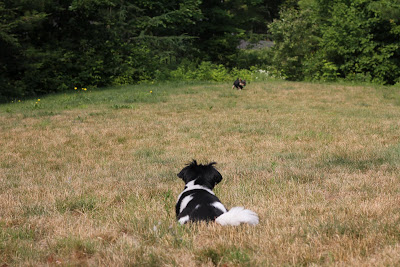 So I throw the ball and The Pickle takes off. Ps. How hilariously-small does he look? 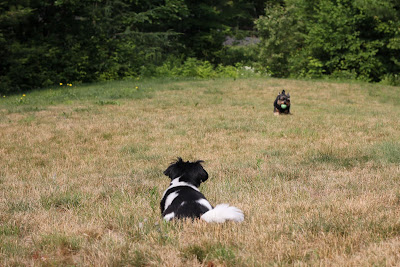 He's running as fast as he can, panting loudly all the way. 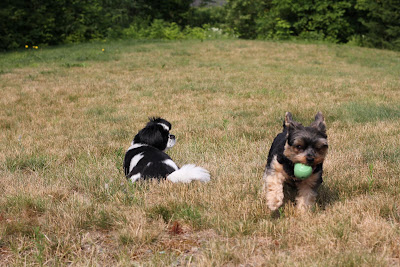 This is Pepi's reaction, "Oh, look...you got the ball...whatever." I swear he yawned and rolled his eyes after The Pickle passed him. Pepi thinks that he's part feline, as he licks his paws to clean his face, chases birds and pets bugs. So, as much as he looks disinterested, the MOMENT The Pickle loses track of The Ball, Pepi takes off and nabs it. The funny part is that The Pickle brings the ball back to me while Pepi runs around the yard, being chased by Pickle-the-Obsessed.
It's hilarious. 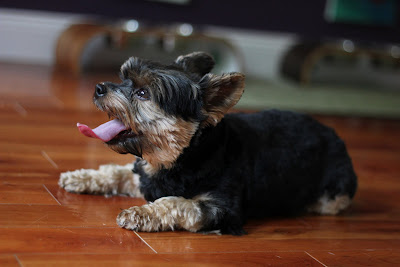 Tired and panting puppy - the reason we play fetch outside.

It thunderstormed randomly all day yesterday so hopefully that means the temperature will start to drop a little. I'm all for summer weather, but it'd be nice to not become a sweaty disaster after being outside for three seconds.
I'm NOT COMPLAINING (as warm is better than cold) but seriously, 100% humidity for five days is enough.