Here's the deal: Our two little furbabies are hella cute.
Yes, I'm terribly biased, but it's also kind of a fact. They're small, so they have a bit of an unfair cuteness advantage. That being said, they seem to have met their match.
Yesterday, while The Hubby was hard at work building our new deck, one of his buddy's girlfriends brought over their new puppy. Technically, they were planning on selling the puppies but two nights ago, one of them choked on a piece of dentabone and had to be rushed to the vet. Turns out, the puppy INHALED the bit of treat and it was lodged in his lungs. The vet said that he'd probably die.
NOPE!!
This guy's a little fighter. He lived through the night and the vet called the next morning to say that he was eating and alert.
Naturally, after such a traumatic experience (for my hubby's buddy's girl) that they've decided to keep the little guy and name him Onyx.
He's basically a two pound ball of fluff and I took about one million pictures of him yesterday. 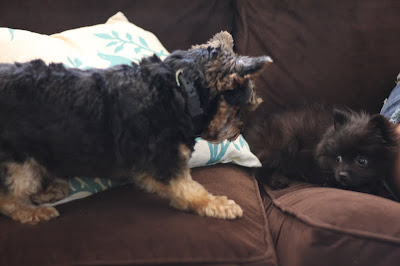 The Pickle was ALL UP in Onyx's little grill. At first, he wasn't impressed, but then they started to play. 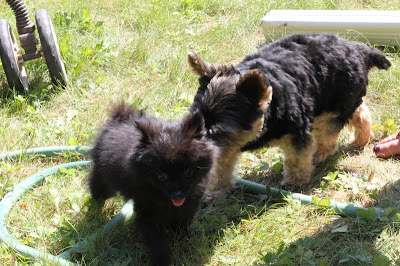 It's hilarious for me to see these pictures because they make The Pickle look big. 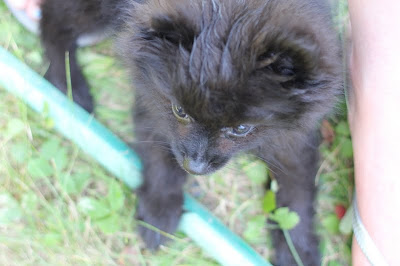 It was really hot, so we brought out the hose and soaked them. It was a wet puppy party. 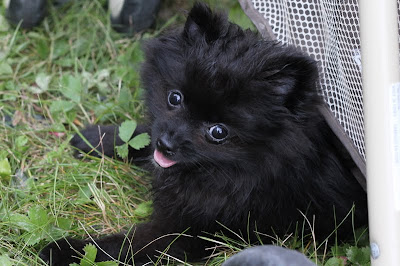 Look at his FACE!! Too precious!
There's two left in the litter and The Hubby and I have had a few conversations about a possible third addition. Of course, that would be CRAZY, right? We're not really going to get another but MAN, are these puppies cute. It's a good thing Onyx is going to stick around because hopefully just being able to visit with him will get rid of the OVERWHELMING URGE to bring a tiny black fluffball home.
Fingers crossed.