Pre-Dirty-Thirty FunTimes: Learning How to Surf

As most of you know, there are a lot of "25 Before 25" and "30 Before 30" lists floating around in the blogosphere. I too, had a "30 Things to do Before I'm 30" but the last four years of being sick completely destroyed that.
It's been a bummer, being in Life's Time-Out-Corner, but the more I thought about what I haven't manage to accomplish (yet) the more I realized that I've actually done a lot of sweet stuff already.
So, I've decided to spend the next few weeks posting 30 of the most awesome Pre-Dirty-Thirty Things I've already done.
*waxes optimism*
*squeezes lemonade out of lemons*
*looks to the sunny side of the street*
So without further adieu..
My first Pre-Dirty-Thirty FunTime: Learning How to Surf!
I've always dreamed of surfing but it seemed like an impossible feat, considering I've lived most of my life in Toronto. When I was 24, I spent the summer travelling around the South of France. It was pretty much the best summer of my life. As such, they'll probably be a few posts about the highlights.
For two weeks, a pal and I stayed in Biarritz, which is in the South-West corner of the country.

In the mornings, we were in French classes with ten extremely annoying Germans (seriously, they were like 16 years old and just wanted to get drunk...at morning break. I kid you not. It was awful). In the afternoons, we'd walk through Biarritz's very hilly but extremely beautiful downtown to make our way to the beach. Just look at this cute street! 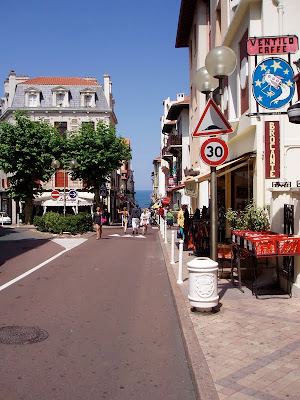 This is the beach where we learned how to surf, called Côte des Basques. Each evening, the tide would completely cover the rocks. It was freaking crazy and a pretty good place to hang out after surfing with a cold glass of wine (legal public drinking made our travels extremely relaxing, haha). 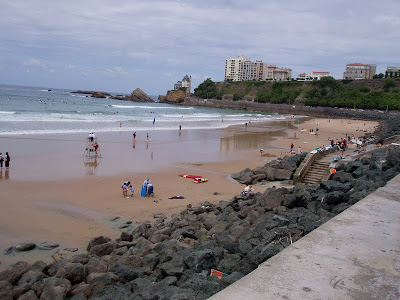 It was at the bottom of a huge-ass hill. Our bums never looked better! What we didn't know is that the second week of our stay was France's annual surf festival. The entire city was overrun with extremely cute surfer dudes who bought us drinks. It was awesome (obviously). 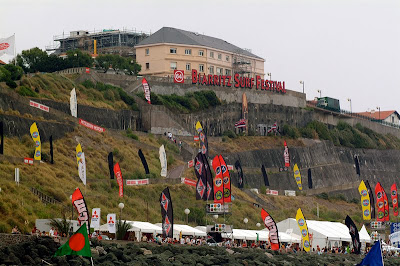 This was our surf school, under the black tent. Yes, it consisted of a van, tent and sign. With surfers, that's pretty much as legit as you're gonna get. 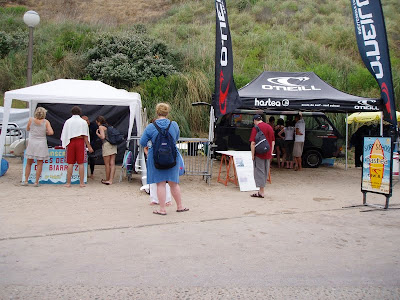 Our instructors and my pal. Side story, the one with zinc on his face accidentally gave me a full-frontal-flash on my last day. Despite the cold water, it was quite impressive.
They nicknamed us "Les Petite Pippettes" which roughly translates to "The Chatterboxes." Yeah, they pretty much had us nailed. 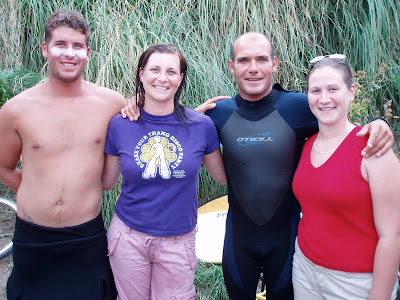 Our first lesson lasted about seven minutes on land and then we took to the water. My arms have never been more sore and it took a lot of inhaled saltwater and sheer determination, but I managed to stand up. Briefly. Before wiping out again. Still, it was the best time ever.
On our last day, a photographer showed up and took some amazing pictures of us cruising into shore. Of course, I'm using the term "cruising" loosely. It was more of a 'please don't fall, please don't fall' kind of deal.
However, on our glorious last day.... 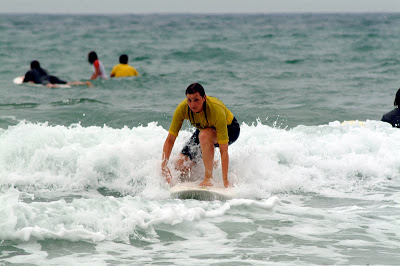 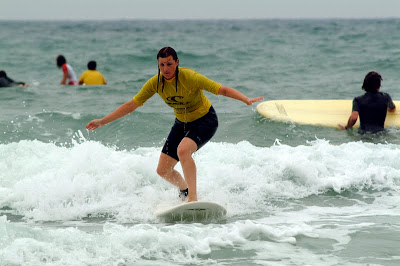 and make it all the way to shore! 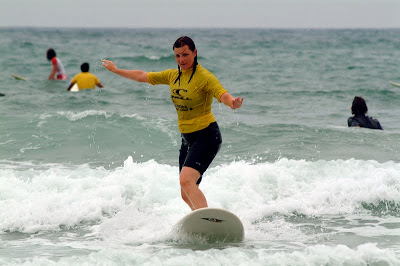 It was one of the most thrilling moments of my life! Like floating on a cloud...or water...whatever ;).
If you EVER have the opportunity, just DO IT! I promise that you won't regret it (just make sure you have health insurance first...I kid, I kid, but not really). And if you have the chance to surf in the south of France during an international festival, well, get on it and book the freaking ticket!