Hard to believe that this week marks the TEN YEAR Friend-a-versary with my Hetero-Life-Partner, aka The Mac.

Yes, an ENTIRE DECADE ago, I was nervously waiting for the newest Frosh to arrive at my university residence. Armed with a megaphone (not that I really needed one...I'm loud) I welcomed my future Bee Eff Eff and spent a few days putting her through somewhat embarrassing Frosh activities. It turned out that she got the room next to mine and she was kinda scared delighted to be so close to the moderately bitchy House Committee member (I was the designated take-no-prisoners member, mostly cause I could do it with a straight face).

Her roommate was strange and tried to copy my personality (true story, it was weird) so she spent a lot of time hiding out in my room. We'd watch movies (our res had no cable, seriously), chat about life and then make KD when we got home from the bar.


It was a super-fun year where we had tons of fun, went out like crazy, and filled in the leftover time with occasionally heading to class and learning something. 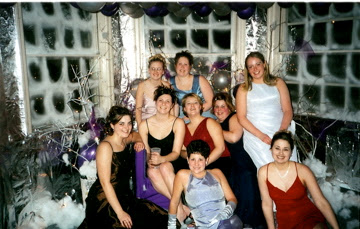 Here we are at our residence Formal. I'm sitting on the couch with awesome hair and a black dress, The Mac's in the silver dress, 3 gals to the right of me.

At the end of the year, we decided that we'd continue our friend-fest and become roommates in an apartment off-campus. We moved into a small building with 12 2-bedroom apartments. We were in one, two friends lived next to us and two other friends lived on the 3rd floor. So, essentially, we tried to recreate our residence without any pesky rules...haha, but not really. 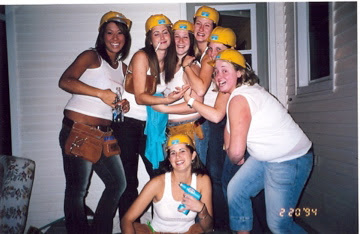 Halloween of 2004. My camera didn't believe in Y2K and held strong to the '90s. I believe there were even a few more construction workers in our crew. We basically took over the bar.

As fights broke out between our apartment-building-mates - which happened a lot - we'd lock our door and act like Switzerland. Since the fighting happened so often, we spent quite some time in the next two years pretending we weren't home and watching Judge Judy and Starting Over (bonus points for ANYONE who knows about that show). There were so many good times in that apartment that thinking about them makes me a little misty.

The Mac wasn't exactly a "dedicated student" in those years, so we were a perfect match because I was (and still am) an obsessive A-type who overbooks herself. For example, in my last year of Undergrad, I had a full course-load (honours), worked a part-time job, sat on the Student Union, ran the Student Info Centre and directed a play. During those insane times, I'd often come home after dark to find that The Mac had made me supper, folded my laundry and cleaned the bathroom. When I was about ready to lose my mind, she'd make me get dolled up and hit the town. In return, I'd drive her to the store so she could buy copious amounts of diet soda and stay up all night and do a project worth 80% of her mark...that she hadn't started...and was due the next day.

As you can see, we were a great team.

I searched and searched for pictures of the hilarious things we got up to but because I went to school pre-digitial-cameras, I can't seem to find my large box of photos printed from film. God, even writing that makes me feel old...right, moving on.

Then, I graduated and moved from Fredericton, NB to Ottawa, ON for grad school. It was a ridiculous tear-fest in the parking lot, as we said goodbye and for the next 5 years, we didn't live in the same city. We'd try to visit each other, but since we were still broke students, and then broke graduates, we had to settle for emails and calls. 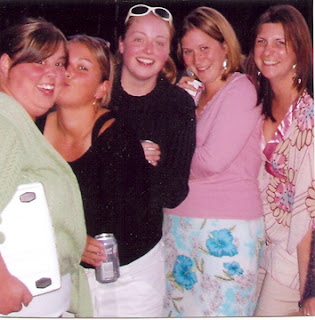 A dear friend of ours was killed in a car accident, so we all got together to celebrate her life. Our friend was always concerned with her weight, so to honour her, we threw her scale in the middle of a lake behind her house. 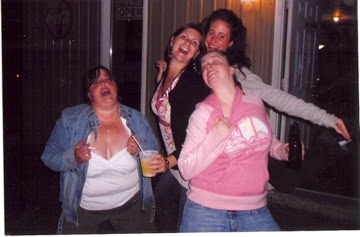 Then we hit up a local bar. It's what she would have wanted.

When I got married, she flew into town to help me pick my dress and then flew in AGAIN for my bachelorette party (which, I also can't seem to find pictures of. Sorry I suck.). Another pal of ours got married in NB, so that meant some bonus trips, but I think we only saw each other about 10 times in 5 years.

During the first two years of being a sicky-face, she was one of my most supportive friends. When Marc and I moved back to Fredericton two years later (bringing the sickness timeline to a whopping four years now, boo) we picked up where we left off, which loosely translates to slightly more mature antics on Saturday nights.

To celebrate this momentous occasion, we're going to have supper at our old university hang-out. They have a sandwich called The Fatty Fatty, which is a triple-decker grilled cheese. It's been years since I've had one. I'm super pumped.