Over the years, I've found that I really only get into excercising if I trick myself. I've bounced from indoor rock climbing, to salsa classes and pole-dancing lessons. When I was living in Ottawa, I met a great friend who I'll call Doc (as he recently completed his PhD; woot woot!) and he decided that we'd work-out harder if we had something to train for.

Doc was, and is, one of the funniest people I've ever met. After talking to him for ten minutes on the first day of grad orientation, I realized I'd met a hilarious genius.

Like, the kind of guy who'll probably be poached by some governmental agency to develop a new breed of fighting squirrels with genetically modified armour. For reals.

Now, Doc and I have two different versions of how things went down. Obviously, my version is the truth.

We'd just finished up our salsa class, which was super freaking fun, and were looking for something else to do. Doc suggested that we run a marathon. I googled how long a marathon was and was like,

"Not a freaking chance."

He regrouped and two days later, managed to talk me into signing up for the half marathon. I would also like to note that he'd already registered me by the time this second phone call happened. Fact.

"It'll be easy," he said. "I've downloaded a training schedule. Now, it says that you should be running consistently for at least six months before attempting a half, but we've got just under three months and should be fine. I mean, we're in pretty good shape already so that must apply to people who don't do anything."

Did I mention that I'd never run for longer than 10 minutes in my life?

So, he emailed me the training schedule and we started hitting the pavement. Doc also went out to the site and drove the route. He was delighted to tell me that there weren't any major hills, so we wouldn't have to do as many hill sprints.

There were people everywhere. Hard core runners. Runners with mitts and bodysuits and stopwatches. I was dressed in my cute pink jacket, matching sneakers and lululemon pants. No bodysuit. No stopwatch. I should have taken that as a sign. I didn't.

The first 3k's were fine. I was going at a pretty good pace. Then, my ass started to hurt. A kilometre later, it was burning. Half a click after that, I thought my pants would catch on fire from the scorching pain. Turns out that the middle 16k have a gradual but significant pitch.

Doc had trained for hills, even though he'd told me he wasn't going to. At the 6th kilometre, he was gone-zo. Then, another friend who was running the 10k flew by me, waving.

I was alone for the majority of the run, with the exception of seeing my Mum and her husband at the halfway mark (supportive parents really are the best). Of course, I'm playing it a little fast and loose by calling it a "run" as I totally ran out of steam (ha) shortly after that.

I also had to pee but was not really feeling the port-a-potties. Oh the things I didn't consider before signing up Doc bamboozled me.

At the 15k mark, I stopped and had a small chat with a wonderful family who'd set up a makeshift water station at the end of their driveway. It'd been over an hour and a half at this point and I was hungry. Being an idiot, I ate approximately three pieces of melon before the race and I was starving. I tried to suck back one of those liquid protein packs but it was so freaking disgusting that I couldn't swallow. Luckily, the family had cut up oranges and water. According to them, I was in last place and they hadn't seen anyone for a while. Not that I really cared. After a few oranges slices, I said my thanks and continued on.

At the 18k mark, the road started to go downhill. Thank god. I flew along, proud of myself for not giving up (not that I had much choice). People were lining the course, cheering, so that helped too. I saw the finish line in the distance and had to choke back tears. I saw my Mom, her husband and my friends.

Or so I thought.

Whoever designed the course should have been tied to a tree and pelted with water balloons full of vinegar. Apparently, the last 1.5k were AROUND the starting/ending point! I literally had to RUN RIGHT BY the finish line and then loop back to actually finish.

When I noticed the deception, I turned to my peeps, jogging beside me (who'd been waiting for me for quite some time) and moaned:

"This was the worst idea EVER."


Everybody laughed and then an old man who could have moonlit as Santa sprinted past me. He also ran the whole marathon (I knew this because our bibs were colour-coded and I was pissed mine was yellow while the marathoner's were purple...clearly purple is the better colour).

After the sado-masochistic lap, I finally finished. 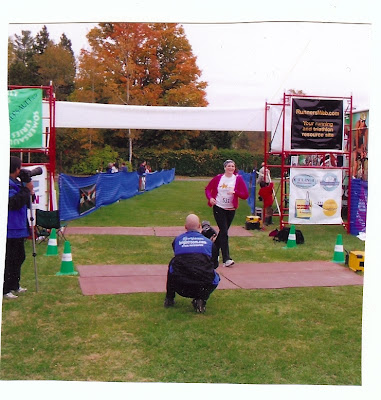 
That put me nicely at the bottom of my age group, but not in dead-last as there were three runners in my group who didn't finish. They're probably still out there somewhere...

I then promptly made my way over to the food tent, ate a bagel and some chilli and then slept for the next 3 days. I kid, I kid...it was really only 2. Oh, I also got a medal. Damn straight! (Yes, everyone got a medal, but that's not the point).

So, there you have it, another Pre-Dirty Thirty FunTime. Well, this wasn't exactly a fun time, but quite an accomplishment for someone who has a love/hate relationship with cardio. And had never run before.

And just for the record, during my extensive 3 months of half-assed training, I never ONCE experienced the "runner's high." Not once. So for all of you who claim that you can run without really knowing that you're running are clearly liars. You really better check your pants for signs of flames.


When I look back on that day, I'm still pretty impressed with myself. Who cares that I couldn't actually run the whole thing? The point is that I didn't give up. I'm amazed that I was able to stick it out for so long. Now that I can't do much more than walking for 20 minutes, it makes me feel good to know that (a) my body's actually capable of doing it and (b) will be again. Although, maybe next time I'll just stick with a 10k. I'm not a total idiot.