So, Saturday night marked the "adult" Halloween (not to be confused with the "child" Halloween, which has decidedly more candy and less vodka). I've been working on my costume for a while, adding to it from last year and also helped make some costumes for the rest of my crew. 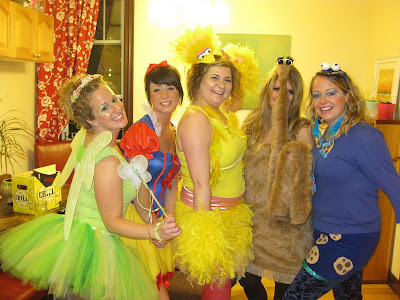 Tinkerbell, Snow White, Big Bird (moi), Snufalufagus and The Cookie Monster.
I added MANY MORE feathers to my own costume and helped out with Snuffy's fur overalls. Okay, so I did more than help but it ended up being a pain because the fun fur kept breaking the needle of my sewing machine. Boo. That meant I basically sewed the whole thing by hand, which you'd think would make things MORE secure...except that I'm not a seamstress.
Not a seamstress.
And that's what this post is REALLY about.
I wanted to title it "Mini-Tutorial: How To Fix A Halloween Costume in a Porta-Potty With A Stapler" but that would've been a tad bit too long...
So, we're all at the big Halloween party downtown and poor Snuffy's strap broke. The velcro was slightly too powerful and I only hand-stiched one side (It made the needle all sticky so I gave up. I'm sure there's some other way but, again, I'm NOT a seamstress).
Luckily, we were on it.

So there you have it: on-the-fly Halloween tailoring, Sesame-street style. I should also mention that when you fall out of the porta-potty in matching theme costumes...well...let's just say you get quite a bit of attention.
ps. If you run into someone in the same costume, also home-made, feel free to judge just how much better yours is.
Happy Halloween!!