After a day of tests at my doctor's office in Ontario, my part-time-hair-model pal and I were in the mood for pancakes, hash-browns and swiss-cheese-chicken-sandwiches. Naturally, that meant Denny's. I whipped out Fiona, my AyePhone (she's a pirate), and used the GPS to locate the nearest restaurant.

Downtown Hamilton isn't exactly a shiny and happy place, but it was the middle of the day so we didn't think much of the boarded up buildings and sketchy neighbourhoods. 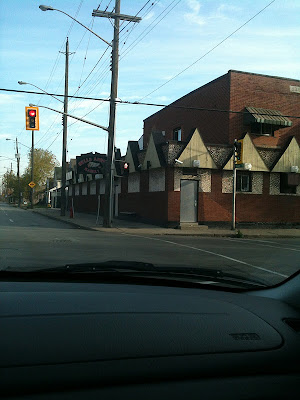 Then, we stopped at a traffic light and I noticed something. Can you see it? 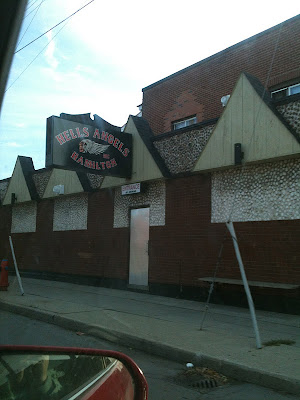 You know you're in a sketchy city when gangs can advertise. Just sayin'.

Oh, and Fiona played the most awful trick on us, after leading us around the seedier parts of Hamilton. She claimed we were "at our destination" when, in fact, we were in an abandoned parking lot of a closed-down elementary school.

Needless to say, they didn't have any pancakes.