So a glorious thing happened about a month ago. After years of waiting, it was finally released. My world hasn't been the same since.

What was this life-changing event, you ask?

The release of the new Zelda: Skyward Sword, for Wii.

I know, I know, I'm a little old and terribly too cool to be into a role-playing adventure game but pretending that I have a SWORD by swinging my arm is AWESOME! Not quite as awesome as the Harry Potter game (super fun) but there's a certain something about beating the crap out of evil red dudes. I also LOVE that I live in a time where there's "walkthrough" sites to tell you how to get through the levels. Like the post title says, I'm really only 30% of a gamer. When it gets too hard, I'm not interested.

So when I was in Future Shop in the summer, I saw a tag that I could take to the cash and pay a $10 deposit for when the new Zelda came out. They had no idea when it would be but I didn't care. There was no question that I was going to want it, so I figured I might as well be on the pre-order list. Many many months later, I saw on TV that the game had been released.

Slightly miffed that Future Shop hadn't called to let me know, I went in the next day. As I walked in the front door, I had a whispering memory of the cashier saying "you'll need to hang on to your receipt." Opening my wallet to the "special things" slot, there was nothing.

I was already there so I decided to just go in. Walking to the gaming department, I found a tall dude with a huge afro. Awesome. I told him that I'd pre-ordered the game but didn't have my receipt. He said that someone had tried to do the same thing the day before (when it actually came out) and they didn't let him. When he saw my fallen face, which was beneath my spirit hood 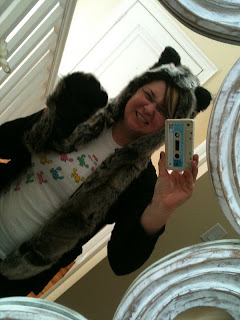 I wasn't quite making this expression....

He offered to get his manager. After waiting FOREVER, the manager appeared. He asked me when I thought I put down the deposit.

"Uhh, well it was hot out, so some time in July or August?"

A few clicks later, it was clear to both of us that the computer system had crashed. The biggest hint being the black screen. A flash later, everything snapped back on. Filling out the form request for a second time, he pressed "send" and the screen went black, again. Twenty minutes later, he prevailed at another computer terminal. However, his persistence didn't pay off as nothing came up.

I'd now been in Future Shop for 35 minutes.

I was sad that the deposit was gone but still wanted the game. Wal-Mart was selling it for a dollar less, so I asked them if they price matched. They did, but it involved having them call the store to see that they have it in stock. Then they'd meet the price and beat the difference by 10%. So, we're talking about a whopping dollar and ten cent difference but I'd already lost ten so I was trying to avoid any further ones.

The manager came back at this point and saw that I was standing with the first guy, who was on hold on the phone. When he asked me what he was doing, I explained the price match. The manager laughed and said that for that small of a difference, he'd just do it. He led me over to another kiosk, where there was a stapled bundle of paper with different highlighted names. Lo and behold, my eyes wandered down the list and - BAM - there was my name!

"Look! Look! It's me, IT'S ME!!" I said gleefully. My spirit hood falling to my shoulders.

"You mean that guy didn't look at the list before coming and getting me?" The manager asked.

"Of course. Sorry that it took so much longer than it should have. The seasonal staff here aren't trained well. And wow, it says here that you were the first person to pre-order it here. In June."

He smiled at my enthusiasm like he'd found a cool and unexpected gamer-buddy.

We chatted as we walked to the cash, armed with the copy of my deposit and the manager's price-match form. He were waiting in line when he told me that the deluxe edition included a CD of all the Zelda music.

Me: "What, so I can relive all of my Zelda glory while driving?"

The very helpful and nice manager who'd spent forever with me because I was a jackass who didn't remember my receipt: "Uh....well you can." *Immediate tomato face* Not that I do..." *stutter* "but some people like it".

To make up for my insensitive remark, I gave him a shout-out on Twitter AND filled out the questionnaire on the back of my receipt. Hopefully Santa views that as an even-out situation.