Since turning the big 3 - 0, I've been back on Weight Watchers. The stronger steroid I'm on (Medrol) has basically given me a boob job and I can't do up my winter jacket without squishing them down. It's ridiculous and totally true. Also, my chin has officially become one with my neck and although it's going to take a lot of effort, I'm going to try and take off as much of the excess weight as I can. It's hard to stay focused because it's easy to play the "medication" card but the reality is that it's freaking freezing up here and will only get worse for the next two months. I'm too cheap to buy a new winter coat so the bubbies need to shrink. Plus, the neck roll's got to go.

As such, I've banished junk food from the house (officially after my family left for Christmas). It's been going well so far and I think that by the end of the month, the zipper on my coat won't groan when I do it up. Yay!

I haven't had an intense sugar craving in about a week but last night, one hit me full force. And by that, I mean directly in my face. Or, more specifically, my mouth.

My mother bought me this funny chocolate for my birthday. I LOVED the Little Miss and Mister books when I was younger so when she saw an edible Little Miss Sunshine, she couldn't resist. 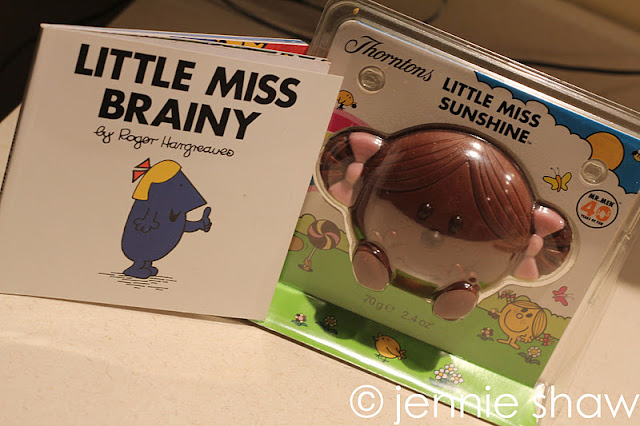 I thought I still had the Little Miss Sunshine book but all I could fine was Little Miss Brainy. You can see by the comparison just how big the chocolate was - just about the size of my fist.

Drinking a cup of decaf Earl Grey tea, Little Miss Sunshine stared at me from the table under our living room window.

Eating half of a cut up apple and tablespoon of peanut butter, Little Miss Sunshine taunted me.

Finally, after another cup of decaf Earl Grey tea, I couldn't help but think...

I wonder if that chocolate would be any good? 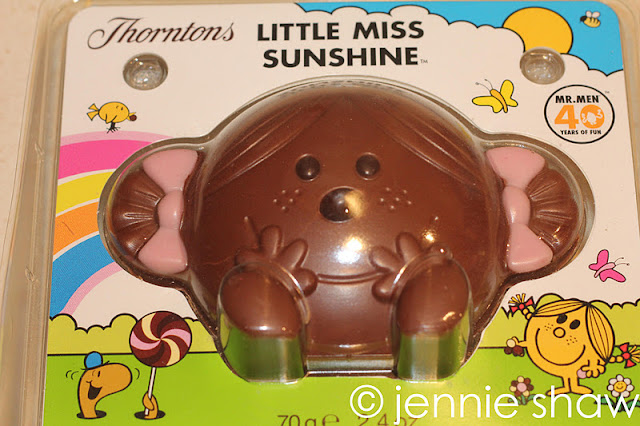 Really looking at the chocolate, I saw how detailed and cute it was. Easter bunnies come in similar packaging and the chocolate really isn't that great. It's not awful, but it's not awesome. The name Thortons was familiar but not enough so for me to remember if it'd be good chocolate or so-so chocolate.

So, I called my Mum who told me that it was middle-range chocolate. Thortons is mostly known for making caramel (where the name was familiar from) but she said that their chocolate was pretty popular too.

Left with the dilemma of breaking open and eating such a cute piece of chocolate only to find it grainy or gross, I weighed the options.

And then cracked open the package. 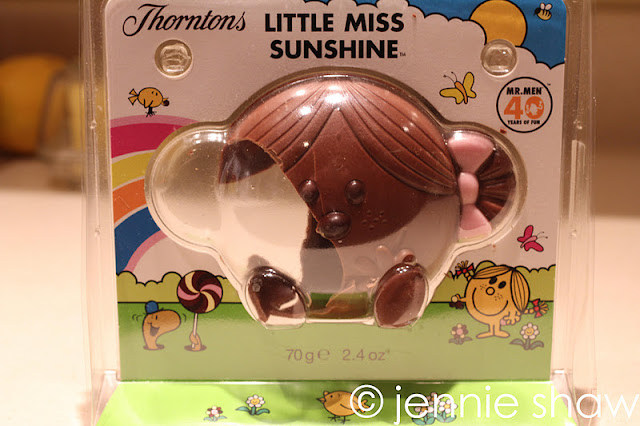 This is what remains.


The good news is that the left side of her face satisfied my craving but it really wasn't that great. Just as I'd been told, it was middle-range chocolate. I'd had enough after a few bites. Now I'm left with 2/3 of a chocolate Little Miss Sunshine. Not enough for me to smile at its cuteness but it's not good enough to make me want to eat any more. I guess I'll throw it in a Ziploc bag and pop it into the freezer for another desperate time.