I loved you. All three of you.

But something bad happened yesterday and now everything has changed.

I remember when I first saw you, clustered on a wall in a store in Collingwood, ON. The silly workers had stuffed you full of black rocks and a few seashells. Amateurs. I knew that you had more potential though, so after being carefully wrapped in paper, you came home with me.

Tried as I might, though, I just couldn't find anywhere to put you. That is, until we moved to New Brunswick and suddenly things made sense. The wall at the top of the stairs needed something and that's when you made your move from the cardboard box we schlepped you here in. I went to the dollar store and bought faux pussy willow branches, some long brown leafy things and a few bunches of green grass. 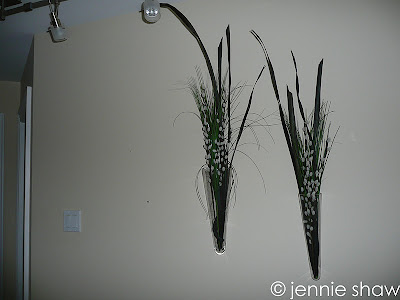 You really were beautiful. As a set, anyway. Now, though, with just the two of you, things just look kinda awkward. Especially with the one screw that used to attach you to the wall still hanging on (upon reflection, perhaps having only one screw wasn't the most secure of ideas...crap).

My flailing elbows often get me into trouble but I still can't believe they're responsible for your destruction. I wasn't even in a rush...just walking by and - SMASH - down you went. Then you covered the floor with your little bitty pieces. 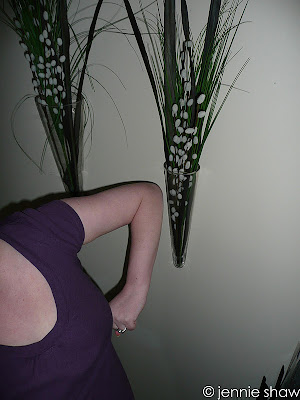 Reenactment of what went down. Stupid appendages.

Yes, there are two of you left but without the third, you're a hot mess. I even bought silver sparkly sticks to shove in you - on sale, no less - but that's all over now. 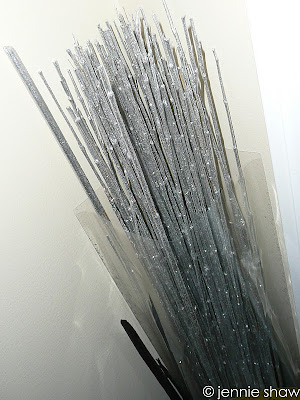 Aren't they pretty? What am I going to do with them now? Boo.

So goodbye, beautiful hanging vases. Sorry that I'm such a clutz.

You will be missed.

The worst part is now I have to put something else there and I have NO IDEA what that will be.

Email ThisBlogThis!Share to TwitterShare to FacebookShare to Pinterest
Labels: Letters to Nobody, Winter Whispers (but loud)