This week, I’m reviewing this!

Many months ago, I read my first little black dress book. At the time, I had positively no idea what that meant. Then I hit up a sale at my local bookstore and noticed another author with the same little logo on their cover. Since I enjoyed the first one so much, I threw One Night Stand into my cart. Not that I had a cart, per say, but you get my drift.

I’m not going to lie, I think that I’ve fallen in love with little black dress books. They seem to have straddled themselves between women’s fiction and chick-lit. And what a wonderful place to be.

In stark contrast to her professional life, Eleanor is kind of a prude. Nothing too intense, or preachy, but she definitely doesn’t get out much. Then, one night, a mysterious stranger comes into her neighbourhood bar and they leave together after Eleanor’s shift. The bummer is that she was far too drunk to remember to use a condom. Or remember his name. Or anything about him, generally speaking.

**Side note: I find it very frustrating when sex scenes in novels don’t include the use of birth control. It’s terribly unrealistic, considering the times, and I don’t think it sends the right message. Wrap it up, people. WRAP IT UP! Especially with strangers. ALWAYS WITH STRANGERS. Okay, rant over.**

So with her best friend and a private investigator, Eleanor sets out to find her one night stand and tell him that he’s going to be a father. Too bad all she has to go on is his vague resemblance to George Michael (post-Wham, pre-bathroom arrest – this is Eleanor being specific, not me, and yet another reason why this book rocked so hard).

Ms. Cohen created two characters that are freaking awesome. Awesome and authentic. I LOVE me some British chick-lit and this one didn’t disappoint. It’s funny, touching, and the pace is so quick you’ll think it’s a novella. I’m a sucker for an author who can present big-time emotional issues in a light way and Ms. Cohen hit this one out of the park.

So this is a full-out BUY THIS BOOK RIGHT NOW kind of review. I’m going to be on the serious lookout for other little black dress books. Just like the actual dresses, I don’t think you can go wrong with one.

And in other book-related news, remember that contest I entered last week? Well I WON!!! YAYAYAYAY!!! As the winner, I get my first signed copy of a novel, ever!! And I actually get TWO novels!! AND bookmarks!! Thank you SO MUCH to those who voted for me!!! Obviously, I wouldn't have won without you!

You know what that means!!

YOU get a (virtual) cupcake! 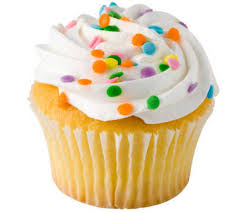 YOU get a (virtual) cupcake!

(Virtual) CUPCAKES FOR EVERYONE!!!

I'll show off my SIGNED AUTHOR COPIES once they arrive!!

Have a fantastic weekend, everyone!!