Why All Customer Service Reps Should Have Southern Accents

About a month ago, my blender tried to kill me.

Okay, it wasn't like it grabbed a knife and chased me around the kitchen, but it did unleash a cloud of smoke and spit a million pieces of tiny black bits of plastic around my kitchen.

I was making my standard breakfast of a frozen fruit smoothie just like any other day. Frozen peaches, bananas, strawberries, yogurt and veggie juice: the breakfast of champions. Even though the fruit and berries are already cut up, I blend the smoothie on a low setting for a minute or so first and then pop it on high.

It was in Blender Phase 2 that everything went down. Literally.

I was putting things back in the fridge/freezer when I heard a thump. Just as I turned around, the blender hopped, nearing the edge of the counter but that wasn't the big deal.

The BIG DEAL was that the glass part of the blender had completely filled with a white smoke and the blender's usual loud blendy-noise was almost deafening. Freaking out, I unplugged the unit. The SECOND I did, though, my ENTIRE smoothie rushed out the bottom. Freaking out, again, I picked up the glass pitcher to put in the sink, which is when the teeny plastic attack began.

In less than thirty seconds, my kitchen counter was covered in smoothie, black bits of plastic and my house smelt like burnt rubber.

Naturally, I wasn't going to take The Attempted Murder sitting down. And the longer I scrubbed my kitchen cabinets, sticky with fruit and yogurt, the madder I got. By the time I'd wiped down, cleaned and collected as many black plastic bits that I could find, I was fuming (ha).

Dear @KitchenAidUSA: Your blender tried to kill me this morning by almost catching on fire and spitting bits of plastic everywhere. #fail

A few minutes later, I was contacted by customer service and they gave me a phone number to call.

Charged up, pissed off and ready to lose it, I called. I mean, this blender was NOT cheap and had broken a WEEK after our year's warranty expired. Oh yeah, I was going to let them have it.

But then, something happened.

The phone rang twice and then I was greeted by a woman with the most disarming Southern accent.

Rep: "KitchenAid Canada customer service, how can I help you?"

I live in Canada. I Tweeted KitchenAid in the USA who gave me a Canadian contact number. Why is the Canadian customer service line manned by a Southerner? No. This is a trick. Stay on-course, Jennie. Let 'em have it!

Me: "My name is Jennie Shaw and I got this number from your Twitter. I have a file started and its number is {whatever the number was}.

Rep: "Ma'am, please let me put you on hold while I read through your file."

Did she call me Ma'am? What is it about a Southern accent that's just so soothing? I think I like it. Yes, I like it a lot.

Rep: "Ma'am, I am so sorry this happened to you. Are you all right?"

I wonder where my giant sunhat is? I should find it, make some sweet tea and hang out in my rose garden. Focus, Jennie. You're mad, remember? Wait, did she just apologize and then ask me if I was all right?

Rep: "You're sure that you're all right? That must have been really scary."

I like Southern accents. They're so smooth. It's like listening to a poem. Wait, did she just ask me if I was all right, again? And did she also sympathize with me?

Rep: "Please know, Ms. Shaw, that this is a highly unusual story. Your safety is our first concern so I'd like for you to tell me what happened so I can forward a report to our technical department. Please know that we that we are so sorry this happened."

I wonder if this rep has a rocking chair on her front porch. She probably does. Maybe I should ask her. No, I called this number to get mad. Why was I mad, again? Oh right, because my blender tried to kill me.

Me: "Well safety should be your first concern, considering it pretty much caught on fire. Not that there were flames but there was a lot of smoke. And then my smoothie went all over my counter and onto the floor. Little bits of plastic shot out everywhere and my house smells like burnt rubber."

Rep: "Our technical department will want to know every detail you can give them so this never happens to anybody else. KitchenAid makes great products but that doesn't mean there aren't any problems. When I first bought my stand mixer, it didn't work at all...{proceeds to tell me a very long and detailed story about how her stand mixer was fixed}"

Why is this rep telling me about her own problems with KitchenAid appliances? Doesn't she know that all of the customer service calls are recorded? I hope she doesn't get in trouble. Maybe I should write an email or Tweet how helpful she's been so she doesn't get canned. Wow! We've been on the phone for almost half an hour! I bet if we lived in the same place, we'd be friends.

Me: "Well that sounds like an awful story! I'm happy to hear that you got a new one."

Rep: "And rest assured, Ms. Shaw, that I will be sending you a new replacement blender, complete with new warranty, as soon as we get off the phone. Would you like the same colour?"

Well isn't she just the nicest customer service rep, ever? She probably goes to football games on the weekend and then has a bunch of people over for a BBQ. Ooo, a BBQ'd chicken burger would be good for lunch...

Me: "Actually, the store didn't have any white ones when we bought it, so I'd love a white one instead of pewter. It matches my stand mixer better."

Rep: *laughs* "Oh yes, it's very important to have everything match. I'll send a white one out to you right away."

Why can't I have a Southern accent?

And if the phone call wasn't enough, the rep called my house a week later to make sure that (a) I got my new blender and (b) that it was working well and not catching on fire. 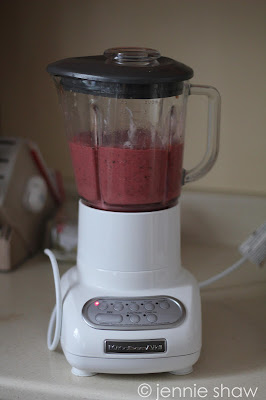 A follow-up call? From a concerned Southern customer service rep? To check that my replacement appliance was working well?

So here's what I learned:

(a) I cannot stay angry at someone who has a Southern accent.

(b) Especially one who apologizes and then tells me about her two sons (who are in college and doing well, by the way).

(c) KitchenAid is a pretty smart company as they're aware the effect Southern accents have on those not from the South - other companies should take note.

(d) I want a Southern accent, myself.