E-Books as Equalizers/This Would Make My Life Way Easier 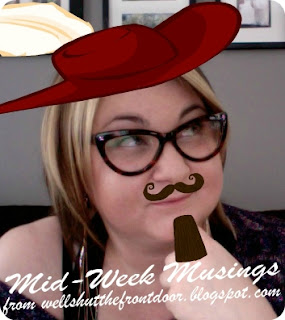 For the last few weeks, I’ve been hard at work writing my latest manuscript, Robin’s A Little Hood. It’s pretty much the most fun I’ve had writing and I just passed the halfway point at about 42,000 words. Hopefully I’ll have my first draft finished in the next few weeks (eeeeeeeee!)

Anyway, because of the writing, I’ve taken a small reading break. There last thing I want to do after writing fiction all day…is read fiction. Especially fiction that’s not-so-great. Or, even worse, reading fiction that’s so amazing it makes my own seem like the worst thing ever amateurish. But, I can’t not read so, while writing a new manuscript, I pretty much stick to non-fiction.

And whether it be fiction or non-fiction, I primarily read "real" books. I got an e-reader for my birthday this year and although it's pretty cool, it just can’t compete with real books. For me, picking up a book is an experience. I want to touch the covers and read the back flap. I love the crack from opening the cover for the first time and there’s nothing like the smell of a book. Whether old or new, a book smells awesome. That being said, sometimes real books are more expensive, which is when I turn to my e-reader.

Funnily enough, my brilliant idea came about when I was reading a real book.

Instead of just coming out and telling you about my brilliant idea, first I want to explain why it's a good idea. You know - set it up so that you're SUPER excited by the time it's revealed in the end. Oooo, the tension...can you feel it? CAN YOU?

We had a very limited amount of television when I was growing up and because of that, my general television knowledge starts in about 1997. As such, there are a lot of older actors, shows and movies that I've never heard of. Currently, I'm reading Andy Cohen’s memoir Most Talkative and the first few chapters were chalk-full of random pop culture references I knew nothing about. And it made me sad because it was like hanging with a group of cool kids and not understanding any of the inside jokes.

Which is when I had my lightbulb moment.

What if the references he wrote about had link that automatically opened a footnote-like-thing in a separate box? I hate footnotes because you have to scan to the bottom of the page to read them, but if there was a pop-up window (or something) then my reading experience wouldn't be as interrupted.


To illustrate, here's a quote from page 23 of Most Talkative:

"Things weren't much better on TV. This was pre-Real World and Will and Grace and Bravo, so basically you have Paul Lynde being a mean queen in the centre square and Charles Nelson Reilly kibitzing with Brett Somers on Match Game - hardly role models for a kid. So, like many a young gayling, I gravitated toward strong, outsized female personalities -- on-screen and off."

There are a lot of references in that little excerpt that could pose a problem, but if they were underlined (showing that there was a link) then a reader would be able to touch one with their finger (as most e-readers are touch screens) and then  - bam! – a box would appear, explaining the reference. Having a window versus a footnote would also mean there could be far more information. A footnote is supposed to be short and sweet, and you can forget about including pictures, but with a pop-up window, there'd be no real limit because it doesn't actually take up any space on the page. And it wouldn’t need an internet connection because the reference windows would be built into the e-book!

So, for example, if you clicked on "Real World," something like this would appear: 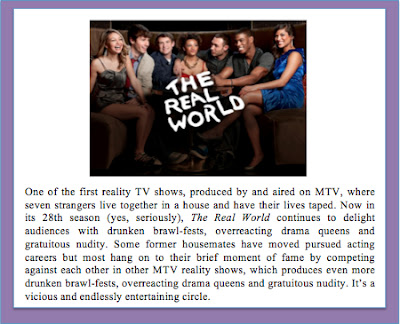 (in case you're wondering, the answer is YES...haha)

Holy cow, guys, if this could happen, it would mean that authors (like myself) would be able to make references to whatever they wanted without fear of isolating readers!

Reactive Prompt: This is where you brain should be exploding.

For reals, though. If I could stop worrying if readers will know what I’m talking about and just focus on writing the funniest best things I can, then this is how I'd feel:

Source.
So what do you think reader/writer peeps? Would you like a virtual better-than-a-footnote, pop-up box (or something to its equivalent)? If you don't think it's a good idea, that's cool, I won't be mad...but I'd love to know why you think it stinks (and we can still be friends, don't worry).