The Nail Files: I Don't Give A Hoot. No Wait, I Actually Do.

This week, I was inspired by a video tutorial on Pinterest. I've never really done "nail art," per say and thought I'd give it a try. I mean, she makes it look so easy!

Spoiler Alert: it was slightly tricky. And by slightly, I mean considerably. 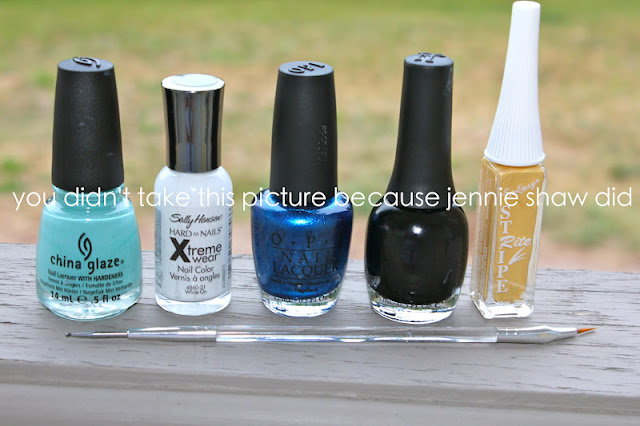 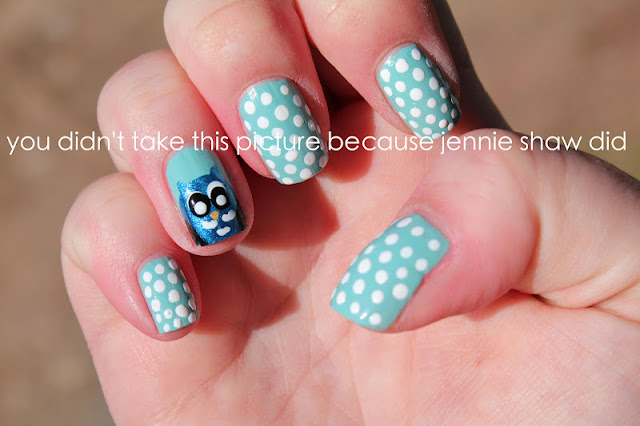 Two coats of For Audrey on every nail, to start.

Then, Swimsuit...Nailed It for the base of the owl. While still wet, I used the brush end of my dotting tool to make the ears.

With the end of a makeup brush, I made two big dots in White On for the eyes (this was where it started to get tricky because it was basically impossible to get two even circles. There were many retries.
Many. Retries.)

Then, using the same make-up brush, two dots of Black Expressionism over White On. It did not get easier and still took a lot of retries.

Back to the White On, I used the dotting tool to make a smaller pupil. Thankfully, this only took one try.

Then I poured a glass of wine because those four steps took over an hour but I'd already come too far to stop.

The tutorial said to make three dots underneath for the feathers and then layer the base colour over them to make crescent moon shapes. Yeah, that wasn't happening as I'd been burned by having to do a thousand re-tries of the larger layered dots. Therefore, I used the brush end of my dotting tool to do some swoops.

Black Expressionism on the sides for wings and then a little Gold for the triangular beak.

The rest of my nails looked mucho-boring next to Hoo-bert (my owl's name) so I decided to genuinely copy the Pinterest video and put dots of White On on the Hoo-bert-free nails.

Even though it took me the entire day because I'd get frustrated and throw a mini-tantrum a while to finish, I'm still a fan. Not only is Hoo-bert super stylish, but he makes it easy to work puns into everyday conversation. And I love me some puns.

When saying goodbye to someone = Owl'll be seeing you later.

Ordering dinner in a restaurant = Owl'll have the baked penne.

When singing along to Bon Jovi and Jennifer Nettles = W-hoo says you can't go home?

So as you can see, I had a pretty good week. The Remix, however, is more than ready me to switch it up. What a party-hoo-per.