This week, I'm reviewing this baby: 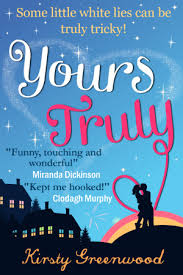 Natalie Butterworth has it all: a winning personality, handsome fiancé, close-knit family and a fantastic career. Except that her personality is kind of nonexistent, her fiancé is a controlling dick, her mother and sister are overbearing and selfish and she works in a teeny restaurant for a boss who has a serious case of bitch-face.

But all of that crap sets the scene for a seriously funny read.

I’ll admit that I was ready to kick Natalie in the shin (while wearing cleats) because she was such a pushover in the beginning, but that changes by the middle of the fifth chapter, when Natalie accidentally gets hypnotized by a pub performer and can no longer tell a lie. Specifically, she cannot lie when asked a direct question. Natalie's spent the majority of her life censoring herself, so, naturally, saying what she’s really thinking comes as quite a shock to those around her.

And let me tell you – she goes from a ho-hum character to one that I want to be BFF's with in less time than it takes to steep a good cup of tea.

Things really go to hell in a hilarious hand basket awry when Natalie's fiancé asks her a fairly personal question, to which she answers honestly. I want to share this scene SO BADLY because it was SO GOOD but I won’t because it would spoil things and that would be mean (you seriously don’t understand the restraint I’m showing right now – yes, it’s really that good of a scene).

The end result, though, is that her fiancé freaks the eff out and tells her that unless she goes back to normal, the wedding’s off. So, Natalie sets out to track down the pub hypnotist and get him to un-hypnotize her so she can go back to being a people-pleaser and marry the loser her fiancé.

Fun women’s fiction is often formulaic in its plotline and Yours Truly stays…well…true to that form. However, it’s Ms. Greenwood’s amazingly-funny wit that takes the story to another level. In that regard, she’s similar to Sophie Kinsella, if Sophie had one too many glasses of Chardonnay and decided to substitute the f-bomb with “pickle” (which made me laugh EVERY time, by the way). And once I hit that fifth chapter, I couldn’t put it down. Except to grab a tissue to wipe the tears of laughter from my face.

I highlighted a lot of passages while I was reading but feel that this one pretty much captures everything I’m talking about:

The one time I dared venture into the outside world was to get a much needed bottle of milk from the corner shop. Only the shopkeeper, Irene, asked me what I thought of the jumper she was knitting for her husband and I told her that even if I was stranded, stark bollock naked in deepest Alaska with only a perverted old Eskimo with skin disease to keep me warm through intimate cuddling, I would still refuse to wear it. To be fair, it had a Siamese car knitted into it and its whiskers were actual pieces of silver wire sewn onto the cat’s cheeks to look like real whiskers. But still. It was incredibly rude and clearly hurt her feelings. So going out? Not such a grand idea.

Oh right, I forgot to mention this is BRITISH women’s fiction.


Yeah, I know. Shiz just got even real-er.

Plus there’s a FANTASTIC supporting cast, who each hold their own, and there are enough side-stories to keep you engaged and rooting not only for Natalie, but for the entire cast of characters. And when was the last time that happened? For me, it’s been a while (if ever).

So, folks, although there isn’t a whole lot of detailed information in this review, it’s because Yours Truly is so awesome that you need to experience it for yourself. Do yourself a favour and spend the three bucks on this fantastic debut.

You can thank me later.

And a big thanks to Heather and Katie for hosting Book Club Friday!