HPRT2012: Lesbians Do It Better

Here's the deal: I've been to a lot of weddings. Not like Katherine Heigl in 27 Dresses, or anything, but enough to feel comfortable in making the following sweeping declaration:

Because when there are two women involved, shit gets done.

Let me explain. A week ago (plus one day), The Remix and I were gearing up for the featured event of our Happypants Reunion Tour (aka, our visit to Toronto):

Yes, people, you read that right. When you combine their last names, it makes McKLove. If that isn't a meant-to-be-sign, I don't know what is.

But that's really this-couple specific. Not every lesbian couple can combine their last names into the killer hybrid that is McKLove. So are you ready to read all the reasons why lesbians are way better at throwing weddings?


Then let's get going!


(Slight Disclaimer: All I had was my camera phone so these aren't the best pictures. You still get it, though, so it's cool.)

First off, there were chalkboards everywhere with cute personalized touches. The super-adorable McKLove guestbook had everyone photographed while holding small framed chalkboards with a wish or a thought for The McKLoves. Then the photo was printed out and inserted in the guest book where you could write a note next to it. Amazing.

However, I don't have any pictures of that because I was too busy doing this:

The very second I saw Lo and Liza, which is when we pulled up to the venue, I started to cry. For the rest of the evening, I was that gal - the one who would.not.stop.crying. It was ridiculous but that's the kind of vibe the night had; their love was literally overwhelming and I couldn't control myself.


(For those who I didn't meet personally, I'm sure you know who I am now and you were right to stay away. Even The Remix wanted to ditch me at one point and he's bound to me by law, so I don't blame you one bit. If we have the chance to meet again, I promise to be considerably less sobby. Moving on.)

Anyway, back to the amazing chalkboards. There was also this one: 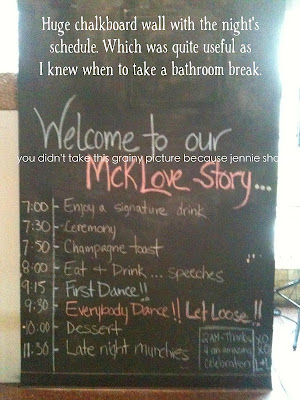 The venue was bananas: 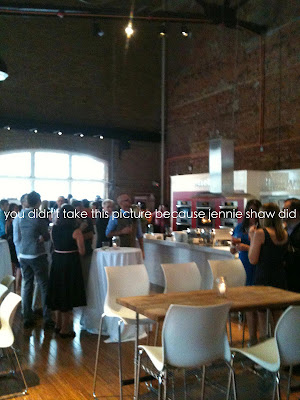 The ceremony took place in front of a huge window, in a small section of the venue that overlooked the downtown St. Lawrence Market. 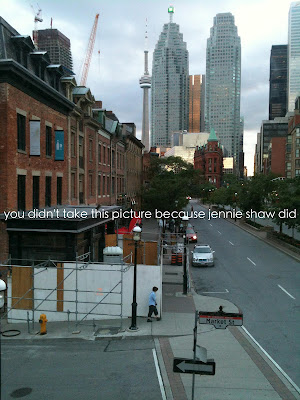 From the construction wall up, it was beautiful view. And to be fair, you really didn't see the wall until you were right next to the window and who the heck stands right next to a window, looking down during a wedding ceremony? Okay, enough about the wall.

When the music started to play, all eyes turned to see Lo, in all of her radiant beauty, walking towards her teary-eyed future wife.

And, as I stated earlier, I was too busy doing this to take any pictures of that.

After Lo arrived at the front, the music was turned off and the ceremony officially began.


Then Lo and Liza did this: 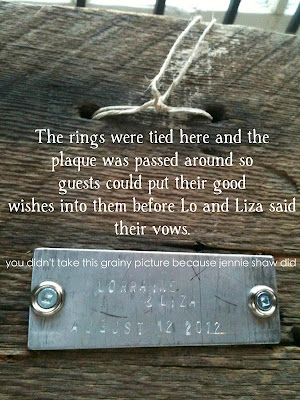 I didn't actually get to touch it because I was an hysterical disaster sitting outside the defined area but I got a good look at it and sent the rings all of the loving vibes I could.

Then, Lo and Liza took turns sharing the reasons they McKLove one another and how their lives had changed since meeting and falling in love. 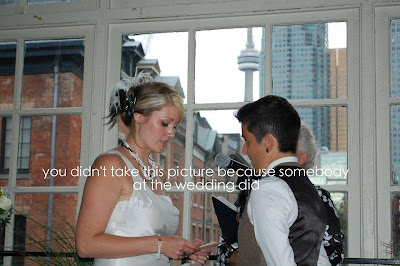 While I did this:

(Lo asked if they could kiss after this part, which was extra-mega-touching and, frankly, didn't help in controlling my weeping. She's selfish, that Lo McKLove - haha!)

Then they exchanged their vows. 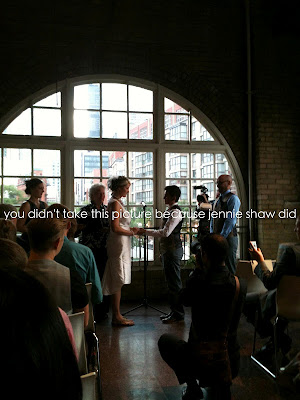 While I did this:

Thankfully, the ceremony was over quickly after they exchanged rings. Which was good, because I was exhausted...and dehydrated. And just to be clear I have

cried like this at a wedding before (including my own, which The Remix couldn't help but point out - sorry, babe). I mean, I'm no ice queen but this was unlike anything I'd experienced before. There was just something about the The McKLoves that left me unable to do anything else.

I mean, look at them! 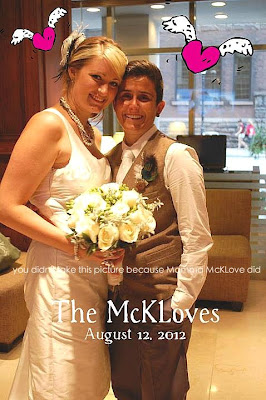 I added the flying hearts to represent the bubble of love they exuded. As you can see, it spread out pretty far.

After everything was signed, sealed and delivered (so-to-speak), the party got started, which is when The McKLoves showed their true wedding-design flair.

The food was crazy. I have no idea what we ate, but it was all delicious. 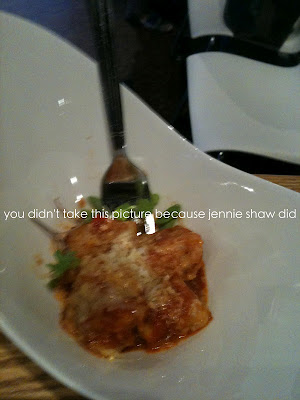 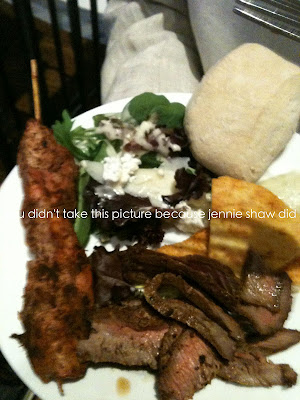 Instead of a wedding cake, The McKLoves had cupcakes. And instead of one flavour, they had TWO! 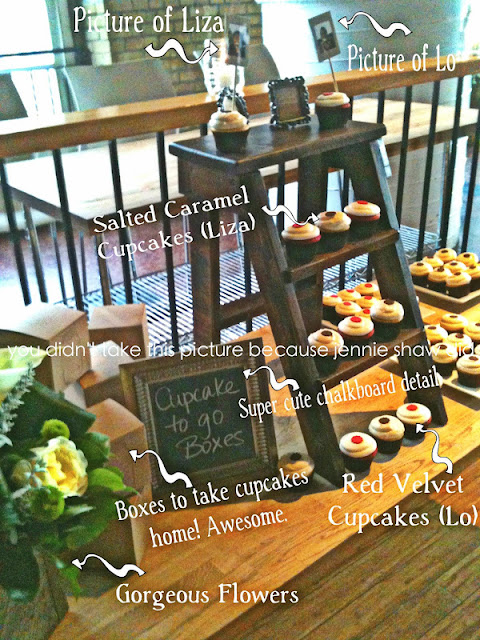 And instead of having one feature drink, they had TWO! 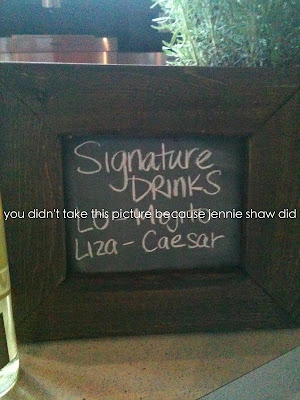 Lo's was a mojito (my watermark blocks it here. Whoops!) Also, please note the chalkboard sign.

At 10:00pm, they brought out the dessert. And it wasn't any old dessert. Oh no! This was an all-you-can-stuff-your-face-with S'MORES BUFFET! 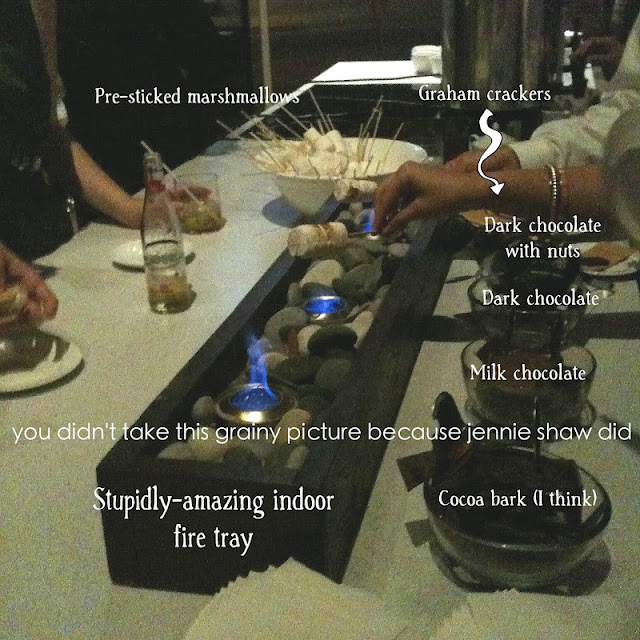 And in between stuffing our faces with s'mores and midnight sliders, there was a whole lot of this:

Fairly accurate demonstration of my skills, although I was dressed better.

So, basically, the McKLove-fest wedding was one of the most wonderful weddings I've had the honour of attending. The vibe was so awesome, I wanted to jar it. And speaking of jars, if you're still not convinced that lesbians throw a better wedding, take a look at yet another example of how they worked their Market theme: 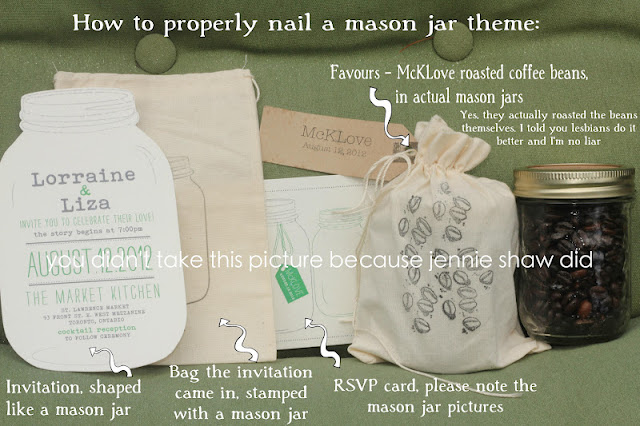 There were also mason jars with tea-lights decorating the entire venue. They were, like, everywhere.

I rest my case.

So if you live in the GTA and want to throw a lesbian-level wedding, here are the venders/services The McKLoves used for their special day:

Oh, and if you remember, I had a slight dress emergency in the weeks before this wedding. Here's what I ended up pulling together: 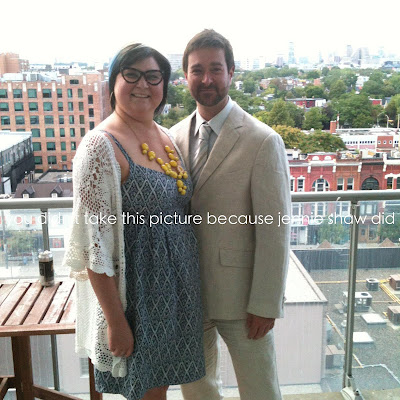 Cute, cool and coordinated. And I'm not just describing The Remix.

Thank you so much for including us in your day, McKLoves! We're so happy that we were able to celebrate with you! Much McKLove to you both and we hope you're enjoying your lakeside Homo-Moon! (Do I really need to mention how much I McKLove that? Nicely, done Liza. Nicely done).