After a whirlwind trip back to Toronto, we're back. If you follow me on Twitter, I was tweeting our adventures under the hashtag #HPRT2012, which stands for Happypants Reunion Tour 2012. Instead of photo dumping, I'm going to split up the pictures into a few posts. Not only will this keep me somewhat sane (because I took many pictures) but it will give me time to put together a fitting post about the wedding we went to. Yes, it was that awesome.

We stayed with my brother, Baby Jamie, in his pimped out downtown condo. Let me be clear. His condo is legit. It's  a two bedroom, two-story place with a phenomenal view of the northern city skyline. Truth be told, I didn't take one darn picture of the inside of his condo because we spent most of our time on the balcony. 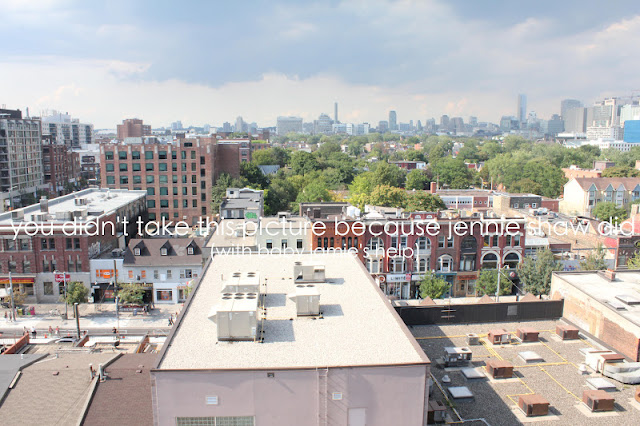 Can you blame me for wanting to sit outside? You can see FOREVER! Well, not to the Northwest Territories but you get my drift.

After an epic night on the Urban Patio (read: my friends' backyard but Urban Patio sounds way chic-er and also like a place you'd want to get on the VIP list for, but you can't - it's invite only and we made the cut *snaps*) The Remix, Me, and Baby Jamie headed back to his place.

The second we got inside, we were all ravenous. Luckily, Baby Jamie's 9th story balcony has a natural gas line and a BBQ. Like I said, it's a pimped out palace. It had been threatening to rain all night - and did, a few times - but when we got outside, the storm had moved east. The lightning, though, lit up the sky like something out of War of the Worlds (minus the alien invaders, obviously) and I declared that I wanted to take some pictures.

Baby Jamie: Here, let me help you set up the camera.

Baby Jamie: Seriously. That's a really expensive camera and you've had a lot to drink. Just let me set it up for you.

Me, full of drunken outrage: Don't talk to me like that, Baby Jamie. I'm fine. I'm not that drunk. I'm gonna go get my camera by myself and it's going to be awesome.

Then, while still lecturing him on the inappropriateness of his suggestion, and just before I got to the bag, this happened:

Me, after peeling myself off the floor: Right. Maybe you have a point. Please take care of it. Also, do you have cheese for those burgers?

So Baby Jamie came to the rescue and not only saved me from dropping my mega expensive camera but he also set up his tripod so all I had to do was push the button whenever I saw a flash.

Obviously, my non-sobriety put a slight hinderance on my reflex skills but after one kajillion tries, I managed to get a few good ones. 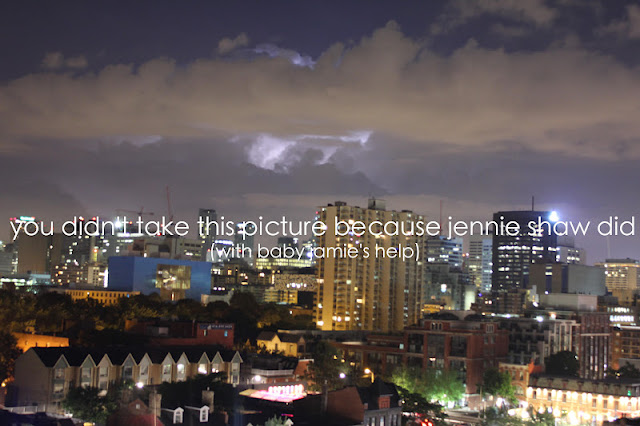 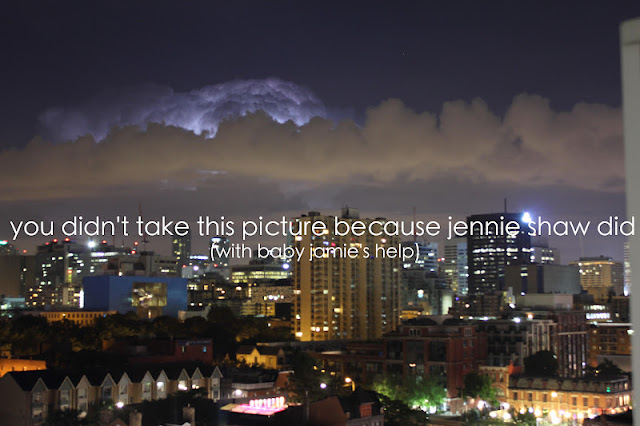 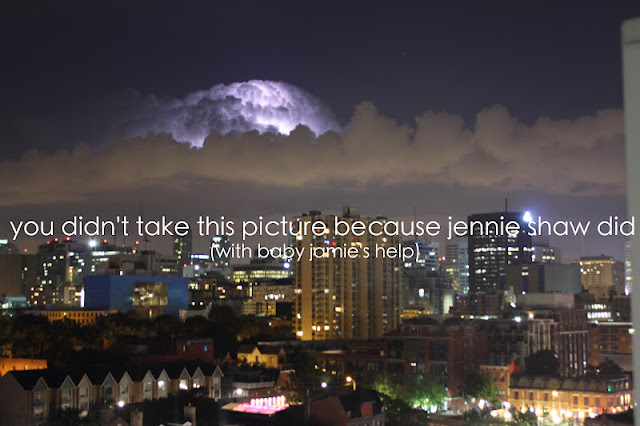 All in all, it was an awesome ending to a fantastic night.

And the burgers were freaking delicious.