If At First You Don't Succeed, Make Friends With The Concrete Guys/Revisions Are Like Real Life

Last week, I wrote a little about the renovation we're doing. It's been going very well, so far, and although there's no possible way we're going to be done by our Aug 8 deadline, it's not a big deal. The Hubby's an electrician so we knew that the lofty five week estimate was...well...lofty. And quality over speed is something we'll pick, every time.

Anyway, a couple of weeks ago, it was time to pour the basement floor. The company who Handy (our contractor) hired was comprised of a father-son team. For the purposes of this post, I'll call them Papa and Junior Concrete. Handy clearly hadn't warned them of my overwhelmingly intense level of enthusiasm but both Papa and Junior Concrete seemed amused by my giggling and desire to capture the entire process on film (I'm going to make an album later. In one of those books you can order online. It's going to be awesome).

They poured the concrete into the basement by sticking the arm/chute-thingy through one of the windows (awesome) and then, with extra-high rubber boots, waded through the wet cement and smoothed the top with the edge of a two-by-four. 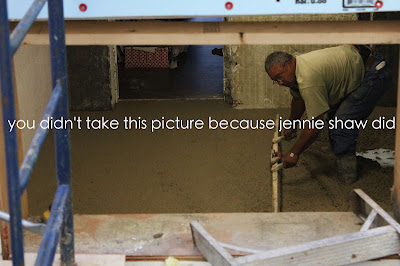 I've always wanted to write in wet cement so I was beyond excited to finally have the chance. I sat down on our existing basement floor and picked up a piece of cut wire to use as a pencil. Without really thinking, charged with the excitement that I was about to do something I'd dreamed about doing, I carved in "M + J." 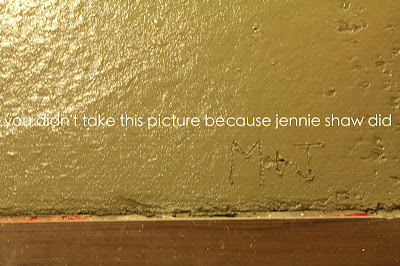 The cement was harder to write in than I thought and by the time I started, the top coat was too crusty for smooth lines. I'm kind of obsessed with having nice penmanship so the jaggedy and uneven writing was something like a nightmare.

But then the Concrete Family came back and I got to do it again! YAY! 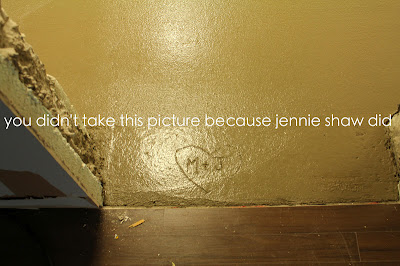 It was on their third trip back when Papa Concrete found me outside and said that they'd put another layer of concrete down, giving me yet another opportunity to leave my mark. To quote him, actually, he said, "It's ready for another scribble." I laughed and asked how many times I'd get to "scribble," and he said I had one more shot before the polishing started. Then, he proceeded to tell me all about the proper way to pour a concrete floor.

Step One: Pour the majority of the floor's thickness, within about half an inch. Smooth with a two-by-four. Let dry.

Step Two: A thinner coat on top of the base coat, to fill in the majority of the gaps. Again, it's smoothed with the edge of a two-by-four. Let dry.

Step Three: A skim coat, just in case the second coat missed a spot. Smooth with a very big spatula (I'm sure there's a technical name but I don't remember it). Let dry.

When he finished, I nodded politely because my brain had exploded.

Because that's exactly how I write a manuscript!! Plus, he said SCRIBBLES, which is obviously a reference to writing!

THEN, my brain exploded AGAIN because he handed me a pencil. "This will work better for your scribbles," he said.

Hello! If that's not a sign, I don't know what is!

So here it is. My interpretation of how pouring a concrete floor is the a perfect metaphor for writing a manuscript.

Step 1 - The First Draft: The Concept.
This is the concept of what I want to write, in its purest form. Naturally, it's completely unreadable because it's wordy, full of major plot holes and slathered with too many adjectives and adverbs. But it's the biggest job, creatively speaking. The base coat, if you will and after all the words have been written, I leave it for at least a week because unless it's had time by itself, I can't see where the metaphorical smoothing needs to happen.

Step 2 - The Second Draft: Amping Up The Drama.

One of my biggest challenges when writing is that I tend to fall into a "realistic" trap, becoming way too invested in wondering if what I'm describing could really happen. Four novels later, I've leaned that this is stupid because I'm writing fiction and it's not supposed to be realistic! Authentic, yes, but not realistic. Why? Because realism is often pretty boring. And why would anyone want to read a boring book? So that's what I do with my second draft - I read through the manuscript and multiply the drama by about a thousand. It's not nearly as intense as Step 1, but it's definitely a solid second coating.

And when I'm finished cranking everything up to an ELEVEN, I usually do a little dance to celebrate my awesome writing skills because I'm convinced that I've just written the greatest novel of all-time.

Step 3 - The Third Draft: Nose-Dive of Despair
After Step 2 is nice and dry, I do another read-through, which is when the gleeful dance and self-back-patting I'd revelled in only days before is replaced with something that looks like this:

Ugh. This is the WORST! I remember this being awesome but it's AWFUL! You were supposed to make it better but it's worse. SO MUCH WORSE. In fact, I think this is the worst thing that's been written SINCE THE DAWN OF TIME. Burn it! No, that's not enough. Get a bat and destroy your computer. IT'S THE ONLY WAY.

After talking myself off the edge of a nearby bridge calming down, I realize that I may have overreacted. No, it's not as perfect as I thought it was but the good news is that a few (significant) tweaks will likely correct most of the issues while tightening up everything else. Which, my friends, is totally the same as Step 3 of pouring a concrete floor. Although there aren't a whole lot of changes to be done, they're crucial to the overall structure and would have been impossible to notice without the rest being so even.

Until a concrete floor is polished, it may look like a great floor but it'll put a hole in your sock and tear the hem of your pants. After a few swipes with the buffer, though, it's nice and smooth. Sometimes it takes more swipes than average, with one corner needing more attention than another, but in the end, the floor is even and shiny. This is exactly what it's like polishing a manuscript. Removing an extra comma, putting one in, switching to a more descriptive adjective - they're all small changes but very important ones because the goal of Step 4 is to make the manuscript flow and only The Most Perfect Words can make that happen. These drafts sometimes seem endless to me, because minor nitpicks can basically go on forever, but it's also when I start to feel like a proud momma and then print it out in full so I can hug it.

So there you have it. My take on why pouring a concrete floor is pretty much the best metaphor for describing how I write a manuscript. Obviously, this means that I'm going to try and work in random concrete terminology when people ask me how my work's going. I'm sure my critique partners will be thrilled.

And if there's a non-writing-related take-away from this post, it's this: always be nice to people who do work on your house because it means you can go from having a weak-ass cement reminder to an awesome one, like this: 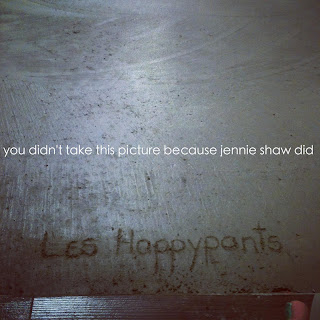 Third Fourth time's a charm (it seriously took me four times, just like the steps. Yeah, this blog post has pretty much written itself).