The Nail Files: THE GREATEST BLUE POLISH OF ALL TIME

After the insane effort required to create Hoo-bert, this week, I decided to keep it simple.

And then, something AMAZING happened!

I was at Sally's and they had a display for China Glaze's Safari Collection, which is where I found THE GREATEST BLUE POLISH OF ALL TIME (and you know that I love blues so this is not a small statement). Yes, it's even better than OPI's Russian Navy (again, I'm aware of the gravity of what I'm writing.) It's like China Glaze was able to sneak into my subconscious and create the blue I've always wanted, even though I didn't even know I wanted it. Sounds crazy, but it's true. TRUE, I tell you! 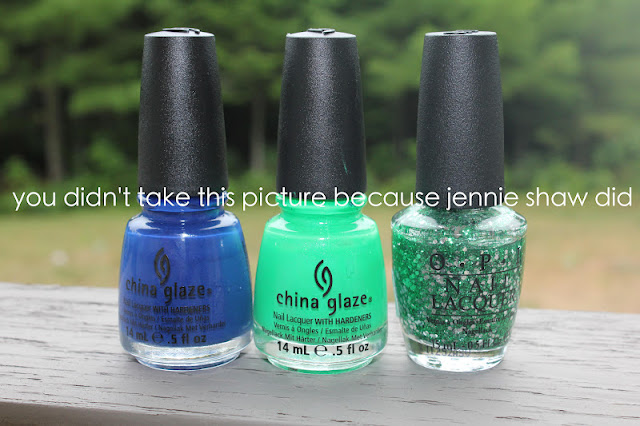 Not only is this blue THE GREATEST BLUE POLISH OF ALL TIME, it's also called Man Hunt!

The other two are In the Limelight and Fresh Frog of Bel Air (OPI Muppet's Collection). 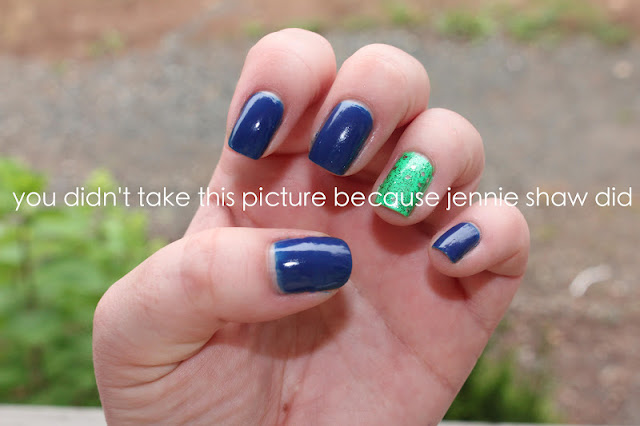 Two coats of Man Hunt, two of In the Limelight for the feature finger and then one coat of Fresh Frog of Bel Air on top of the green.

So...I'm legit buying multiple bottles of Man Hunt it's gone, in the off-chance that it doesn't make it into China Glaze's permanent collection. Even though it CLEARLY belongs there...because it's THE GREATEST BLUE POLISH OF ALL TIME. Do you hear that, China Glaze?