For the past five years, or so, we've had a couple of geese living in our front yard. And for the entire time we've had them, they've been docile and fairly-low maintenance. When we moved from Ontario to New Brunswick, we made sure to make arrangements so they could come with us because we love them and they're really cool.

So, it pains me to admit this, but it looks like our formerly faithful geese have turned on us.

Maybe they had enough of the high winds, or maybe they grew tired of having to be in the same place all the time but last week, the geese snapped and attacked someone on our property.

I know what you're thinking, once an animal attacks a person, it's a sign that the animal should probably be put down. And trust me, that's exactly what we would do but this situation is slightly different.

Mostly because the geese are made of wrought iron. 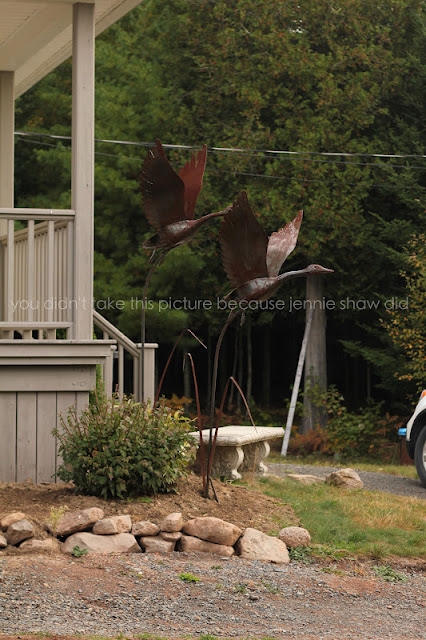 The geese in question.

Now, I won't publicly call out the person who got attacked by our immobile iron geese, but I will say that it wasn't The Remix (or me). However, it was a person who has spent quite a bit of time at our house lately.

The first time (yes, the first time) the geese attacked, they left a small cut above the person's eyebrow. Now, one would think that an injury from fake geese that haven't moved in years would be enough for this person to stay clear, but that didn't happen. In fact, the second time the geese attacked - on a separate day, no less - they took a quarter-sized chunk out of the person's forehead.

So, naturally, there was only one thing that I could do to prevent such an accident from happening again: 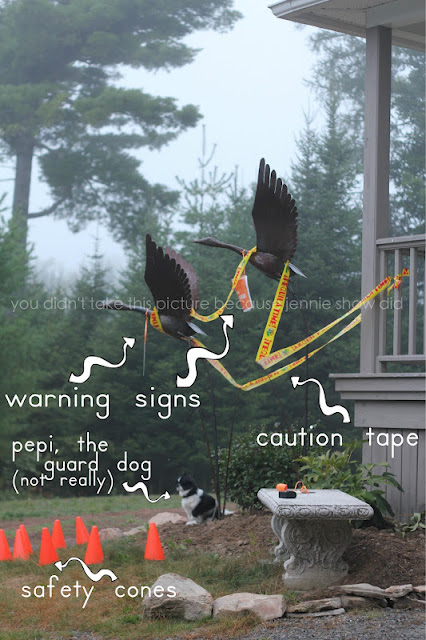 To be fair, it was really the front goose that was doing the attacking, although the other goose didn't do much to stop it. 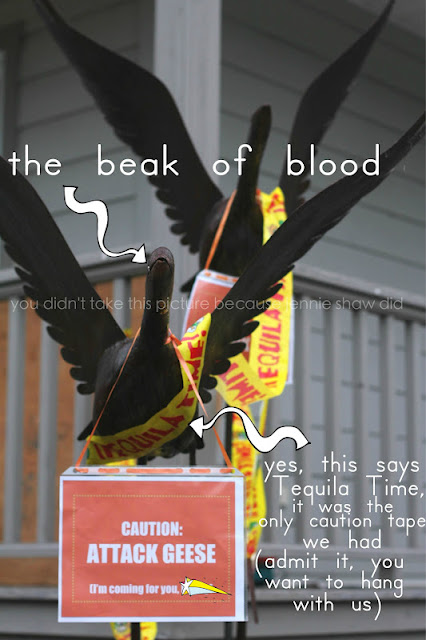 Name has been blocked out to protect the identity of the attackee.

I'm happy to report that a week after instituting the extreme safety measures, there hasn't been a single (additional) goose-related injury. In fact, it's gone so well that I'm even thinking about making a sign that reads:

7 days since a goose-related injury.

Because that's something to brag about, right?

Note: When they saw the extreme safety measures, the attackee laughed so hard that their face hurt, which was good because it distracted them from the pain of the goose-related injuries. Also, they asked me to send a picture to them so they could show their family. Because how do you really explain what happened without a picture?