Last Thursday, I had a bad day.

First, some loser doctor pushed every button I have regarding the field of medicine while simultaneously making me feel extremely shitty about myself. After spending approximately twenty minutes being berated by this doctor, and then crying for equally as long in the parking lot, it was time for a new day. Too bad it was only 10:00. With little choice but to wipe my face and suck it up, I headed to Costco to pick up my latest collection of medication.

On the way there, I started thinking about how much better I was going to feel once I got inside. Call me a loon if you want, but I love me some Costco. Not only do they have super-sized vats of Hidden Valley Ranch and the cheapest bananas in town, but they also have the best random stuff.

For instance, a few weeks ago, I bought a giant Mr. Potato Head. It was $21.99 and stands at just over a foot tall: 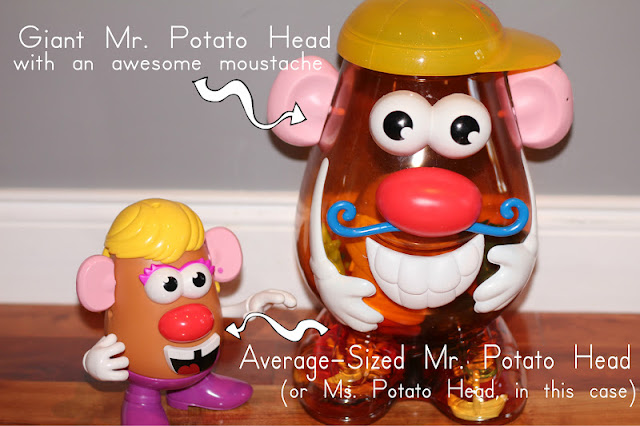 It's super cool because inside the giant Mr. Potato Head are two average-sized Potato Heads. Awesome.
A few minutes later, I was at the front entrance, passing my membership card to the greeter. In return, she handed me a flyer with the week’s special deal, while I tried to control the vomit that was creeping up my throat.
Why?

Not only has this singer been convicted of battery, but their supposed “rehabilitation” has been lip service, at best. To add fuel to the fire, he recently tattooed the image of a beaten woman on his neck. Of course, he claims that it has no connection to his past, but let's be real - if nothing else, his choice of tattoo confirms that he has little to no remorse for his actions.

There are a lot of people out there who remain loyal to this artist, and adamantly support his right to say what he pleases, no matter how offensive. And, frankly, I agree with them. After all, we live in a free country. But if they get to choose, so do I.

Long before the recent tattoo, I made the conscious decision to stop supporting this artist by not buying or listening to his music, or watching other mediums where he appears (including the MTV Music Awards). Again, this is my choice. A deliberate choice that I’m entitled to make.

So seeing this singer at a place where I love (while feeling particularly emotional) made my stomach turn because I knew that if he was appearing in their promotional material, then some of my money was going into his pocket.

When I got home, I wrote Costco an email about how disappointed I was with their decision to use such a polarizing individual when there were so many other available options. And then I wept into three throw pillows started to think about how much I was going to miss shopping at Costco. It just opened a year ago, here, and I’ve grown accustomed to bulk English Muffins and 50-pack rolls of toilet paper (that The Remix loves to stack in a giant pyramid) but all that was over because they decided to hire a singer with a confirmed history of violence against women to help sell televisions.

But then, something extraordinary happened.

The next day, around noon, I got an email back from Costco.

I thought it was a brush-off at first, as it was addressed to “Dear Valued Member,” but then, in two simple sentences, the rest of the email stated that they appreciated I brought the matter to their attention and the video would no longer be played.

I write a company an email telling them how I feel and they listen?

And then they do something to make it better?

To know that a company truly cares about my concerns – and is willing to put their money where their mouth is (so-to-speak) makes me feel embarrassingly good. I've had some great customer service before but this went above and beyond anything I've experienced. And the fact that the email came in such a blasé form shows that it wasn't even that big of a deal for them to do. Amazing.

So bravo, Costco. Thanks for being awesome.

You've got a member for life.