I'm No Jane Austen: How To Become An Accomplished Lady

So, here’s the deal—the low-down, if you will.

Almost everyone I know has a favourite time period. A time they would have wanted to live in, if they had the choice.

For me, it’s a toss-up between the 1920s and late-1800s. Both are pretty much fashion-based choices, as I love the flapper style and would gladly be draped in pearls while wearing cloche hats, but the 19th century...Man, they really knew how to dress.

Yes, corsets would take some getting used to but the ones in the late-1800s didn’t make you as boobilicious as earlier versions. Also, women with curves were celebrated, as were women with pale skin. I nail both of these naturally, and LOVE to dress up with fun hats and dresses made from silky, layered fabric so although my rights as a person would be non-existent, I think that the 19th century is where I would want to live…in an upper-class household, obviously. I mean, if I’m traveling back in time, I don’t want to be stuck milking cows—I want to spend all day getting ready for a ball!

What does this have to do with anything? WELL, dear readers, I’ll tell you. I have recently discovered the most marvelous book. MARVELOUS! It’s called The Jane Austen Handbook: Proper Life Skills from Regency England and it is my latest obsession. I found it online and it finally arrived on Monday. As I read the intro, I couldn’t wait to read the whole thing as the author, Ms. Sullivan, not only has the wit that I love in a lady-friend but she's also incredibly eloquent (obviously, she's written The Jane Austen Handbook, for Pete's sake).

But here’s the bad news: I didn’t get very far before I realized that I wouldn’t cut it as a lady.

(if for no other reason, than because I used the word boobilicious earlier)

The more I read, the more I realized that aside from the fashion choices (which are outlined in GREAT detail), I may have misjudged the romance of the era as I would most definitely have ended up a spinster and, if I was lucky, a governess (the best career choice for a single lady and she doesn’t have to deal with babies, like a nursemaid).

That said, I’m having a freaking ball (ha) going through it and have decided to do a little series called:

Let’s start with the basics, shall we?

(Note: I’m not sharing EVERYTHING in The Handbook because that would take forever and be seriously mean to the author. I think that once you have a taste, though, you’ll want your own copy.)

How To Become An Accomplished Lady, according to The Jane Austen Handbook:

Well-bred young ladies must acquire a store of accomplishments that are of no practical use and are, therefore, quite attractive to gentlemen. However, one certainly is not born with the ability to play concertos upon the pianoforte, translate Italian love songs, paint tables, cover screens, net purses, and perform all of the other talents of the accomplished lady. These skills are acquired through an intensive training process that begins in childhood and continues until the triumphant day of marriage, whereupon one can rest comfortably on one’s laurels.

(I know right, doomed before you even start. Haha!)

During school, I took French until grade 11. I also did an exchange in France when I was 15, and went back to tour around for the summer of 2005, so I thought that I was off to a good start with this one. However, in the fine print below this point, it says that you need to become well-versed enough to translate love songs and there’s no freaking way I’d be able to do that. Accurately, that is.

2. Acquire a basic grasp of geography and history.

YES! This one, I’ve totally got. True, in grade school, I failed the map of Canada (yes, really) but managed to get 100% on my map of Europe True story. And since that's where England is, I'm golden). And history? Yeah, I'm pretty okay with that too--and it does say that you only need a basic grasp of both, so I'm good.

The options listed of acceptable instruments are the pianoforte or the harp. Now, I’ve always wanted to play the harp—it seems mystical and if I was having a hard time imagining a new scene for my latest manuscript, I could play that “hey, I’m having an awesome idea” number that’s in all of the movies and then get on with my day. (Note to self: get harp).

I do play the piano, though, which is basically the same thing as a pianoforte. True, I only know the first half of a bunch of songs because that’s when I get bored (sorry Mum) but I do love to play.

4. Draw or paint the picturesque. 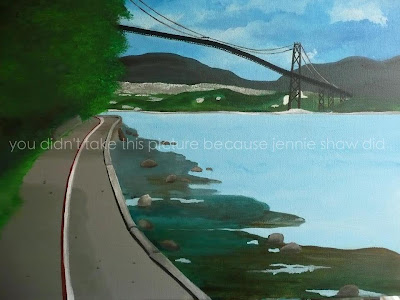 A picture I painted for my baby bro. Note the curve of the bridge that, if totally accurate, would most definitely be a severe safety hazard.

5. Master the art of needlework.

Not only do I love making my own Halloween costumes, sometimes I even like making other people’s! Plus, I’ve made a slip cover for a futon, curtains, blinds, and even a few cushions. No, they’re not seamlessly perfect (ha) but they’re functional and that’s what matters. I’ve even done some cross-stitching in my day, which The Handbook says I needs to display to impress company. Done and done. 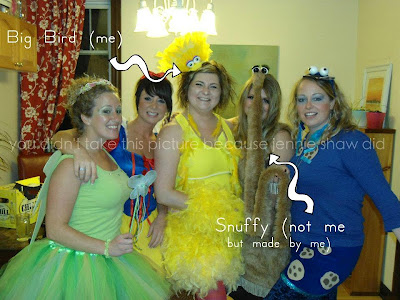 If you’ve ever gone dancing with me (or spent any time with me), you know that I'm not particularly graceful, especially when it comes to dancing. That's not to say that I don't like dancing, because I do, but after a few drinks, I tend to fall into the trap of singing along very loudly and then acting out the words—sort of like a bar’s version of an interpretive dance. And by the end of the night, I look like this:

So there you have it, out of a possible six points, I got three and a half, which works out to 58%. I guess that makes me a 58% accomplished lady. Not bad, but certainly nothing to brag about.

Guess I better brush up on my French and start searching Kijiji for a harp...

What was your score? Are you an accomplished lady according to The Jane Austen Handbook?

Email ThisBlogThis!Share to TwitterShare to FacebookShare to Pinterest
Labels: I'm No Jane Austen