The Nail Files: Santa Penguins Wandering in a Forest Of Awesome

Whoa, it's Friday ALREADY! Where is the time going?

We don't even have a Christmas tree yet!

With the plethora of Pinspirational Christmas manis out there, I realized that there just isn't enough time to try them out individually. So, I've decided to spend the next 10 days combining their awesomeness! Yay!! 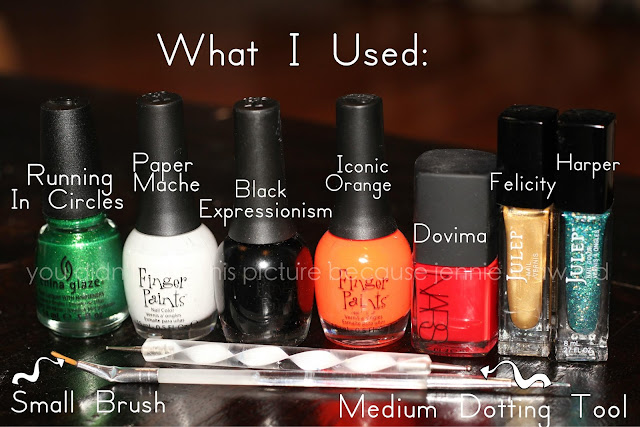 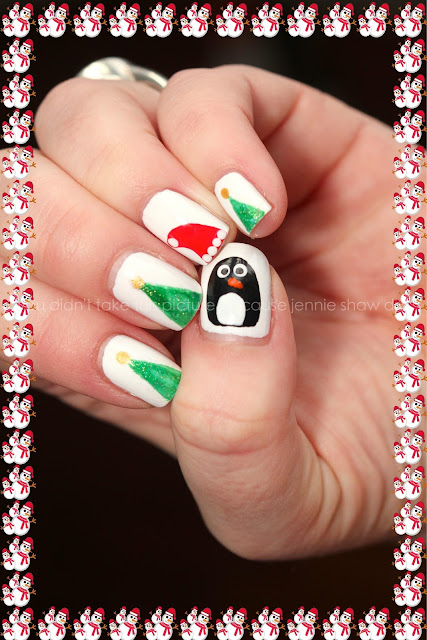 Each nail got two coats of Paper Mâché to start.

Trees: With the small brush, I painted a narrow triangle with Running In Circles. Truth be told, I started with narrow nail tape but the lines weren't clean so I ended up going over them with the brush anyway (stupid Pinterest making it look so easy, haha!). After one coat of Running in Circles, I followed it up with one coat of Harper and then did a dot of Felicity at the top with the medium dotting tool.

Santa Hat: After figuring out which way the hat should curve, (which took an embarrassingly long time because it had to be done upside-down) I swooped it on, using the brush that came with Dovima because it was narrow enough. Then, I did a medium dot with Paper Mâché at the tip of the hat and four small dots at the bottom.

WARNING: I let the penguins dry overnight to prevent smudging but the penguin on my right thumb still smudged! The left one didn't, though, which is not only totally bizarre but also VERY FRUSTRATING as they each took multiple attempts to get done. Seriously, how did one smudge but the other didn't? How was it not dry after EIGHT HOURS?
(Obviously, I only included a pic of the non-smudged hand.)

That said, I think the combo of the penguin and santa hat are adorable, and well worth the effort.

If I had to rate the three designs in terms of ease, the trees are by far the easiest, followed by the santa hat and the penguins.