Oh man, the anticipation is CRAZY!

So, in order to pass the time, I spent a long time on my mani this week after pinning my little face off. Side note: WHAT DID I DO BEFORE PINTEREST? 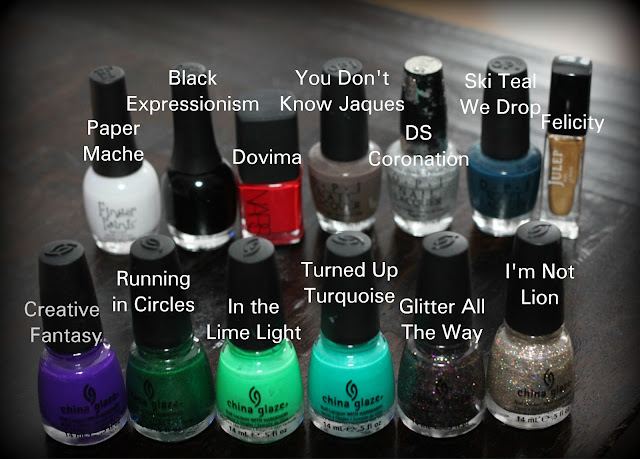 Err...I also used It's A Trap-eze but forgot to take a picture of it. Can you blame me, though? I used so many! Also, I've just noticed that I misspelt You Don't Know Jacques. *headdesk*

And here's what I did with all of them! 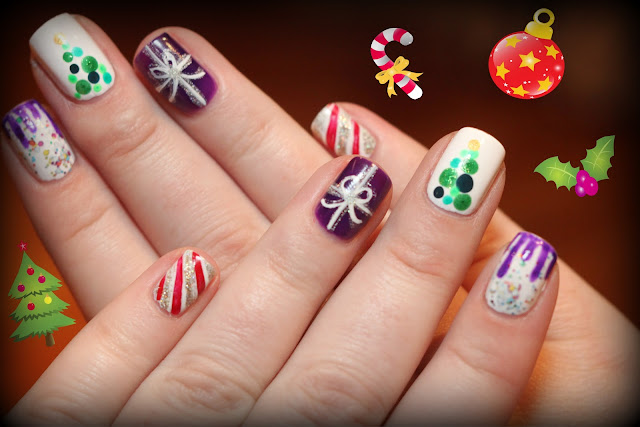 Candy Cane Pinkys: One coat of Paper Mâché, followed by stripes of Dovima and I'm Not Lion.

Ring Finger Presents: Three coats of Creative Fantasy, DS Coronation cross and bows with a thin line of Paper Mâché overtop so the sparkles are more in the background.

Middle Finger Trees: Two coats of Paper Mâché, then random sized dots of Turned Up Turquoise, In The Lime Light, Ski Teal We Drop, and Running in Circles. And for the top, a dot of Felicity.

Pointer Finger Icicles: One coat of Paper Mâché, one coat of It's A Trap-eze, two coats of Creative Fantasy, gooped on with a small brush to make it look like the polish was literally melting off.

And for the grande finale: 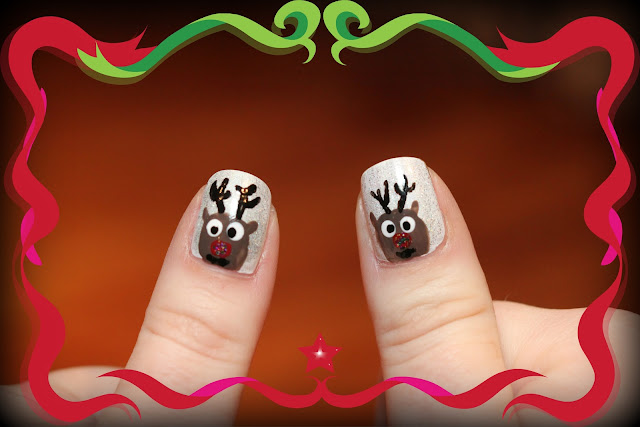 One coat of Paper Mâché, one coat of DS Coronation, I'm Not Jacques for the head and ears, Dovima and Glitter All The Way for the nose, and Black Expressionism for the mouth, pupils and antlers. Originally, they didn't have mouths but I thought they looked weird. That said, I'm not too happy with how they look but since it was an afterthought and they were already done and I wasn't about to re-do them.

Have a wonderful holiday week, everyone!!

ps. Turns out that when I changed the primary email address of my blog, I became a noreply commenter! Oh, the HORROR! I believe that I've rectified the situation so my sincerest of apologies for the last month-or-so of comments I've left on other's blogs.