It's been pretty quiet on my blog this month, and that's because there's been a lot going on behind the scenes (if my life were a broadway play, that is. Haha!) Improper metaphor aside, there's been quite the development in my health. No, I haven't been miraculously cured but the end may be near, my friends!

In mid-October, I got a wonderful email from my nurse with news of a drug study for a medication that has the potential to fundamentally change my life. It's name is Mepolizumab and it's being developed by a pharmaceutical company called GlaxoSmithKline. To make a very complicated medical story short, it's a synthetic version of an antibody that will stop the hyper-reproduction of my eosinophilial cells. Making it even simpler: it's a medication that could virtually eliminate my sickness! Err...with monthly injections for the rest of my life, that is.

Last week, I was on a psuedo-secret trip to Hamilton, Ontario, where I was poked and prodded in a similar way to an alien abduction. I kid, I kid, there weren't any actual probes. However, I went through a series of tests that, in the end, got me into the study! So for the next six months, I'm going to be a human Guinea Pig!

Sometime in January, my number (all participants are assigned a number for anonymity) will be entered into a computer (along with the other numbers) that will divide us into two groups. One group gets the drug while the other gets a placebo supplement (there needs to be a placebo group for comparison purposes). Then, each month, I'll receive an injection either with the drug or with the placebo. I know that it sounds like there's a 50/50 chance that I'm not going to get the drug, and you're right, but the REALLY GOOD NEWS is that even if I am in the placebo group, I'll get access to the REAL medication once the six month study is over!!

Repeat: EVEN IF I'M IN THE PLACEBO GROUP FOR THE STUDY, I'LL GET THE MEDICATION IN SIX MONTHS!!!

Of course, there are a few catches: I can't get pregnant (ha) and I have to complete twice-daily breathing tests and enter the results into a Palm Pilot with a wireless internet connection. Yes, a Palm Pilot (circa 1995). 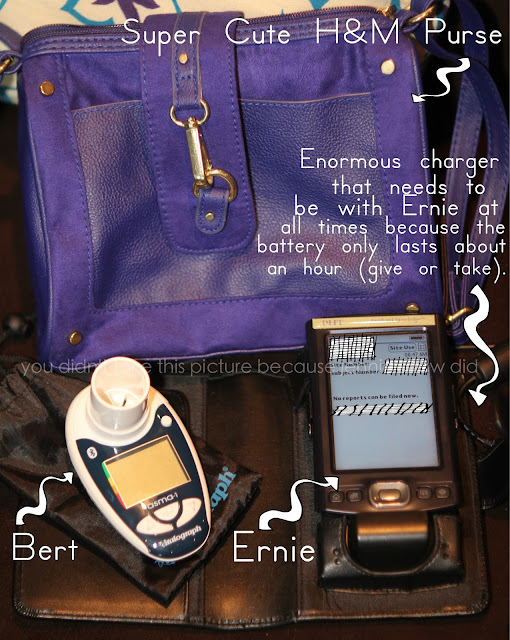 Here's my bluetooth peak flow meter and the Palm Pilot, which I affectionately call Ernie and Bert. And since they always need to be with me, I bought them a super cute purse from H&M because that's just how I roll.

Yes, there is no guarantee that the medication will work for me but this is pretty much the best thing that's happened since getting sick. The mere thought that I can get off of these stupid steroids is almost too glorious to imagine. Since I was 25 (I'll be 31 next week), my life has pretty much been stuck in pause and if this medication can give me back some of the life choices that have been stolen, it's well worth the hoops I have to jump through.

For instance, I've had to switch from the Medrol back to the Prednisone and it is making me FREAK the EFF OUT. I want to eat all of the food I have in my house, and everything I see on TV...and the internet, especially Pinterest (oh yeah, Pinterest is the worst), and I'm so anxious that I can't seem to sit still but again, it's totally worth it. If I end up in the group that gets the drug during the study, I'll start weening off of the steroids as soon as February! And again, if not, I'll be weening sometime in the summer. Either way, THIS IS FANTASTIC NEWS!!

And in the meantime, I've decided to blog about my experiences as a human Guinea Pig. It's time to be honest--really honest--with what's going on. I like to put on a brave face and pretend that everything's okay because if I don't "act" sick then I sometimes forget that I am. Granted, I never really forget but it's better than everyone constantly asking how I am. Because that's what you do with sick people: you ask them how they are. That and I don't want to be thought of as a whiner because I'm well aware that there are others who are far sicker than I am. I know that my friends and family care deeply about me but, frankly, when I can muster the energy to be social, there are about one million other things I'd rather talk about. Like, Teen Mom 2, for instance. Yes, I could talk about Teen Mom 2 for quite some time. However, being included in this study is a SERIOUSLY big deal as there are just over a hundred participants in 27 countries so it's time to step out of my comfort zone and let people into my personal bubble.


Since my diagnosis, I've kept my fears to myself and, in the interest of being honest, I'm tired of doing it. Tired of trying to pretend that I'm okay; tired of feeling like I have no control over my life; tired of having to accept that I'll be sick forever. And my newest fear is that I'll be the one freak who doesn't respond to this new medication. You know that saying: "You're the rule, not the exception," from the movie He's Just Not That Into You? Well, let's just say that my medical experiences have shown that I AM the exception. So yeah, the next few months are going to test my ability to manage my expectations.


I'm scared shitless kind of worried about revealing my vulnerabilities, as I pride myself on being a strong woman, but being honest about my situation will hopefully open up a way for others to connect with me (instead of just blowing up in my face). My hope is that my honesty will open a door of communication without having to repeat myself a thousand times, so that's what The Guinea Pig Diaries is about: sharing my experiences--both physical and emotional--with whoever wants to read them.

And for those who follow me on Twitter (which you should because I'm awesome) THIS is the news I was cryptically referring to! Sorry to those who weren't in "the know" about the study but I didn't want to talk about it until it was confirmed. Not getting into the study would have been devastating enough without having to un-tell people. Thank you for your understanding.


So until next time, I leave you with the tune that will hopefully be my theme song for 2013 (which, by the way, was the first song I heard when I landed back in Fredericton. Fitting, no?)