The Nail Files: Everybody's Dotting Around (Or Maybe It's Just Me?) 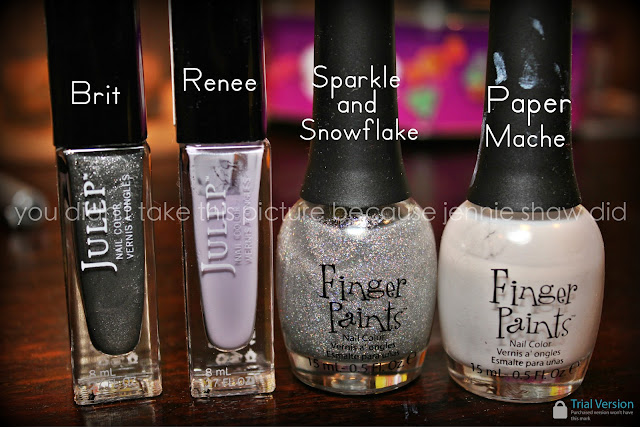 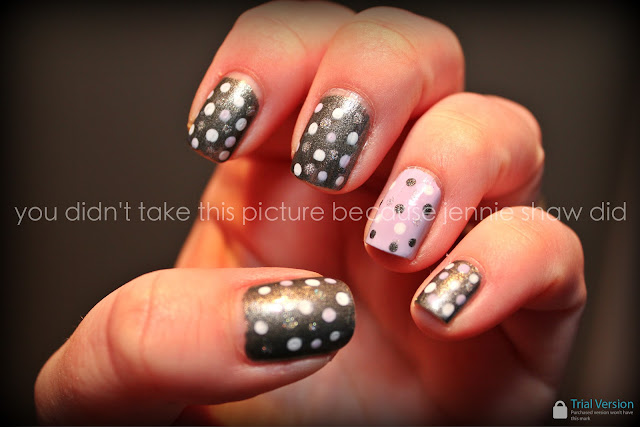 Two coats of Brit and Renee, respectively. Then, with a medium dotting tool, I did dots of Paper Mache, Sparkle and Snowflake and, depending on the base colour, Brit and Renee. You can't really tell in this picture, but on the nails with Brit as a base coat, half of the lighter dots are actually Renee.

Here's the deal: I got Brit and Renee in a surprise clutch from Julep. At first, I was a serious sad sack because I didn't like the third polish AT ALL and Brit's one of those matte finish polishes (which I do not like). But, when I relized that it would turn into a normal, shiny polish with a top coat, I became a half-sad sack and decided to give it a go.

The Good News: I quite like Brit and, really, Renee looks an awful lot like Don't You Lilac It?, which is one of my OPI staples.

The Bad News: BOTH of these bottle had wonky brushes. What the frickity-frack is with Julep and all of their wonky brushes! I don't think that I've EVER had a wonky brush before and all but two of the polishes I've ever gotten from Julep have needed trimming. It's bizarre. And frustrating.

The Better News: I've been seriously freaking out because my OPI DS Coronation has been running very low and I haven't been able to find it anywhere. When I went into Sally to get some purple hair dye, I noticed that all of the Christmas polishes were on sale and that Sparkle and Snowflake looked almost identical to DS Coronation. When I brought it home, I did two swatches and discovered that it's even SHINIER and SPARKLIER than DS Coronation! And it was only $2.50! SCOOOOOOOOOOORE!!! Haha!!