An Anonymous (Almost) Apology From A (Minor) Canadian Celebrity

A couple of years ago, I wrote a post about my experience with Shawn Desman. (Click here if you'd like to read the whole thing. I also sum it up below, though, so no pressure.)

The Recap: I "met" him in 2002-ish when I was a member of my university's Student Union and he came to my school for a concert (a volunteer position that nobody wanted and I got stuck with). I thought that all I had to do was greet him and show him around but instead, I was given an insane list of demands that I had less than 24-hours to put together. I spent time that I should have been working on my papers to run around town and purchase his many ridiculous and expensive items. After I got everything that he wanted AND set up his dressing room, he arrived. Late. With a serious entourage. He refused to look at or speak with me, charged a seriously expensive dinner to our school after deciding that his plethora of items weren't satisfactory, and then sang exactly TWO songs before leaving and taking the entire contents of the dressing room with him.


In short, he was King of the Asshats. 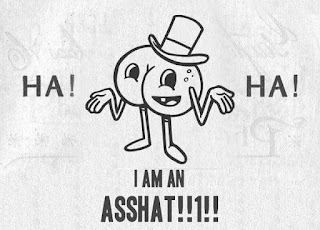 Now, I'll admit that my post about the experience was somewhat scathing (although entirely accurate) but it's bizarre how someone who makes their living off of other people's money (ie. fans buy his music/go to his concerts) believes that they can be rude to those around them. I mean, if nothing else, I'm a potential source of income. In comparison, Justin Bieber and Lady Gaga buy pizza for their fans who wait in line to buy concert tickets! And although he didn't sell many tickets to our show, there were two a handful people there and performing two songs before abruptly leaving was a really shitty thing to do.

Anyway, I kind of forgot about the post until I recently went through my SPAM comments, found one on his post and, after reading it, came to the conclusion Shawn Desman may have tried to apologize to me, albeit anonymously.

Let's take a look, shall we?

For organizational purposes, I'll examine each sentence, one by one.

1. He's nothing like that now, he used to be a little snotty but now he's really nice to his fans and people in general.

By starting with nothing like that now, Shawn is admitting that he was, in fact, an asshat. I appreciate the acknowledgement that he was snotty-mc-snotterson, but the use of a little minimizes his degree of rudeness. And because I haven't had any interaction with him since the time he ruined my life came to my school, I can't know for sure if he's changed but since he (a) took the time to comment on my blog (albeit anonymously) and (b) shaved that ridiculous side faux-hawk, I'm willing to give him the benefit of the doubt.

2. I would know this because I now him and I spent most of this past summer hanging out with him along with some other people.

It was at this part of the anonymous apology where I became 50% sure that Shawn was the one who commented because surely, someone who nows him well enough to spend their summer with him would be far more excited about it, right? If they were a fan then wouldn't they be like: I know this because I spent most of this past summer hanging out with him and it was the BEST TIME OF MY LIFE....or something to that effect, anyway.

But no, this is just super vague and leads me to the far-fetched natural conclusion that only Shawn could have written it, trying to be slick about keeping his identity a secret by not including any real details that could be traced back only to himself. Nicely done, Shawn, but I'm onto you.

Side note: Do you think the other people he's referring to are part of the fan group, or people in general? (ps. That joke's not going to get old for a while. You've been warned.)

3. You're all judging him on what you just read, you have to meet him for yourself before you judge him cause he's honestly amazing.

Hmmm....well, I did meet him myself and the post was about my experience with him so I'm gonna stand by my judgements. In regards to the other comments, how else were they supposed to react? The post outlines some pretty horrendous behaviour by someone who should know better.

So there you have it: my dissection of an anonymous (almost) apology from a (minor) Canadian celebrity. Sure, there's a chance that Shawn Desman didn't write this comment but maybe, just maybe, he did. Are you telling me that you've never gotten a little tipsy and trolled Facebook, making a few comments or friend requests you regretted in the morning? One could argue that Google is a celebrity's Facebook so maybe Shawn went on a bender on September 8th of last year, found my blog, and felt the need to make amends.

Well Shawn, as much as I appreciate your pseudo-apology, if you really want to say sorry for being such a rude dude when we met, please shoot me an email because even though I may like some of your new songs, there's no freaking way I'll spend one single penny to buy one as that would mean that I support your behaviour and I don't support asshats. However, I do believe in redemption so if you really do regret how you behaved, I'm more than prepared to forgive you.

ps. Please remember that if you decide to comment on my blog anonymously, and I can find something funny about it, you'll probably be razzed. I mean, if you're going to hide behind a sheet of anonymity, you're pretty much asking for it. You've been warned.

Email ThisBlogThis!Share to TwitterShare to FacebookShare to Pinterest
Labels: Anecdotes, Beefs, Letters to Nobody, Razzing