I love the re-telling of fairy tales. Okay, to be fair, I haven’t actually read any but I really loved Ever After, so there’s that. When my virtual book club picked Cinder as January’s book, I was all over it, and not just because I had to be. 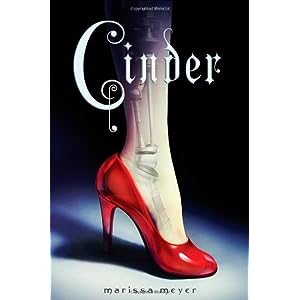 Cinder is a re-telling of Cinderella where Cinderella is a cyborg who works as a mechanic, in futuristic China, where everyone lives in fear of a plague that can kill you in under a week.

I'll give you a moment to let that sink in...


I readily admit that it seems like a stretch, and I’m not denying that there are times it strains to connect to the fairy tale storyline but that really doesn’t matter. Why? Because this book is freaking awesome. It’s the kind of book that makes me feel awe and admiration for the author because there’s no way, in one million, KATRILLION years, I’d be able to string it all together.

The first thirty-or-so pages were hard to get into because there was a lot of world-building going on but after that, I was hooked. There’s SO MUCH going on that at times I wanted to scream: WHAT THE FRICKITY-FRACK IS HAPPENING? but then I’d get a smidgen more information and be okay with not knowing everything. That’s a fine line to walk, my friends, and Ms. Meyer navigates it like a Navy pilot (wait, are there pilots in the Navy? Whatever, you know what I mean). Yes, there are some loose ends but since it’s part of a series, that’s okay.

So if the strange interpretation of Cinderella isn't enough to make you want to read Cinder then here are a few more reasons:

1. Cinder is a kick-ass heroine.

2. It doesn’t stick to the entire Cinderella storyline, so there are lots of twists/turns/surprises.

3. There’s an adorable robot who is akin to Dobby from Harry Potter.

4. The evil queen character is Eh-VEL. And sneaky. And somewhat insane.


5. There are people who live on the Moon!

I gave Cinder five stars on Goodreads and can’t WAIT to dive into Scarlet, which is the second book in the series. It came out earlier this week and there was a small glitch in me trying to borrow it from my library because it’s an audiobook and I can’t figure out how to play it. Of course, it could just be my computer that Future Shop broke instead of fixing, so I'm thisclose to just buying a copy because I seriously need to know what happens next!

Ps. Has anyone ever listened to an audiobook before? Does it have the same effect as reading a regular book? I’m torn because I don’t want to ruin it for myself.