Monday of this week, aka The Time Denny's Broke My Heart (and then filled it with rage), was also the day I got my second shot in the drug study! Wohoo!

First thing in the morning, I arrived at St. Joseph's Hospital in Hamilton to meet my Rad RT, go through a barrage of tests, get my shot and then wait for an hour to make sure that I don't have an allergic reaction. You know, because it's still experimental, hence my Human Guinea Pig status.

As the purpose of The Guinea Pig Diaries is to share with you what it's like to be a Human Guinea Pig, I brought my camera with me to give you a glimpse into my world. No, there isn't a pile of wood chips or a giant wheel but, now that I think about it, someone should really get on that... 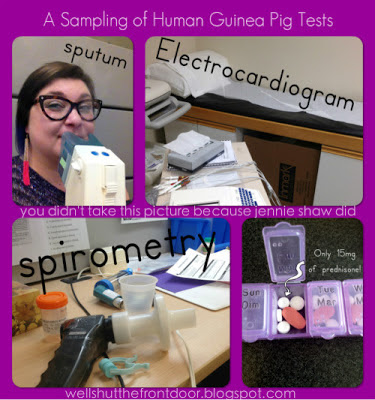 Then it was time for the actual shot: 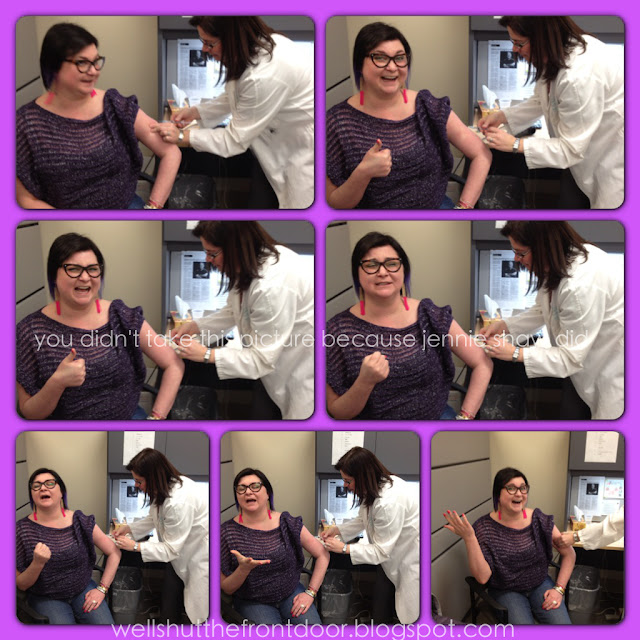 If I had to describe what the shot feels like, it'd be a combo between rattlesnake venom and lava, which explains my facial expressions.

After the shot, I dropped from 20mg of prednisone to 15mg. THIS IS A BIG DEAL, PEOPLE, as that's a looooooow dose of steroids for me. So, naturally, I spent the rest of Monday, all of Tuesday and all of Wednesday doing constant health checks on myself because a dose like that would leave me feeling shitty within a couple of days.

My internal monologue went a little something like this:

Monday, 1:35pm - Do I feel okay? I think that I feel okay. But what does okay mean? Would I feel a difference already? I just took my prednisone so maybe I should pump the breaks on this self-monitoring thing. But what if I do feel okay but I don't know that I feel okay because it's been so long since I've felt okay? This is just ridiculous. Shut up, Jennie, and eat your burger.

Monday, 5:50pm - I think that I still feel okay. A little tired but at least I have both seats on the plane to myself. Yes, I definitely feel okay. I totally got the real drug.

Tuesday, 2:37pm - That nap was awesome and I feel AMAZING! I totally got the drug. This is the best day ever.

Tuesday, 9:30pm - I feel okay. Not amazing, but okay. I'm pretty sure that my breathing is okay. This is about the time that I'd start to feel shitty and I don't think that I feel shitty. Just okay, but that's better than shitty so that means that I must have gotten the real drug! But I won't really know until tomorrow so maybe I should stay up as late as possible because tomorrow morning could be disappointing if I'm feeling shitty but staying up late will probably make me feel shitty so that's a bad plan. Okay, time for bed as I'm confusing myself.

Wednesday, 7:30am - I'm ALIVE! Two days later and I feel the same as I did on Monday! I TOTALLY GOT THE DRUG! Where's my glitter cannon? Break out the mimosas! Why is there no band playing? I'm SO going to start running again. Okay, maybe not because I hate running but just knowing that I could start running is pretty cool. Holy crap-bags, I'm totally going to get better. The end is near! But seriously, why isn't there a mimosa in my hand?

So, as you can see, it's been a jam-packed week. Haha! And now it's Thursday and I feel good! A new crop of fears have crept into the back of my brain since it's looking like I'm actually on the way to getting better, but I'm trying my hardest not to think about them (sounds strange, I know, and I'll be discussing them at a later date) because for now, I want to hang out in the bubble of happiness that is The Weening Of My Prednisone--something that I never thought would actually happen.