Hey Guys and Gals! It's Monday! BOO! But to make your Monday better, I have a special treat for you: A guest post by my newest favourite author (and Twitter pal), Elisa Lorello! I've read three of her novels, Faking It, Ordinary World, and Adulation, and think that she's pretty much the bomb so I'm super psyched to have her here today (virtually, anyway, she's not in my basement or anything creepy like that). 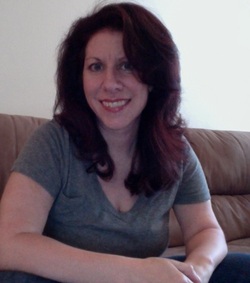 First up: Thanks, Jennie, for allowing me to be a guest on your blog. I’m also very grateful for your kind (and entertaining) reviews of my novels.

So allow me to fill in some details of how I came to write this post.

How Jennie and I met: via #chicklitchat on Twitter.

What is Chick Lit Chat, you ask? A fun hour on Thursday evenings (8p.m. EST) for readers and writers to get together and discuss all things chick lit—favorite characters, stories, writing advice, you name it. Occasionally the conversation gets derailed to Colin Firth. No one seems to mind.

How Jennie and I bonded: Mostly through tweets about glitter.

We also have other things in common, like writing commercial women’s fiction, living in the north (although I’m currently residing in New England, and I don’t say “wicked” or “eh”), and wishing for winter to finally be over. (Yeah, I know technically it is. I want the temperatures to match.) In short, she’s someone I would share my pop tarts with. (No, that’s not a euphemism.)

Jennie’s idea, and it’s a great one. Really made me think, too. I mean, I can rattle off a number of fictional characters for whom I’m jonesin’—Sam Seaborn, Neil Caffrey, and Patrick Jane, to name a few—but you’ll notice they’re all characters from television, not books. So I went to my bookshelf, and as I perused the spines, my eyes fell on one, and it all came back to me.

Let me say for the record that I fell in love with Mark Darcy long before I saw the film adaptation of Bridget Jones’s Diary. (Meaning I read the book first.) And while I concede that he was well cast, Mark Darcy and Colin Firth are two separate crushes. Let me also say that had I read BJD during my twenties, I likely would’ve been Team Daniel. But that’s the price to pay for being stupid when you’re twenty-something. (In my teens, I’m sorry to say, it probably would’ve been Tom.) Fortunately I read BJD at the perfect time in my life (mid-late 30s…I know, what took me so long?) and thus fell in love with the perfect man. (Well, almost perfect. He does have that slight flaw of being fictional.)

So what makes Mark Darcy so lovable? Let’s start with his name: Mark. Darcy. Forget the allusion to Pride and Prejudice. It just rolls off the tongue so well. It’s precise. It makes you feel like what you see is what you get. And that’s exactly Mark Darcy—he doesn’t pretend to be anyone or anything other than who or what he is. He may make apologies, but he never compromises himself. Even when caught wearing the ugliest sweater on the planet. He’s humble to the end, despite Bridget believing the contrary. We see his potential way before she does, which makes rooting for him more fun.

What also makes Mark Darcy so appealing to me is that he’s not impossibly gorgeous (not that I’ve never had a crush on impossibly gorgeous characters—hell, I’ve written them: see Devin in Faking It), but he’s attractive all the same. Awkward and attractive and intelligent and a nice guy. And at my age, I find those qualities so much more appealing than the alpha male, both in fiction and in real life.

I remember reading an excerpt of Faking It to my students, before the novel was published. Not even halfway through, one of my female students blurted, “Oh yeah. I’m in love with him.” And upon reading a scene drafted by my Why I Love Singlehood co-author, I immediately emailed her and said, “You totally made me fall in love with Kenny, dammit.” Literary crushes are fun. They’re fun to have as a reader, and they’re even more fun to create as a writer. But ultimately, what makes us long for him to be real is the connection they feel with him. And those are the best characters, crushes or not. Their humanity is so real you forget they’re not. The magic is not only that you believe in their realness, but in the hope that some form of them actually exists.

And they do. You only need to know where to look.

Thanks so much for guest posting, Elisa! What a great pick! (Mmmmm...I do love me some Mark Darcy). And if you haven't read any of Elisa's books yet, what the heck are you waiting for?