I'm out of town right now and I forgot to take a picture of the polishes I used before I left, so all you get this week is a picture of my mani!

On to the mani: 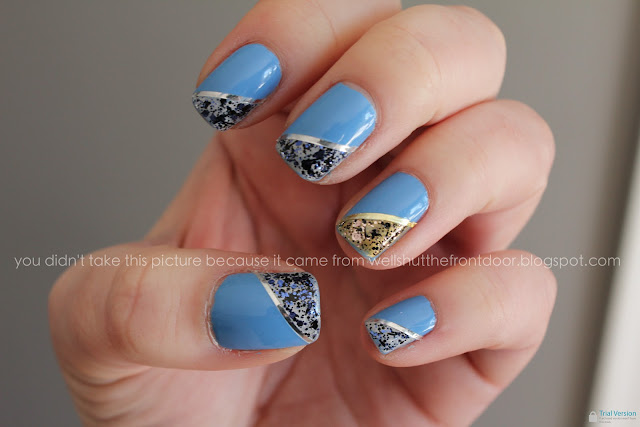 There were a few steps for this one:

3. Place striping tape on nails in a diagonal line. (If your nails aren't dry, this will end badly for you. Trust me.)

5. One coat of China Glaze Bling It On on upper part of nails and one coat of Razzle Me Dazzle Me on feature nail. (Both of these polishes are from CG's Glitz Collection, which is amazeballs.)

6. Peel off striping tape because it'll be covered in nail polish (except if you're super careful, which...err...I am not).

8. Put on silver striping tape to cover up any mishaps where the previous striping tape was. (Again, it's super important to let your nails dry or the tape won't stick well.)

9. Two coats of Julep Polymer Top Coat to seal everything.

I REALLY love the China Glaze Glitz Collection even though I didn't win the contest to get them for free (not that I'm still bitter...okay, maybe it still smarts). There's so much going on with them that it's difficult to describe but what really sets it apart from other glitters is the amount of black sparkles and bits, which makes for a very deep and sophisticated glitter polish, in my opinion (which really just means that I think everyone should get some, like, right now). Haha!!

Have a great weekend, everyone!