Throwback Thursdays: The Worst Haircut I've Ever Had I remember the day well it was one where I was feeling kinda blue. I had a hair appointment to do my standard cinnamon highlights and trim but when I got to the salon, my usual stylist wasn't in. In his place was a young guy who was fashionably dressed and somewhat flamboyant. My sixteen-year-old self fell in love with him on the spot so when he suggested that I opt for something a little more cutting edge, I was just vulnerable enough to agree.

And that's when he cut off all of my hair.

The next day at school, my friends were all: "WHY DID YOU DO THIS?!?" And as unsupportive as that sounds, it was a valid question as I'd gone from having shoulder-length hair to a GI-Jane-wannabe. It was a rough day, but then I came up with a fantastic plan to make my bad haircut better. It was simple: I'd bleach the front.

Yup, this was the nineties and the Spice Girls were all the rage and if Geri could sport red and blonde chunks then so could I! So, off to the drugstore I went, because why would I pay a professional $50+ to safely lighten my hair when I could do it myself for less than ten bucks? (My adult self does a *headdesk* to this train of thought.)

And that's when it got worse.

Because I'd dyed my hair before, the bleach didn't lift my hair to the same blonde: it was a chunky nightmare to say the least. However, my sixteen-year-old self thought that it looked awesome. I was fashion-forward and killing it...in my own mind, anyway. 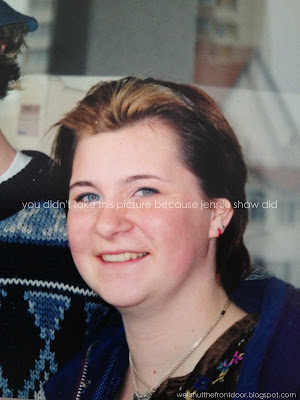 Just how many colours of blonde can you see? I can count, like, at least three. And WHY DID I BRUSH IT BACK LIKE THAT? Bad move, Jennie. Bad move.

As you can tell, I DO NOT have the facial bone structure to pull off this hairstyle. Like, at all. But, I think that every gal cuts all of her hair off once, just to see what it would look like and, really, I guess it's a good thing I did mine during a time where there was a lot of bad hair going around. And by time, I mean high school.

About a month later, I had to come up with a way to style my hair in a fancy way for a formal. You know, because everyone else would be rocking ringlets or something. Naturally, I did what any nineties teen would do and took inspiration from Gwen Stefani. A few bobby pins later, I had twisted all of the blonde hairs into little pinwheels...and then dumped mass amounts of gold and silver pixie glitter all over them.

This was the end result: 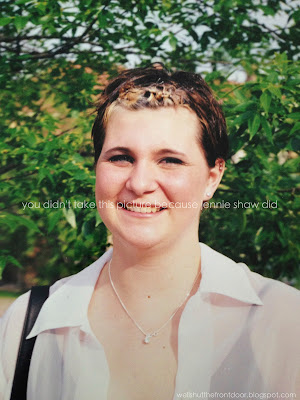 My date was thrilled with the insane amount of sparkles that ended up all over him and his suit (not really).

And can we talk about my outfit for the formal? Only in the nineties would you wear a sheer, oversized dress-shirt over a fitted black dress. *additional adult headdesk* 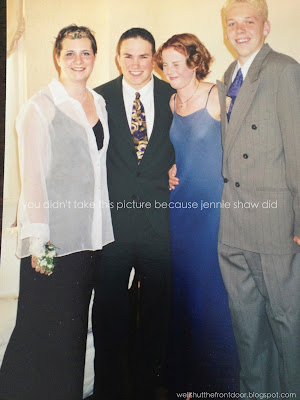 Even my pal is laughing at this ensemble. Not that I blame her as it's not a great look. And doesn't my date's tie just SCREAM nineties? Love it.

I'll admit that I've had questionable hair cuts throughout my years but this was, hands down, the worst.

Thanks to Ady, Julia, and Jennifer for hosting Throwback Thursdays! I'm loving the opportunity to go through all of my old photos and checking out everyone else's!