I'm a tad late posting this but between recovering from the madness that was the WDCE, and furiously doing revisions on my MS (inspired by the ah-mazing panels and presentations), I just haven't had the time. But now my MS has been sent to the agents who requested it (*SQUEEE*) so I can finally share why the WDCE was The Best Weekend Ever. And to be succinct, I'll break it down into four major categories.

I live in an awesome, but literary-light location. By that, I mean that I have yet to meet a fellow writer who lives near me. Without Twitter, I'd be a VERY LONELY GAL on that front. So, spending three days with other writers, who knew what I was talking about when I launched into writer-speak, was absolute heaven. Everyone I met was SUPER nice, to the point that they could have materialized from my dreams, but I'm sure that most were real (there's one I'm still not so sure about, though...haha, I kid, I kid...maybe).


Not to mention, I finally got to meet my CP in person after a year-and-a-half of regular Skype sessions! 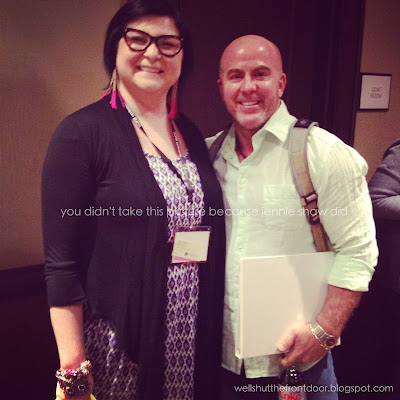 Here we are, waiting for the Pitch Slam to start.

Connecting with other wannabe published authors, and a few successful published ones, made me feel like I was part of a community and that was freaking awesome. I'm a firm believer now that EVERY writer should attend a conference, at least once, because that kind of vibe can't happen through email/Twitter/Facebook.

I stalk Twitter like a crazed person (at times). I follow agents, editors, and other writers. I read countless blog posts on craft development, ways to draft query letters, what you should and shouldn't put on your blog, tips on how to revise... Basically, I read A LOT of stuff. To the point that I wasn't sure what I'd get out of the panels and presentations, but, man-oh-man, I learned a ton.

Here are some of panels and presentations I hit:

Ask The Agent - Just like it is on Twitter, people stepped up to a microphone, in the middle of the conference room, and asked question. 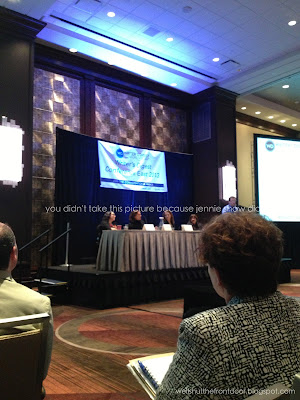 It was awesome, for the most part, listening to the crowd's questions and the agent's answers. Most of the information can be found online, but there were a few bits that were new to me. It also offered the opportunity to get to know the agents, which worked in favour of some, but not-so-much with others. This is the kind of thing that can only happen in person, and since that chance doesn't happen often, it was fantastic that I got to be there (and no, I won't be sharing those specific deets, so don't bother asking).

How To Write For Big-Time Publications - A panel that discussed strategies in getting articles published, which can supplement an author's income. 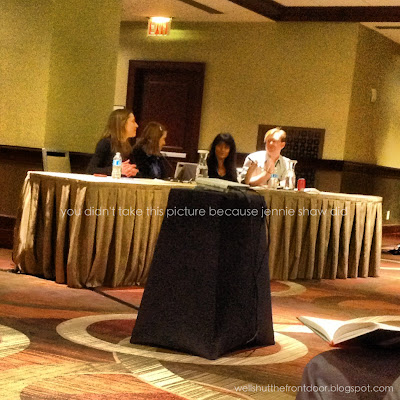 I was looking forward to this one like nobody's businesses. Since I'm not a published author yet, I'm all about finding out ways to make some money. Ha! The panel was super helpful and gave me a ton of things to think about, as well as strategies on how to get started and maintain good relationships with editors. The funniest thing is that Susan Shapiro (second from the right) wrote SPEED SHRINKING, which I read a few years ago (and loved). She was just as funny as her book, and it was a very entertaining 50 minutes.

Chuck, who is a fab public speaker, outlined what constitutes a platform, and gave about 10 fundamental guidelines that will help authors build their platforms. As stated, I'm already kind of active on a few of these fronts, but there were still a couple of really great points that I hadn't considered.


If you've ever queried an agent or editor, you know what it's like: the waiting, the sweating, the eating of copious amounts of carbs--all in hopes that your meagre 250 word summary of your 80,000+ word manuscript will make some kind of impact, which is why The Pitch Slam was so awesome. For three minutes, unrepresented authors got the chance to spend three minutes with an agent: 90 seconds to pitch followed by 90 seconds for discussion. 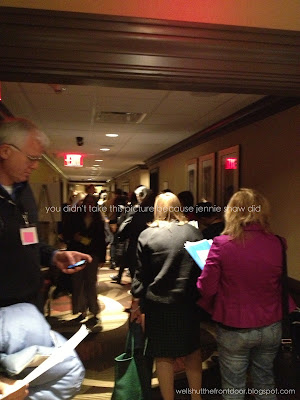 This was the line to get into the ballroom. We were in the first half of it and the huge-ness of it didn't help in keeping us calm. Haha!

It seemed like it could be compete madness, with random writers forming lines in front of the agent they wanted to speak to, but it all worked out pretty well...err...for me, anyway, as I was fortunate enough to speak with eight of the nine agents on my wish list. 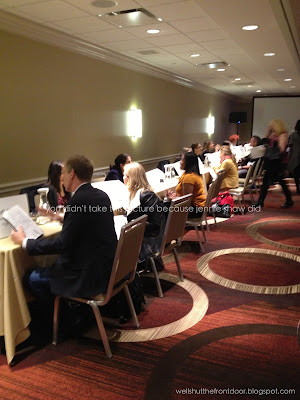 Agents were arranged alphabetically around the room and it was hilarious to hear all of the writers going through their "A,B,Cs" while trying to figure out where they were going next.

Being able to see the agents laugh, or lean forward because they were interested was an extremely rewarding experience and it gave me a serious boost in my writer self-confidence. So seriously, folks. If you're  an unrepresented author, you NEED to hit up a WD conference with a Pitch Slam.

Everyone knows that being a writer is a somewhat thankless job. Until you become published AND blow up the NYT Bestsellers's List, nobody really cares about you. Well, at the WDCE, I found that most professionals I met were all about prop distribution. From panel speakers, to agents at the Pitch Slam, the overwhelming majority gave props to the writers they encountered. As did the keynote speakers.

Tayari Jones was the closing keynote speaker and, I'll admit, she made me a bit teary-eyed with her very genuine props. 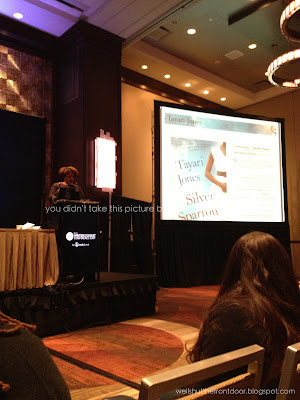 The bit that has stuck with me was: "You already have everything you need." How amazing is that? So simple and true! She also had some pretty great stories and was a wonderful speaker so you should totally buy her books. I just finished SILVER SPARROW and it was awesome.

So, to sum it up: I left the weekend feeling energized, confident, and inspired and I wish that could go to another WDCE, like, RIGHT NOW! If you've been wavering on whether or not to go to a conference, STOP wondering and just do it, people! I swear that it'll be a weekend that you won't forget.

(I was also fortunate enough to attend a bonus bootcamp, facilitated by Donald Maass, and tomorrow, I'll be posting all about that. Trust me peeps, you're totally going to want to read that one, too. It was  a mind-blowing three hours, to say the least.)