If you’re a regular reader, you know that I have a borderline obsession with Donald Maass. No, not in a stalker-y kind of way, but whenever anyone mentions that they’re a writer, I’m all: Have you read THE BREAKOUT NOVELIST? No? Well, you TOTALLY SHOULD!

So, when I learned that Mr. Maass was facilitating a Boot Camp during the Writer’s Digest Conference (East), I lost my freaking mind decided to attend. And boy-oh-boy, was it amazing. 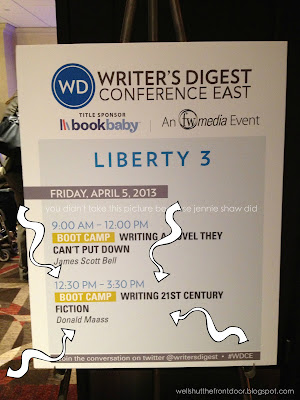 Like, seriously amazing. The most amazing-est amazeballs three hours ever.

Although I’ve read one of his books, I still took five pages of notes. Single-spaced notes. On my computer. Not in bullet form. Yeah, that’s a whole lotta information. Frankly, if I could type faster, there probably would have been more.

The thing about Donald Maass is that he has an impeccable way of phrasing things. His exercise questions are always poignant and if you do enough of them, I guarantee that you’ll have an epiphany—something that probably wouldn’t have occurred to you without his guidance. Yes, I understand that I sound like he’s paid me to write this post but rest assured, he did not.

Here are some gems he said during the bootcamp:

There’s no such thing as a finished manuscript, only a deadline. (haha)

Stories need events that are more dramatic, which portray the journey the characters go through.

And that was just part of the introduction!

We got down to business quickly after that, and the room fell quiet except for the sounds of frantic typing, scratching pens, and the occasional sigh (usually of the light-bulb moment variety, but I was sitting in the front row so I can’t be sure about all of them). 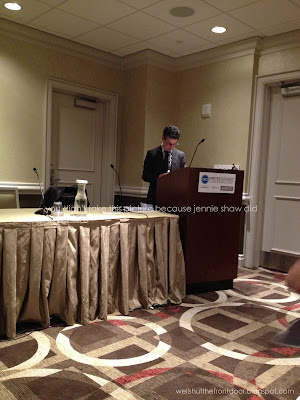 My sneaky pic.
Here are some of the questions that really got my mind a-racin’ (hopefully they can help you, too):

What has your protagonist never told anyone? All protagonists have made a shameful mistake, who would be the worst person to find out? What’s the biggest consequence in revealing to that person?

Backstories should be about shame and forgiveness. The journey to forgiveness is the dynamic stuff that’s happening even when the plot is driving the novel. Give your characters a dynamic experience so that readers can connect to them. You’ll create a character who people can relate to—the universal human condition.

There was a whole lot more than that but out of respect to Mr. Maass, I’m not going to share any more because he’d probably prefer you buy one of his books or attend a Boot Camp yourself. And you want to, after reading this post, don’t you? Yeah, I know that you do. So get to your bookstore/Amazon/library, people! GO THERE RIGHT NOW! See what resonates with you and then let your imagination soar!

Umm…why are you still here?
GO!