Throwback Thursday: I'm (Almost) Like A Bird and (Definitely) Want To Fly Away Haven't done one of these linkups in a few weeks but I'm back. Yay!

This week, I have a photo and a story from way back in 2000, when I was 19. I was home from my first year of university, working as an extra in movies and TV shows, which roughly translated into eating peanut butter sandwiches and playing cards while trying NOT to get picked to go to set (as you'd get paid whether you actually were in front of the camera or not, and obviously playing cards was more fun). And when a new bar opened up near my house...well...it ended up taking the majority of my summer earnings (isn't that always how that goes?). Anyway, that's how I ended up being in a Karaoke competition, because I just happened to be in the bar when qualifying rounds were happening and had consumed enough cocktails to think that I could be the next Jewel (keep in mind that it was 2000).

Much to my surprise, I qualified.

Then, a few weeks (and many drinking nights) later, I was in the semi-finals.

Lo and behold, I made it to the finals, and that's where my picture comes in to play.

In order to give myself an edge, because I was now fully invested in winning the $500 prize, I decided that I'd get myself a stage costume. And since I was going to sing Nelly Furtado's "Like a Bird," I figured that dressing up like a bird would be a swell idea. I raided all of the closets in my house while a pal made me some shoes and soon, we'd managed to put together a pretty awesome costume, if I do say so myself... 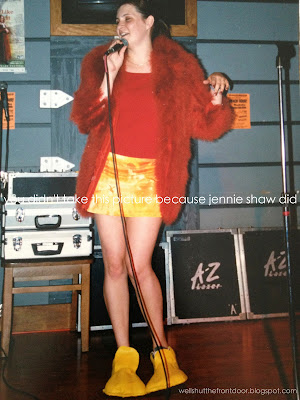 The bad news is that I got so nervous waiting that I may have had one too many doses of liquid courage and was drowning merrily swimming in a "Mariah Carey ain't got nothin' on me" pool of delusion by the time they called my name...as you can judge by my face...and weird flipped hand.

Needless to say, I didn't win. Nope. It wasn't even close.

Funnily enough, though, this wasn't my ONLY time dressing up as a bird... 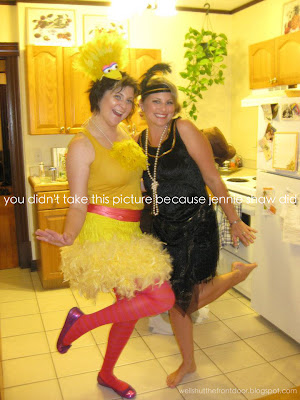 So the evidence suggests that I've got birds-on-the-brain, which I guess is better than BEING bird-brained. Bahaha!!

Until next time, thanks to Ady, Julia, and Jennifer for hosting!