About a week and a half ago, my Brother-From-Another-Mother (re: Brother-In-Law) flew from Toronto to Freddy to help celebrate The Remix's birthday. He does it every year, and it always adds an awesome element to whatever we end up doing for the weekend. Usually, the hour-and-forty-minute flight is pretty uneventful because there isn't much that can go wrong during such a short jaunt. However, this time, there was a bit of a snag.

Around the time that my BFAM was scheduled to take off, I got this FB message: 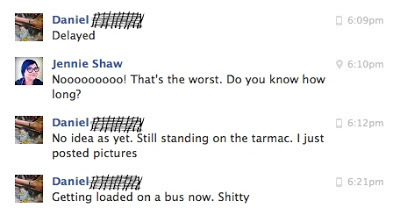 Naturally, I was left with several questions, with the primary ones being: Why are you standing on the tarmac and what the hell do you mean that you're getting on a bus?

Then, I moseyed on over to his page to see the picture he was talking about: 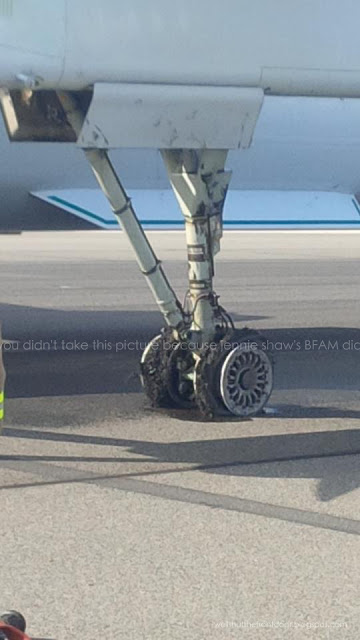 Holy crap on a cracker, right?

Turns out, the wheel totally exploded while they were taxi-ing to the runway for take-off. A bit even hit my BFAM's window, which would pretty much be the scariest thing of all time. But, since this was a plane packed with mostly Maritimers, everyone was quite civilized about it. 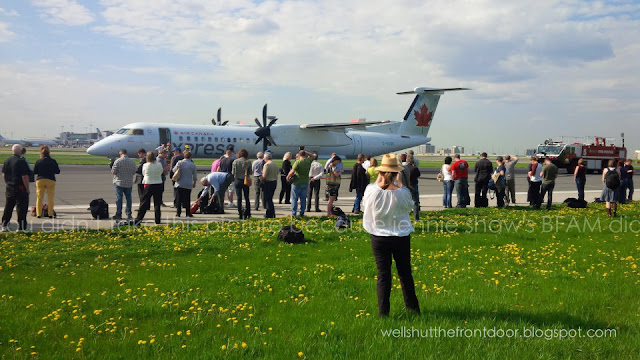 They de-planed in an orderly fashion, waited for the bus, went back to the terminal, were given vouchers for supper, and then boarded another plan about an hour later. Round Two of Take-off went much better, and everyone arrived unscathed.

A few days later, I was at a gas station when a headline in our local paper caught my attention: 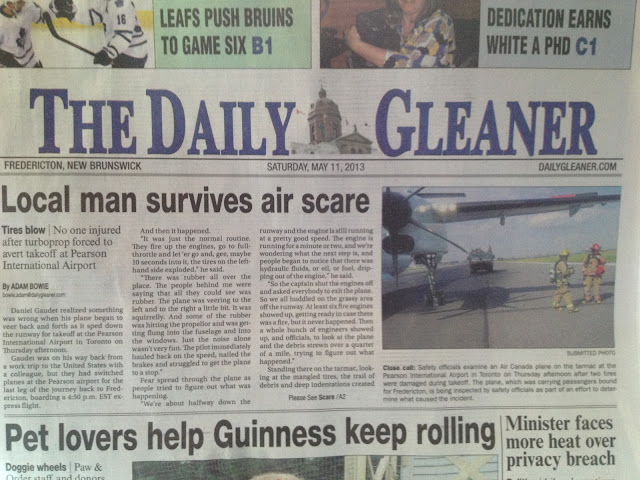 Does that picture look familiar? Yes, ladies and gents, this is the same flight that my BFAM was on and I hate to be a Picky Peggy, but in order to "survive" something, don't other people need to...well...NOT survive? And they didn't even get into the air, so really, it was more of a "taxi-ing scare" although I'll admit that it doesn't quite have the same ring to it. That said, I still bought the paper and will send my BFAM a copy because it's not every day that you're told--a week later--that you almost died.

Lesson Learned: Sometimes you can't trust everything you see in the news. Also, Maritimers will forgive just about anything if it means free food.