The Nail Files: Getting Some (Beaver) Tail

It's Canada Day on Monday, which means that it's a LONG WEEKEND, BABY! WOOT WOOT!!

So, in honour of my nation's day, I decided to do a little tribute to one of the more awesome animals we've got up here: The Beaver! 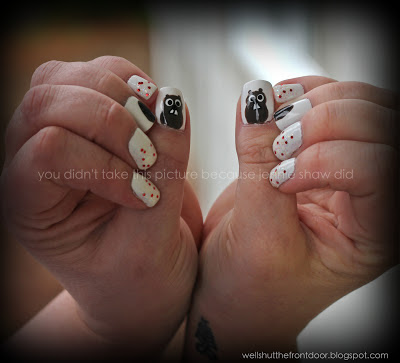 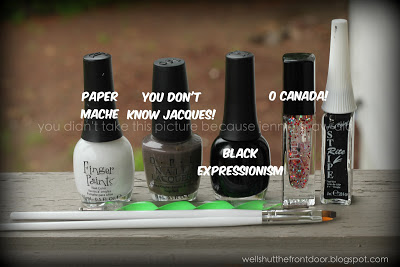 Pictorial For The Beaver: 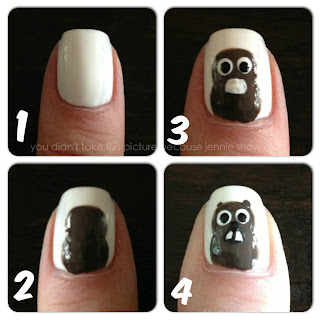 Step 2: Using a flat nail art brush, make two circles, on one top of each other using You Don't Know Jacques!

Step 3: Make eyeballs with Paper Mache and a medium-sized dotting too. Use Black Expressionism for the pupils (with a smaller dotting tool). With a small, triangular nail brush, make the teeth. Another little black dot for the nose, and you're all set for the final step.

Step 4: Carefully outline the teeth with the Black Rite Stripe and add two tiny ears with a small dotting tool and You Don't Know Jacques!

On the other nails, there are two coats of Paper Mache and then two coats of O Canada! (thanks for that, Julep, haha!).

Pictorial For The Tail: 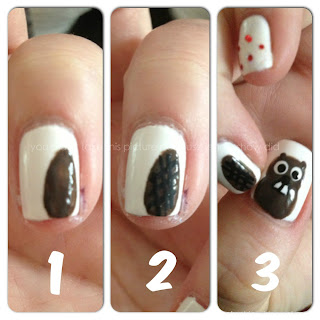 Step 1: Using a flat nail art brush, make a moderately-sized oval just off centre of your nail with You Don't Know Jacques!

Step 2: With the Black Rite Stripe, make some diagonal lines and then criss-cross them.

Step 3: Put the tail together with the beaver and think happy thoughts about Canada! :D

This one took some time, but it was cool because I'm all about Canadian Pride. Haha! And HEY! I'm sure that you've read the news but I'm going to be taking over hosting duties for The Nail Files starting next week! Tara and Vicki have done such an amazing job over the last year-and-a-half and I'm VERY excited to be able to keep the linkup going because it's one of my favourites! So next week, come by here and show off your fabulous manicures!! I'll even have virtual cupcakes for everyone because, you know, it's nice to offer food to guests. Haha!!

Have an awesome weekend, everyone, and see you here next week!!