I have a lot of jewelry, guys. A lot. Of jewelry. And lately, I've been wanting to change up how I organize everything. I like things that are a bit unusual, so when I found this super cool, bright pink velvet sewing model thing-y, I thought it would be perfect for my necklaces... 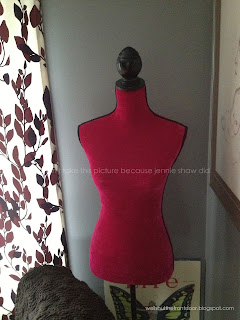 which it was, until I realized what a serious pain in the a-double-ess it was because the necklaces got all tangled and turned into one big mega-necklace that took forever to separate. Boo.

So, although the pink velvet model was cool to look at, it just wasn't functional. Luckily, fate was on my side and a few weeks later, I found a pretty good sized silver deer head at Winners, which got my brain a-ticking because I thought it would be fab thing to hang necklaces from. But, I needed more than one for my necklace collection and they didn't have any more, so I bought the one they did have and hoped that eventually, they'd stock some others. But, despite my bi-daily cruises around the store for a few weeks, no other ones showed up. Boo, the sequel.

Another few months went by (with the silver deer head just sitting in my closet) but I never found another cool faux head, anywhere. Then, I got the cheque from the drug study I was in and while perusing the ModCloth site (because they always have great stuff and the cheque was burning a hole in my pocket) I stumbled upon an amazing collection of faux animal heads (side note: OF COURSE THEY HAD FAUX ANIMAL HEADS BECAUSE IT'S MODCLOTH AND THEY ARE MY PEOPLE AND WHY DIDN'T I THINK OF CHECKING THERE MONTHS AGO?!?...anyway, moving on).

After agonizing over which ones to get, I decided on three: a ceramic chameleon head, black plastic antelope head, and tarnished gold rabbit head. 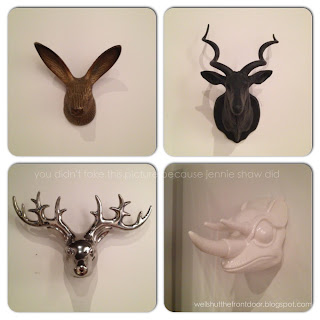 I guess you could say I'm putting a city spin on country décor. Ha! But seriously, how awesome are these??

Hint: the answer is VERY. 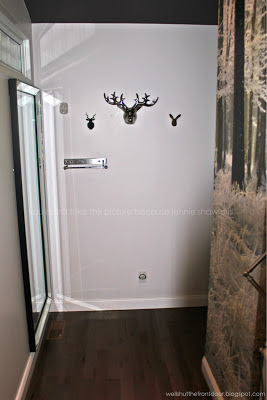 We have a massive mural in our bedroom of a white, mystical forest, so the row of heads fits the theme perfectly, while creating some visual interest. 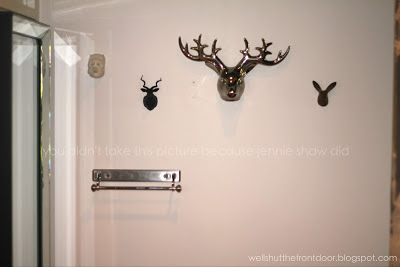 I added a silver paper towel holder to the faux-head-collage for my bangles, which is was the most inexpensive way I could find to display them. 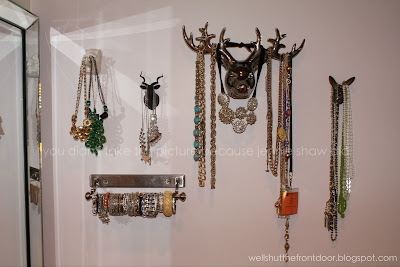 And here are the heads loaded with my stuff!

The longer necklaces are on the left while the shorter ones are on the right. I may need to add another bracelet holder, but I'm going to try and make the one work for a while before adding more holes to the wall. 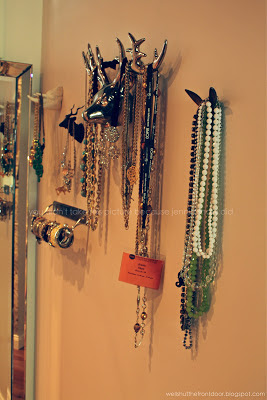 I just love how bohemian it looks! Plus, I can actually see everything! It's awesome! Yay!

So, kudos to Winners for having the deer head that started it all, and for ModCloth for stocking the other three (because it means I'm not alone in my want for cool faux heads, haha). Also, I need to give a shout-out to The Remix for putting them all up on the wall (thanks, babe!).

How do you store/display your jewelry? Do you have fun heads too? ARE WE FAUX HEAD FRIENDS? Haha!

Email ThisBlogThis!Share to TwitterShare to FacebookShare to Pinterest
Labels: My Hubby...My Hero, Randomness