July 1st, already? SURELY YOU ARE JOKING! Oh wait, you're not? Okay, then...I guess it's time to partaaaaay because that means it's CANADA DAY! And what better way to celebrate than a short list about what I love about my home and native land?


The answer is nothing. Well, until it gets a little later in the day, anyway. We may love our beer but it's 8:11am so there's at least two more hours until it's reasonable enough to crack our first Coors Light. Ha! 1. We Believe That Love Is Love: With all of the WONDERFUL news spilling out from our cousins to the south this week, I was reminded about how much I dig living in a country that has a pretty solid history for recognizing social injustice and making adjustments. No, we're not perfect, but there's a conscious effort, and that's awesome.

2. General Niceness: In a spin-off from number 1, I like living in a country where people are generally quite nice. Yeah, there are stereotypes out there that stretch the chill Canadian vibe a bit too much but those stereotypes merely exaggerate what truly exists. I can't tell you how many times I've been helped by a stranger when I was lost, or had someone offer me the use of their phone because mine had died, and once, I even had a parking attendant scrape the ice off my windshield because he was worried that I couldn't see well enough.

3. Maple Syrup: Does this really need an explanation? Have you ever had maple-glazed salmon, or smothered your waffles with thin, sugary lines of deliciousness? Or perhaps you're more of a cover-your-entire-plate kinda person? Either way, the appreciation of maple syrup crosses boundaries and unites us all because maple syrup is the bomb and it makes everything better.

4. Healthcare For All: This one is a little closer to my heart, as I'd probably still be undiagnosed if it weren't for our "free" (tax-paid) healthcare system. Yes, there are flaws in the system, as there are with most things, but it's a relief to know that I can head to a hospital if I have a broken arm without spending time on Google first, researching how I could set it myself using leftover firewood and a ripped up t-shirt because I wasn't sure how I'd be able to pay for my necessary medical assistance. After all, I'm a writer, which means that I need my arm to be in working order so I can hack away at my keyboard (preferably both, actually).

5. The Ryans (Gosling and Reynolds): No explanation needed. Also, you're welcome.

6. Free French Lessons: No matter if you're in a public or private school, we all take French lessons. It's a fancy language that sounds pretty sexy even if you butcher it, and it's cool that everything sold in Canada has both French and English on it, as it's kind of like having those school lessons continue forever. Some may not see the point, but I appreciate the inclusivity because it's a public declaration that both French and English speakers should have equal representation. In addition, sometimes the French word for things is funny and I like funny things. For instance, a shower is called a douche and that's awesome.

7. Our Tight Relationship With England: Since Canada (somewhat) began as a British colony (I get that I'm over-simplifying the issue), we've always had a special relationship with England. That means that not only do we get access to amazing Cadbury speciality chocolates and copious amounts of Earl Grey tea, but we also feel like we have a personal relationship with The Royals. In fact, I spent a significant amount of time in my youth agonizing between Harry and Wills (we're close, so I can call him that), should I ever have the opportunity to date and then marry either of them (pre-Kate, obviously). Regardless of the fact that it was clearly never going to happen, it's cool that our countries are close enough that it seemed like a plausible possibility to an infatuated 12-year-old girl.

8. The Eh Team: If you live in Canada, or are a Canadian living elsewhere, you're an automatic member of The Eh Team, which is such a hilariously amazing way to represent the best expression ever that I don't really have much else to say on the matter (seriously, I want to be friends with the person responsible for creating this). 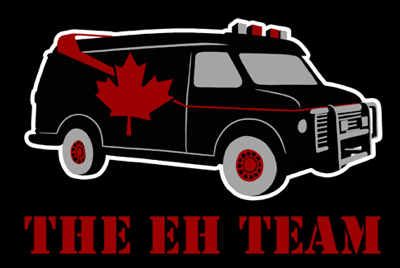 So, there you have it: eight of the many reasons why Canada rocks. What would you add to the list? Did I miss anything major?

Hopefully the endless rain clears up by tonight so we can see some fireworks because nothing says I LOVE MY COUNTRY better than watching fireworks explode in the sky while drinking a beer, eating maple syrup, trying not to offend an Acadian with my brutal French accent, and discreetly fantasizing about the ab-licious Ryans. Yeah, it's going to be a busy night. Ha!

Have a happy Canada Day, everyone!

Oh, and I also did a special, although somewhat unexpected, Canada Day-themed manicure that you can check out here because I'm not a huge fan of the colour red, which makes it challenging when it's 50% of your country's colours.