Remember when I read TEATIME FOR THE FIREFLY and it was the bestest book ever? No? Well then you better click here to read my raving review. If you've already read about the amazingness that is Shona Patel's debut novel then prepare yourself for the following awesomeness because not only is Shona super talented but she's also a whole lot of fun and that, ladies and gentlemen, is quite the rarity. I was BEYOND excited when Shona agreed to a little Q & A with me and I can't wait to share her answers, so let's get started! 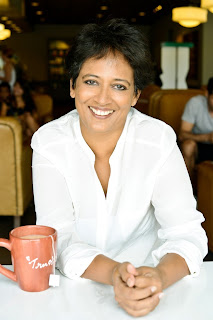 My questions are in italics while Shona's answers are in non-italics (or "normal" font formatting, haha).

Before we get started, thank you so much for agreeing to this little interview! I positively adored TEATIME FOR THE FIREFLY and am psyched with the opportunity to talk about how awesome it is with you ask you a few questions about it.

Thanks Jennie. I am very excited to chat with you.

1. Layla is an extraordinary character. She’s simultaneously strong and vulnerable, confident yet humble and a generally awesome gal who I’d totally have a cuppa with. From reading other interviews you’ve done, I know that TEATIME FOR THE FIREFLY is based on your parent’s lives but I’m curious as to how you were able to capture the subtle contradictions of Layla’s personality in such an authentic way. Aside from your mother, where else did you draw inspiration?

Layla’s character is different from my mom’s in many ways. What I got from mom are her anecdotes and the setting for Teatime for the Firefly. Mom was a very colorful storyteller! Layla is a fictitious character pieced together from several sources to fit my story. She is caught between two worlds: the old and the new, just as India was back in the 1940’s when the British colonial world was giving way to Indian independence. Given this historical backdrop I had to create a character with inner conflicts and contradictions that mirrored her world outside. Layla’s character evolved as my story solidified.  It was a very organic process.

2. As you originally wanted TEATIME FOR THE FIREFLY to be a film, who would be your dream casting for Layla and Manik?

I have often thought about that. I think that’s really the Casting Director job. Good actors get into the role and become the character even though they may look different. Think of Joaquin Phoenix as Johnny Cash in “Walk the Line." Would I have thought of casting him in that role? No way! But he totally got it. So I would leave that job to the film people. What I do have are crystal clear references for all my characters. I am a very visual person and I have to have a picture in my mind when I write. 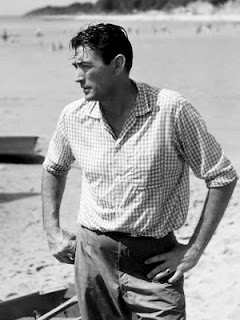 I based Layla’s looks on my Indian friend (Rupanjana Sengupta) and Gregory Peck’s photo is something I got off the web. Please notice the way he is standing, Manik is all about body language! 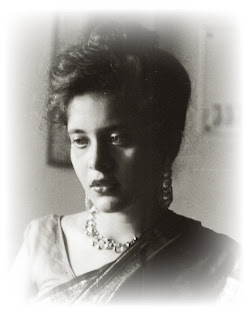 Right, so all of the characters are mega-gorgeous. Noted and moving on. Haha!

3. I loved the side-story of the tomatoes (I’m trying to be vague here so I’m not spoiler-y). Did that story come from one of your personal experiences from living on a plantation or is it pure fiction?

Hah- the tomatoes! That’s another patched-up story. Here’s how that came about: Davey Lamont, my Scottish tea planter friend once ran a commercial venture growing famous heirloom tomatoes. He told me the secret was to water them with diluted milk. That’s the first part of the story. Part two: a few years ago I visited the Sudeley Castle in Gloucestershire and lo and behold there in the royal garden were all these tomatoes “plump as a milkmaid’s rump” falling off the vine. So voila! I joined up the two bits and had a story!

4. And now for one of my favourite parts of TEATIME FOR THE FIREFLY: Siestas! WHY DON’T WE HAVE THOSE IN CANADA? Seriously. I think that having a little snooze in the middle of the day is a great thing, and it served Layla and Manik well in the early stages of their marriage. Was that still happening when you were a child? And while you were writing, did you indulge in your own siestas? You know, to really put yourself in Layla’s shoes? ;)

I stoutly claim life without siesta is dull and meaningless. India (any hot country for that matter) is known for its post-lunch siestas. Between 1 and 3 pm life comes to a grinding halt. Office workers droop over their desks, shops pull down shutters and not even a crow will ‘caw’ to disturb the peace. Even thieves and robbers sleep. Come 3pm (oh jubilation!) one wakes up rested and lotus-eyed to a fine cup of tea. Now that’s what I call civilized!
I am a guiltless napper. Luckily, a writer’s job entitles me to nap any time and nobody dares to challenge me.

5. I wasn’t surprised to learn that you had studied English Literature because your prose is, at times, breathtaking. At the same time though, I didn’t find it to be excluding or too serious and I’m not sure I can think of another author who walks that line as well as you do. Because I found your voice so unique I’d love if you would share a bit about the process you went through to find it.

Well thanks, that’s a really a nice compliment. I have no aspiration of being a “writerly” writer. That’s like too-gourmet, fine-dining: the food is confusing, the people pretentious and the conversation arid and boring. Who wants that? Good books and good food are essentially the same. Good can be fine, but fine doesn’t necessarily translate into good. I aspire to be a good AND fine writer like Harper Lee. Besides her monstrous talent, I wish I had her wisdom, her humility, her all-embracing inclusiveness. I want to draw readers deep into my world, not have them view it from the outside like some exotic specimen inside a bell jar. As a writer, writing about a foreign culture, I can either dumb things down for my western audience or appear too exotic and rarified. I want neither. What I really want to do is share my stories. I want my readers to say things like, “I really felt like I was there,” or “I get it. That’s awesome.”

6. On your website, you have an entire section dedicated to tea (which is awesome, by the way). In one post, Who needs a Tea Cozy, you suggest that if I show you what kind of tea cozy I have, you will be able to tell me the person that I am. Here’s a picture of mine (it’s actually a matching set of a cozy and a teapot). 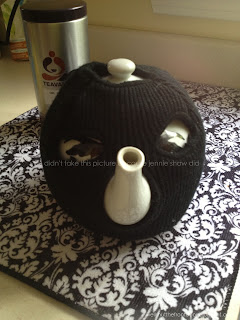 So what kind of person does that make me? (Note: the answer can’t be “ridiculous." Okay, maybe it can. Ha.)

Okay here is your psychoanalysis for the day: You are naughty, full of sprinkles and wear pink pyjamas. Plus I would never trust my bubble wrap around you because you would burst it all.

Holy crap on a cracker, you really CAN tell a lot about a person from their tea cozy because sprinkles and bubble wrap are two of my most favourite things ever (so you're right not to trust me on the latter)! However, I'm more partial to zebra pyjamas, although I do have a few pink sets as well. Ha! Thank you so much, Shona! :)

This was a delight.  Thank you and cheers! :)

So do you see why Shona's the best? DO YOU SEE?!? Haha!! But seriously, if I wasn't already a fan then her fun answers to my somewhat silly questions would have sealed the deal. So for reals, guys, you should totally read TEATIME FOR THE FIREFLY, and stalk Shona on Twitter because who knows what she'll say next? And, of course, by "stalk," I mean follow un-creepily. ;) She has a website, too, and you'll learn a whole lot about tea if you stop by (which basically means that you should).