Last summer, I became a farmer.

Fine, fine, maybe I'm exaggerating, but I did grow my own tomatoes.

I documented the process with a series called Tomato Watch 2012 because I was convinced that I had a black thumb but, lo and behold, the plant grew a bunch of tomatoes and it was GLORIOUS! 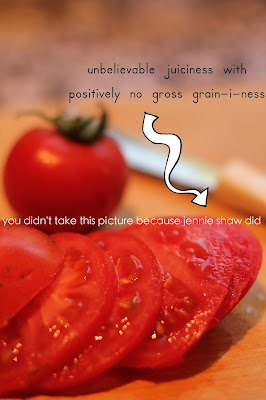 There were enough tomatoes for me make a few jars of pasta sauce and for the latter part of the summer, my burgers were topped with the juiciest and tastiest tomatoes ever. The whole thing was pretty freaking awesome, as it had been years since I'd grown anything and I was super proud of myself for not only keeping a plant alive, but healthy enough to grow fruit.

So, naturally, I decided to do the same thing this year, only start earlier so I could have MORE tomatoes. All winter, I dreamt about the different sauces I would make when summer came again: Vodka! Three cheese! Garlic! And the second that the Costco garden centre opened this spring, I high-tailed it to get my future pasta sauce tomato plant. They were much larger than I remembered from the previous year but I figured that just meant there'd be more tomatoes, so I put one in my cart and ran to the cash.

I brought it home, planted it in a larger planter than last year so it would have room to grow, and waited for the cute yellow flowers to start blooming. And they did--almost right away, in fact--but as you can tell by the title of this post, things didn't go as planned because, in late July, I noticed that some of the tomatoes were already starting to turn red, which was NOT how things happened before. 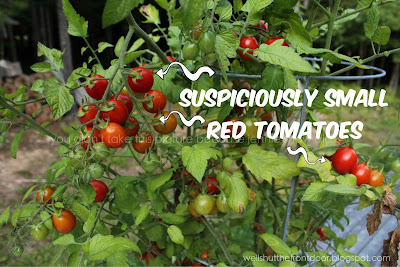 That can't be right, I said to myself, so off to Google I went.

And you know what? It wasn't!

Because it was a CHERRY tomato plant!!

Just so we're on the same page, here's a side-by-side of the tomatoes I THOUGHT I was growing and the stupid tomatoes that I actually got: 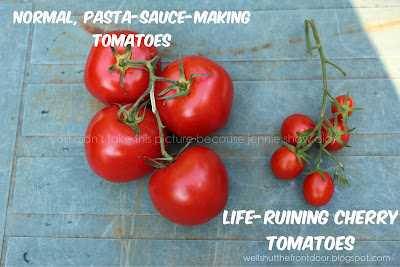 Not even almost the same, right? *headdesk*

I ranted and raved for a few days, sporadically throwing the dropped cherry tomatoes at nearby trees (not that any made contact) and pretty much hating life (slight exaggeration but you get what I mean) because after all of my planning and hard work...I'm left with exactly zero jars of sauce because I'm an idiot (or because Costco tricked me by not labelling the plants correctly). Either way, though, it will be a sad, sad fall due to the lack of delicious, home-made pasta sauce.

If you have any ideas on how I can cook these cherry tomatoes, I'd sure love to hear them because I've got bowls of these freaking things everywhere and have no clue what to do with them! Haha!