It's been a very long time since I've given out a bag of mad props, but that's just because I've been insanely busy (which you can tell by the lack of posts, as of late), but this one has been a long time coming.

I've been wearing glasses for the better part of seven years and it's safe to say that they're now part of my look. 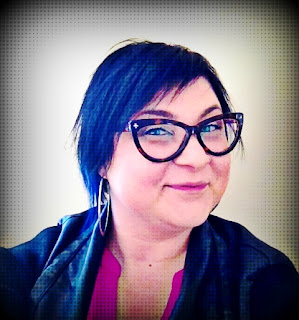 It took me a very long time to find glasses that suited my face but eventually, I discovered the Derek Cardigan brand of glasses from Clearly Contacts and fell in love with their vintage vibe (and their cuteness. I mean, just look how cute I am! Haha). The only problem is that the lenses they come with are basically garbage--plastic, actually, if you can believe it or not. So, I've gotten into the habit of replacing the lenses with ones made of actual glass and after going around to all the opticians in Fredericton (because that's just how I roll) I discovered that Hakim Optical had the best prices, which made them my go-to place for quality lenses.

Not only that, but the majority of the time, my lenses are ready in less than 24-hours. Sometimes, even on the same day, which is amazing because their primary competition sends them out for like, a week! Yeah, it makes no sense to me either because, you know, I need my glasses to see and not having them for that long is complete and utter insanity. But just when I thought that Hakim Optical couldn't get any better, they did!!

You see, much earlier in the summer, my beloved Derek Cardigan, no-longer-available frames, broke. 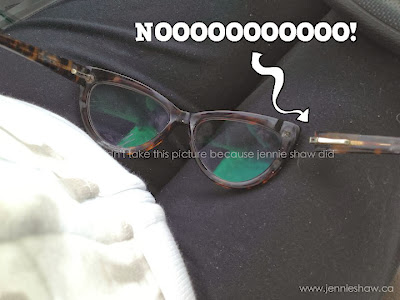 I don't think I'm exaggerating when I say that this was one of the worst days of my life.

Yes, I have many pairs of glasses but these ones are my everyday ones and the mere thought that I'd never be able to wear them again was almost enough to make me run to my doctor's office for a valium prescription (I kid, I kid…I already have access to ativan. ;) ). I emailed Clearly Contacts to see if they did repairs, but they said no!

After I recovered from completely losing my mind because who the heck sells glasses but doesn't repair them (??!!!), I decided to take a gamble and pop into Hakim to see if they'd be able to help. I didn't have high hopes because I didn't buy the frames there, but lo and behold, they said they could! Or, specifically, Ben said that he could…once he went home and got his soldering gun, that is (which, by the way, was hilarious because he literally picked up his keys and left through the side door). Less than a day later, I got the call that he had fixed them!!

Everything was again right in the world and I went on living my life and sporting my awesome, signature frames. But then, just a week ago, the other side broke!


Naturally, I practically annihilated the speed barrier as I made my way back to Hakim (not really), where the very lovely Lori took my poor frames and said that, although Ben was out, he would be back sometime soon and would call me if the glasses could be fixed.

Could be fixed? Oh the horror.

The next few hours were tense, akin to waiting for a verdict from a sequestered jury, and I jumped every time my phone rang, hoping to hear good news. Finally, the following morning, I got the call. Ben had done the impossible AGAIN and fixed my glasses!

So, without further adieu, I hereby award Hakim Optical in Fredericton, NB with a massive bag of mad props for being the most awesome optical store ever. 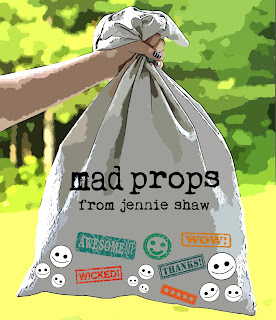 If you EVER need glasses or an eye exam, and you live in Fredericton (or the surrounding area) let me save you some time running around and JUST GO TO HAKIM! Lori, Bill, and Ben are super nice and helpful, and they always greet customers with a smile. Their prices are phenomenal in comparison to others, and they're even willing to deal with pseudo-hysterical customers who barge into their store, cradling broken glasses in their hands like a baby turtle. So if they can handle me, then I'm pretty confident they'll be able to help you too. Haha!