the time i met gavin degraw (and then may have cried)

Last Wednesday, my pal, Allie Bee, and I went to see Gavin DeGraw and Matt Nathanson.

Wait, what's that you're saying? Didn't Allie and me just seen Gavin DeGraw a few months ago? Well, yes. Yes we did. And it was after that concert that we decided to get tickets for this one because he was that freaking good. Even better than the very first time I saw him, about a hundred years ago when One Tree Hill was all the rage. Haha!

So, off to Ticketmaster, we went. 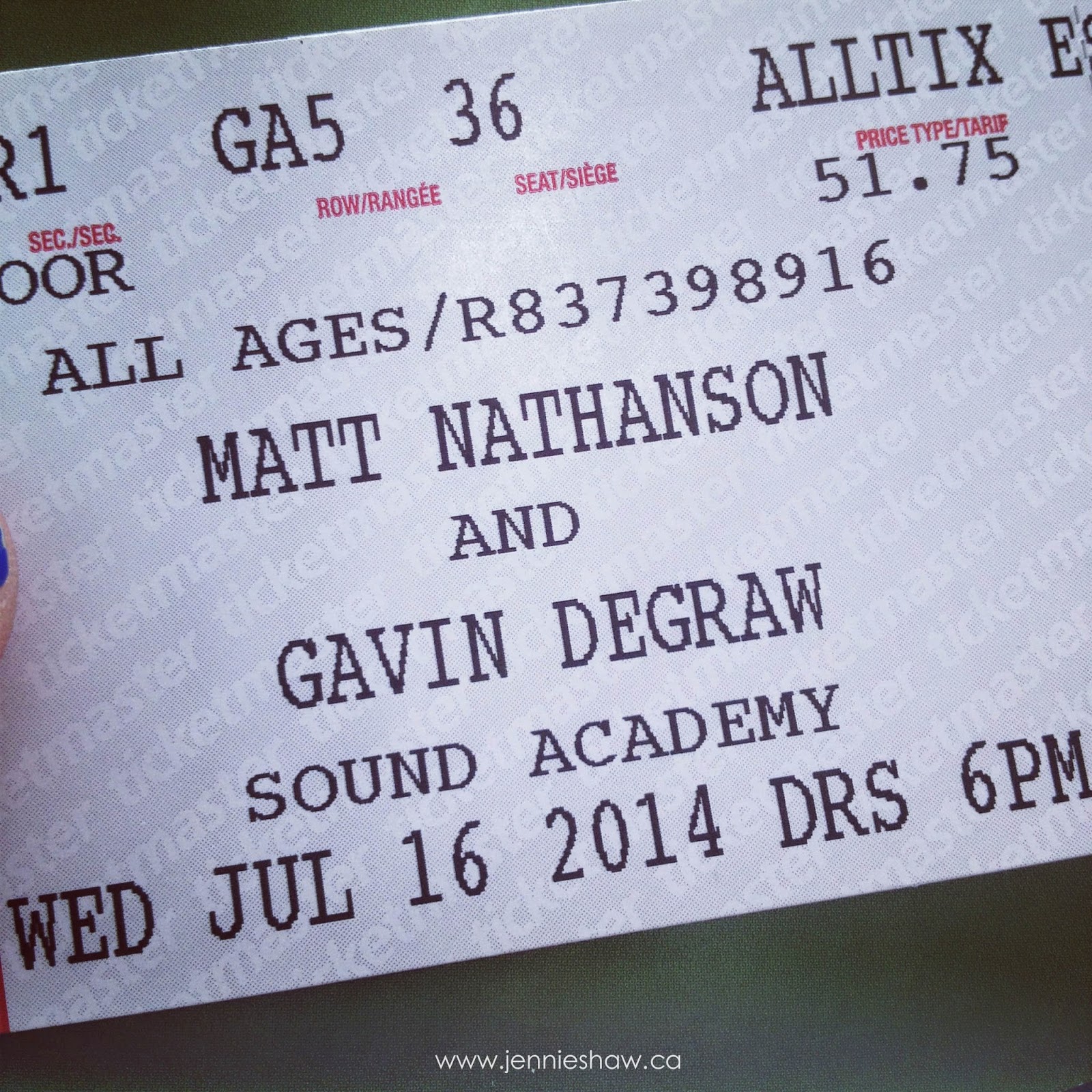 Now, when we first got the tickets, we thought the start time had to be a mistake. Because, you know, what concert starts at 6:00PM on a Wednesday? Without consulting anyone but ourselves, we decided that getting there at 6 was crazy, so we planned to arrive around 8. But then, thankfully, we told our plan to another pal who was all: DON'T DO THAT! I DID THAT ONCE AND I MISSED THE WHOLE CONCERT! And since this particular pal is late for everything, we took her on-time warning seriously. And it was a good thing we did because when we arrived at 7, the opening act was already finished and Gavin was setting up. If we'd gotten there at 8, we would have missed the whole thing!!

So thanks, other pal! Haha!

Here are some pics I took of what could arguably be called the Best Gavin Concert Ever (for reasons you have probably already suspected, considering the title of this post). 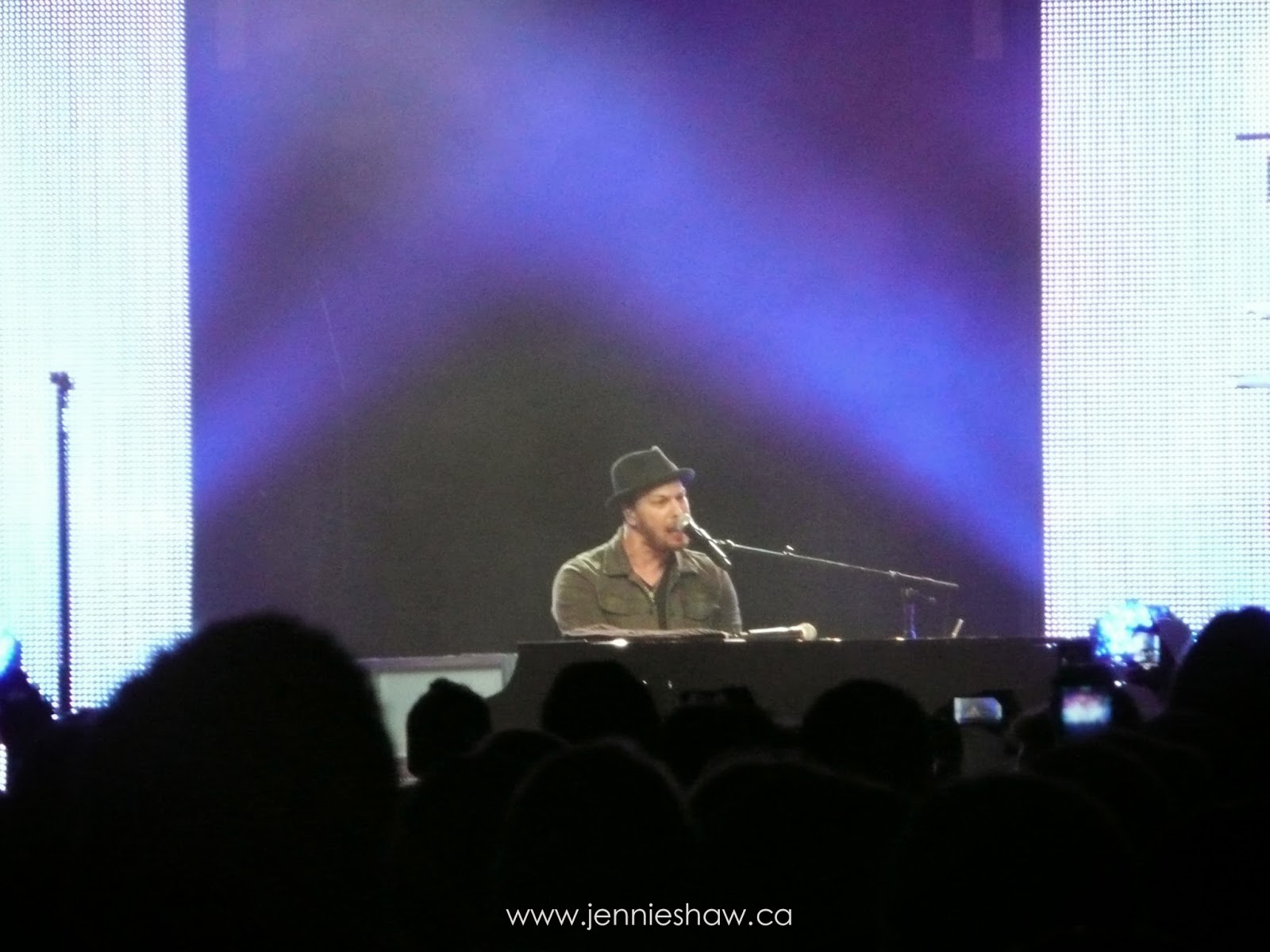 For the record, in my iTunes playlist, his name is Gavin My Piano Lover. And no, I'm not kidding. Ha! 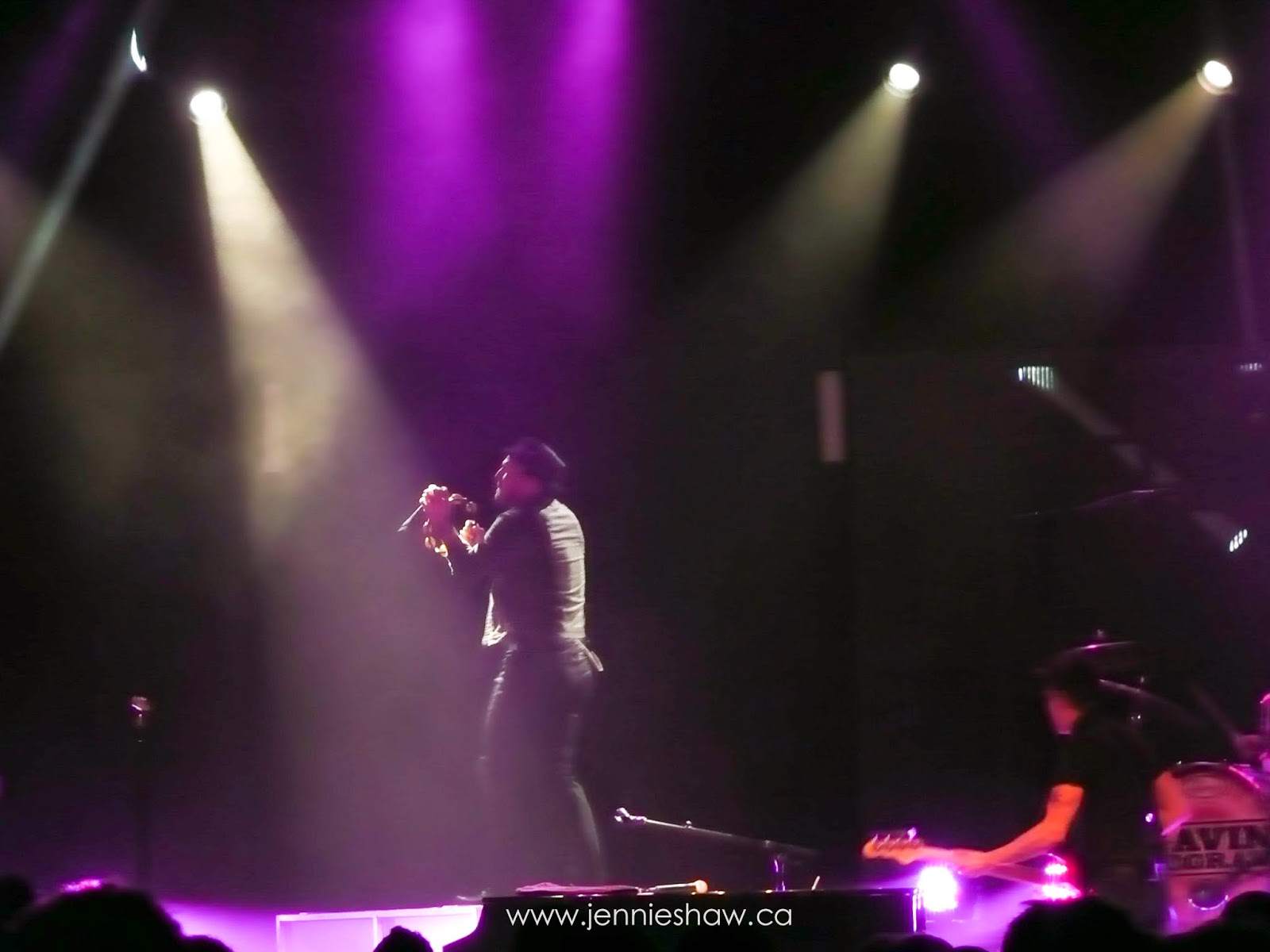 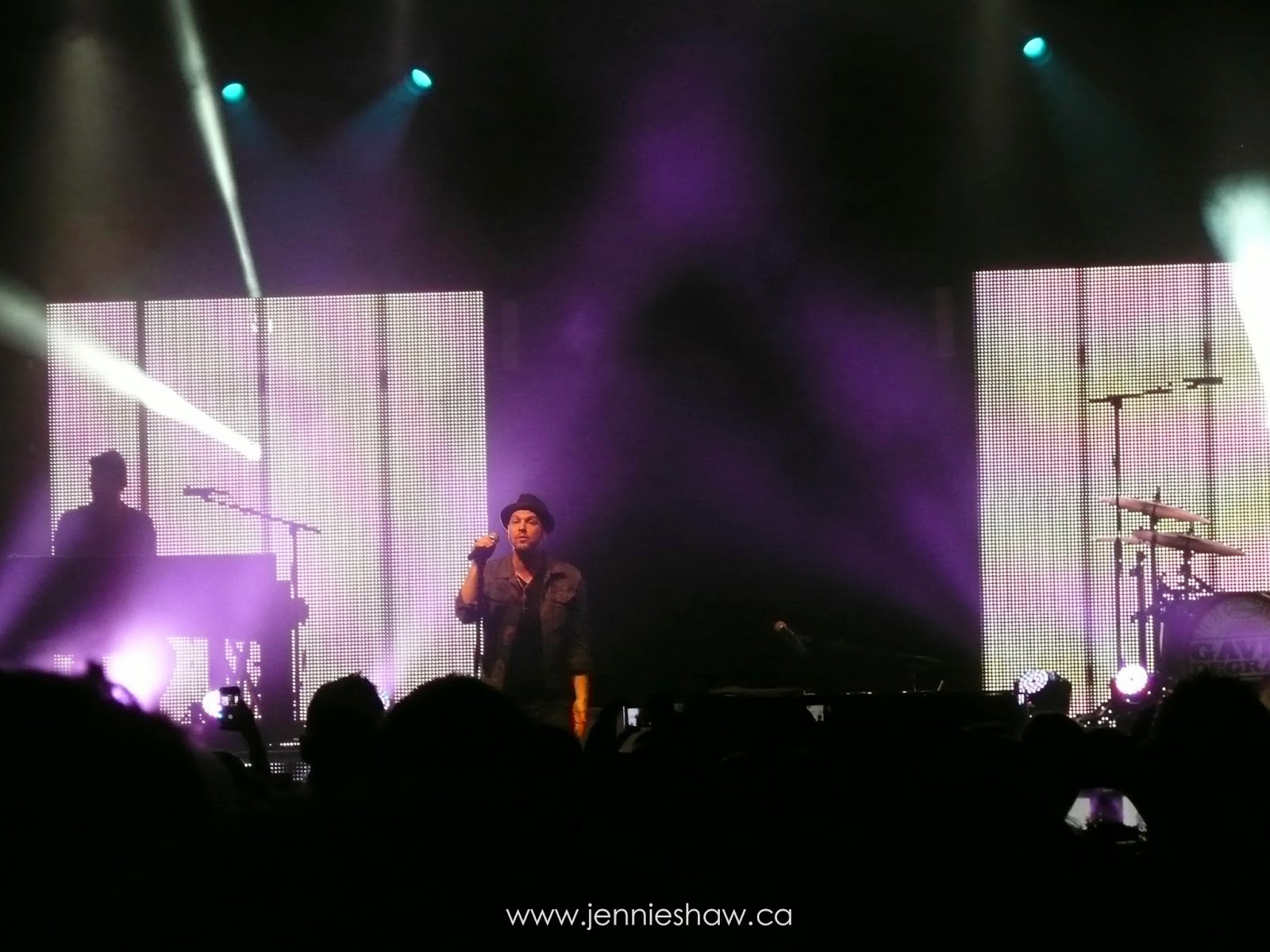 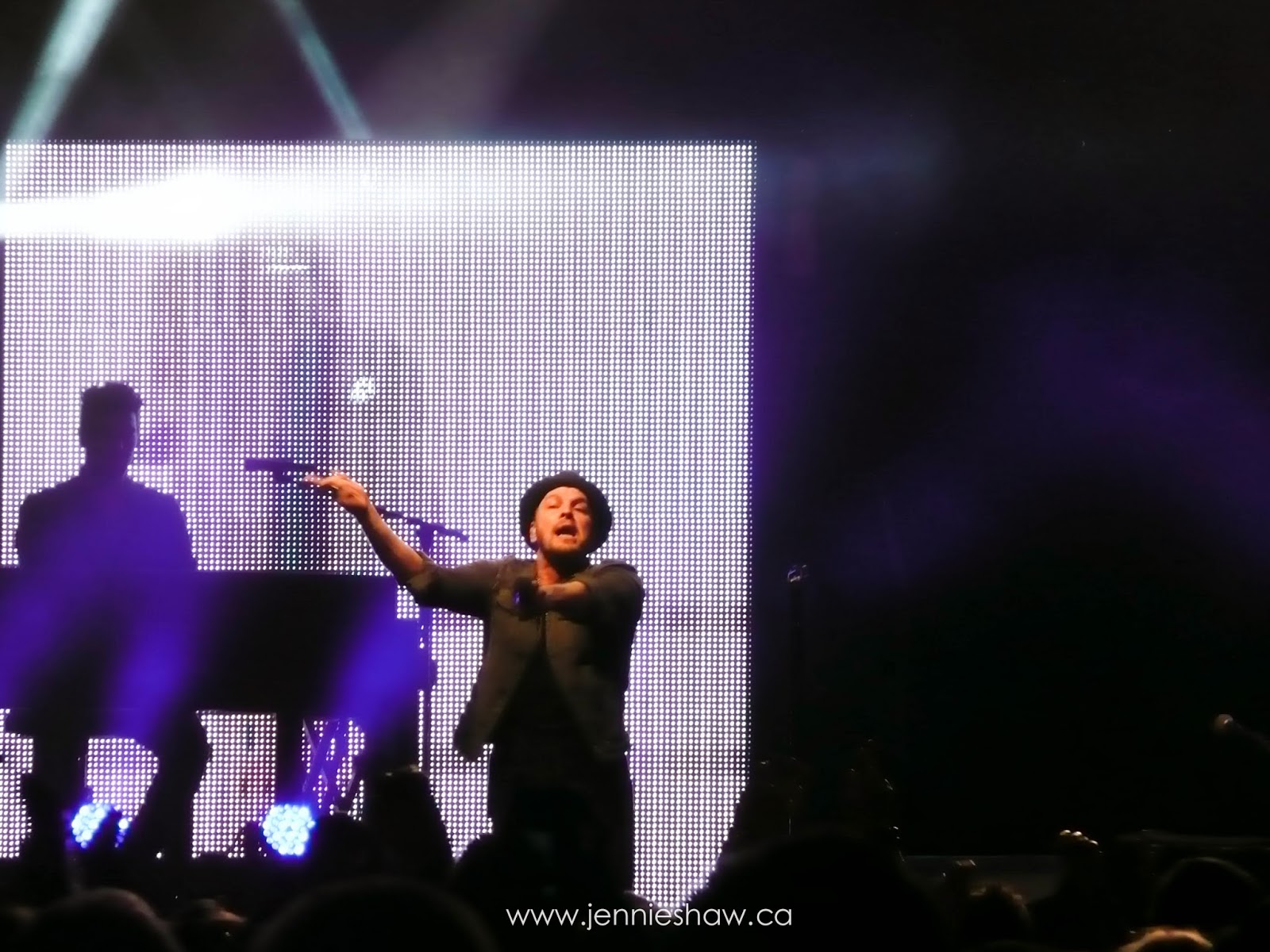 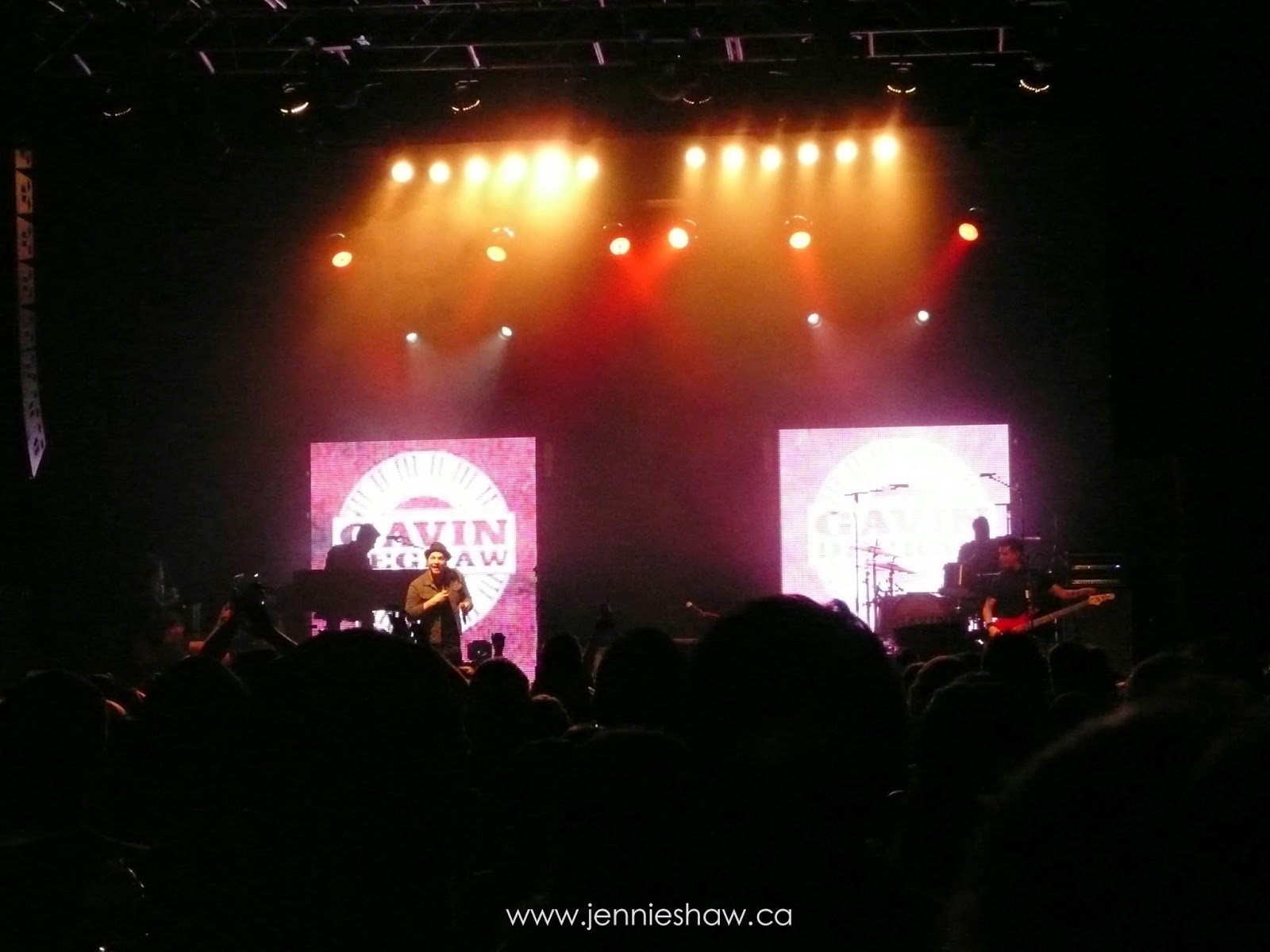 Holy guacamole, did I ever dance up a storm.

Just nearing the end of his set (like, 30 seconds), Allie Bee and I decided to hit up the washrooms, knowing that the second he finished, the line would be 100 ladies deep. We scuttled off to the side of the venue and, sure enough, when we got out, there were a whole whack of ladies waiting. Score!

We headed outside for some air, which is when the most amazing thing happened.

We noticed a cluster of people in a corner of the patio and then realized it was Gavin! He has VIP tickets you can buy to meet him after his shows, but for the extra $100, it just wasn't in the budget, so you can imagine how excited we got (okay, so it was mostly me who was losing her mind).

Side Story: Not three hours earlier, we were chatting with the awesome Daniela, and told her that we unequivocally wouldn't want to meet him. I've had brief brushes with singers before and it's just THE WORST when they end up being bad humans. You know, like using offensive language or being stuck-up, and since I love Gavin way too much to risk never being able to listen to his music again should he turn out to be awful, meeting him was something I never wanted to do.

That is, of course, until the opportunity presented itself. Haha!

Anyway, so I ran over to try and get close, but there were too many people and it wasn't really working out. I turned away, slightly disappointed, which is when little Allie Bee caught my eye and waved me over to where she was standing--along the fence that Gavin was working down!

Many very pretty and groupie-ish women later, he was actually in front of us. I'll keep it real and say that I don't totally remember what I said, but I'm pretty sure that he called me "darling," and he shook my hand, which I didn't even care about despite it being covered in random stranger germs.

And then we took this picture! Eeeee!! 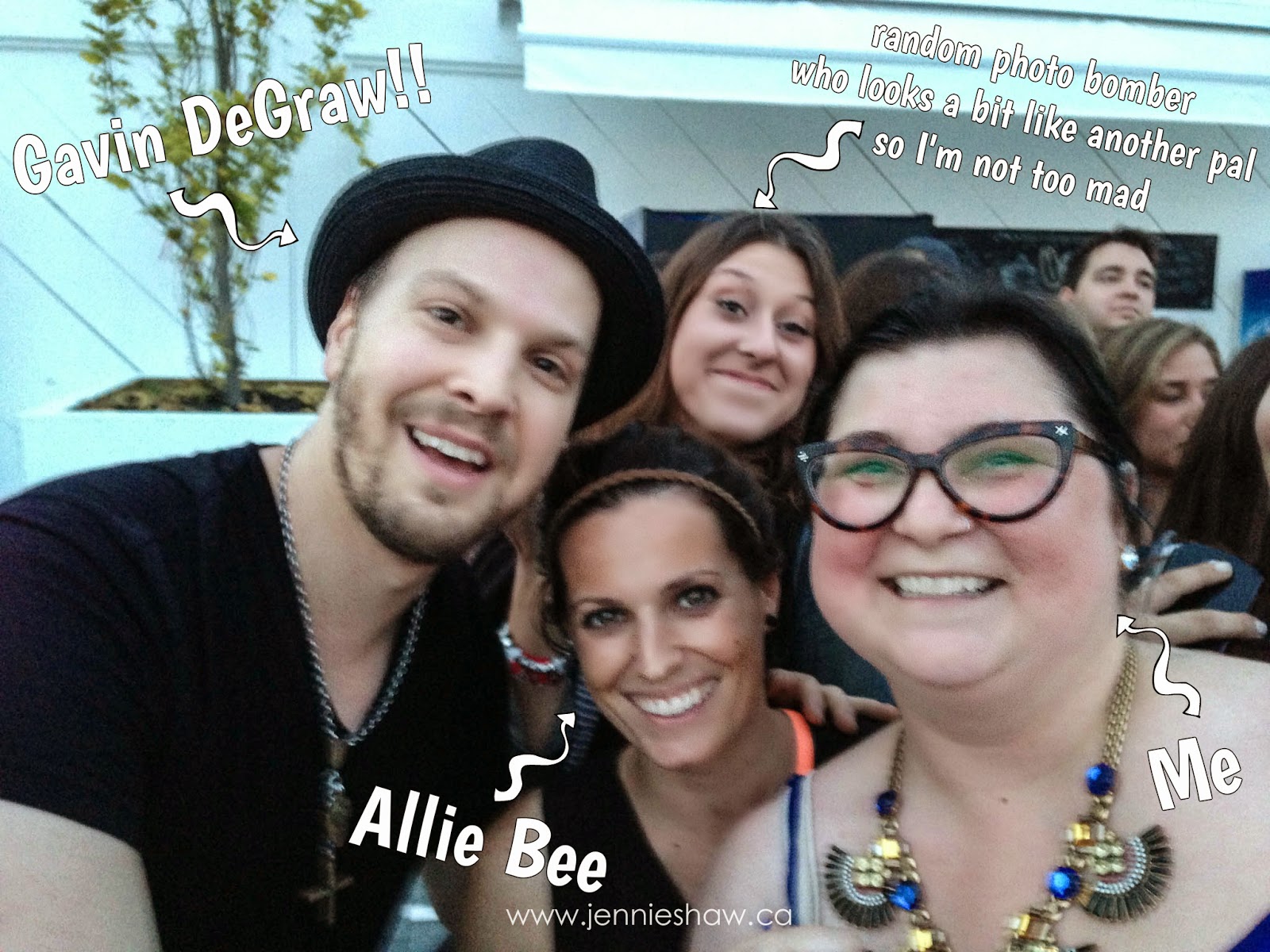 It's a little fuzzy, but one could argue that it's due to my jittery excitement. Ha!

He left after that, so we were seriously lucky to be the last ones. And then I may have had a mini cry in the corner because I was so overwhelmed.

After all that delirium, it was time for Matt Nathanson, who was probably one of the best performers I've ever seen. I felt a bit bad because the crowd had thinned out, but Matt still put on a fantastic show. He has a few hits, which he saved for the end, but even so, we had an awesome time. He even came out into the crowd--all the way to the back! And the best thing about him is that he mixed other songs in with his own. He even included Fancy and You're The One That I Want! Awesome! 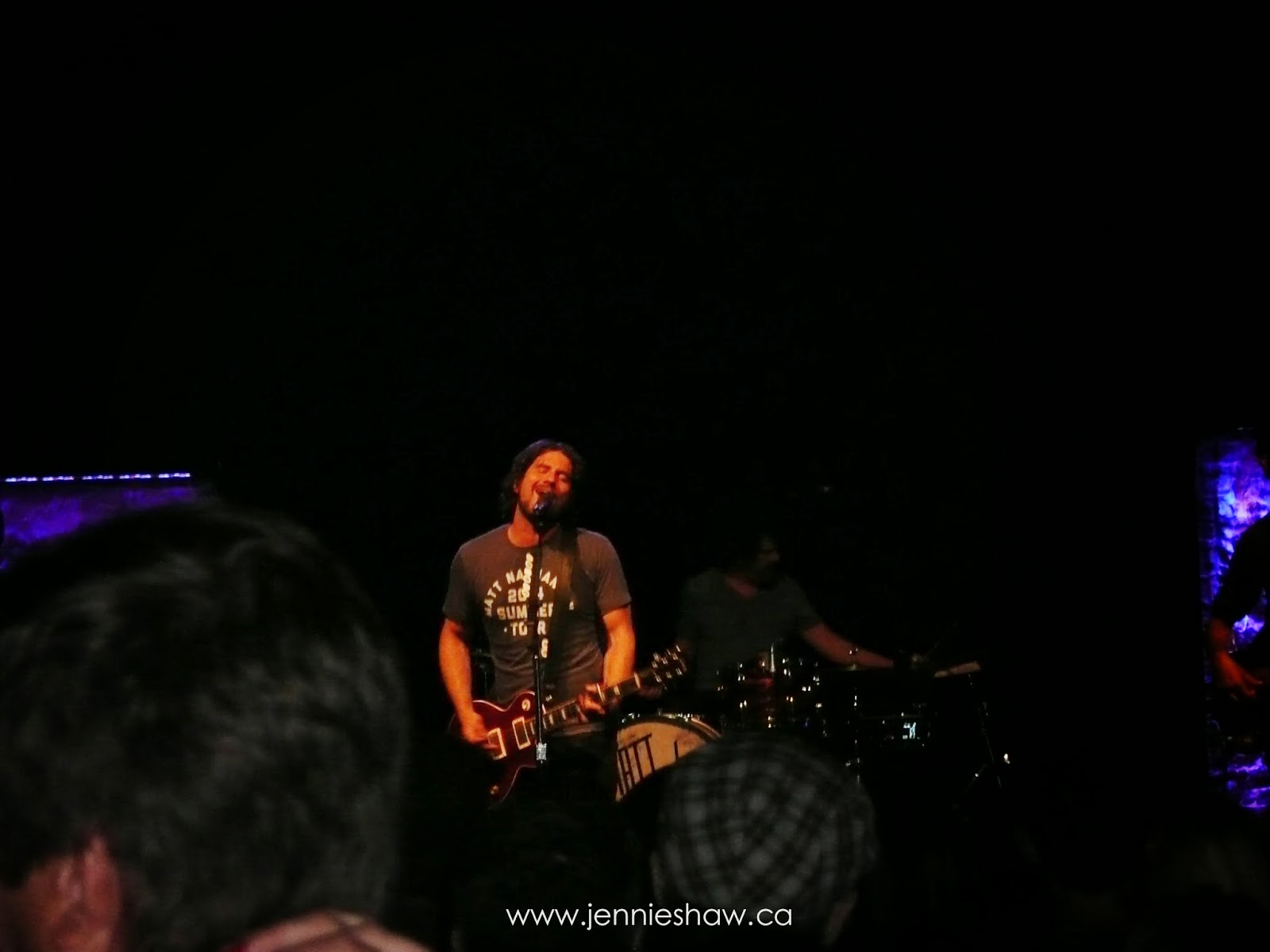 At first, I was all: Is he really wearing his own concert tee? What the what? But then he peeled it off and threw it into the crowd, making it way less creepy and way more awesome. Ha! 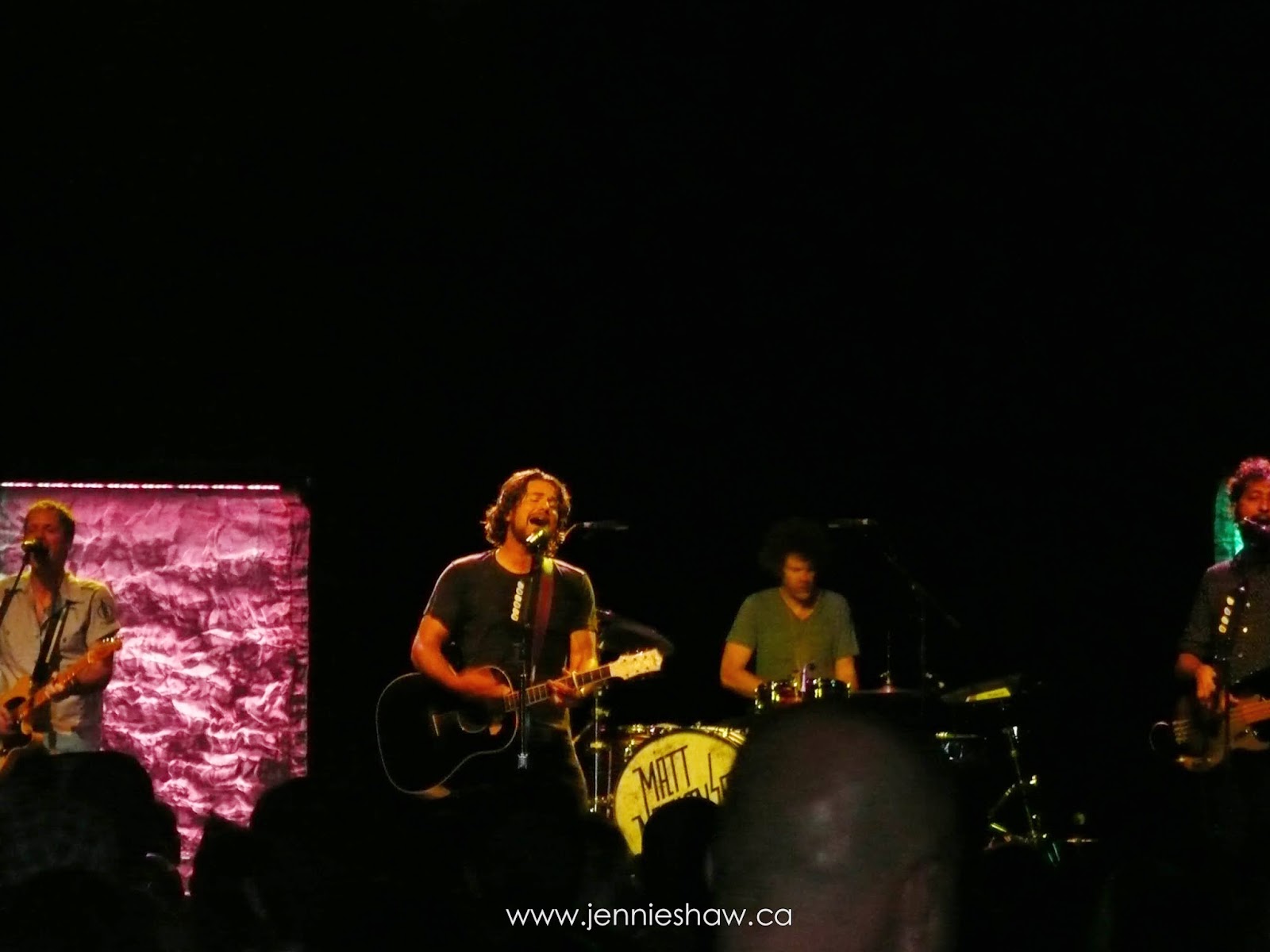 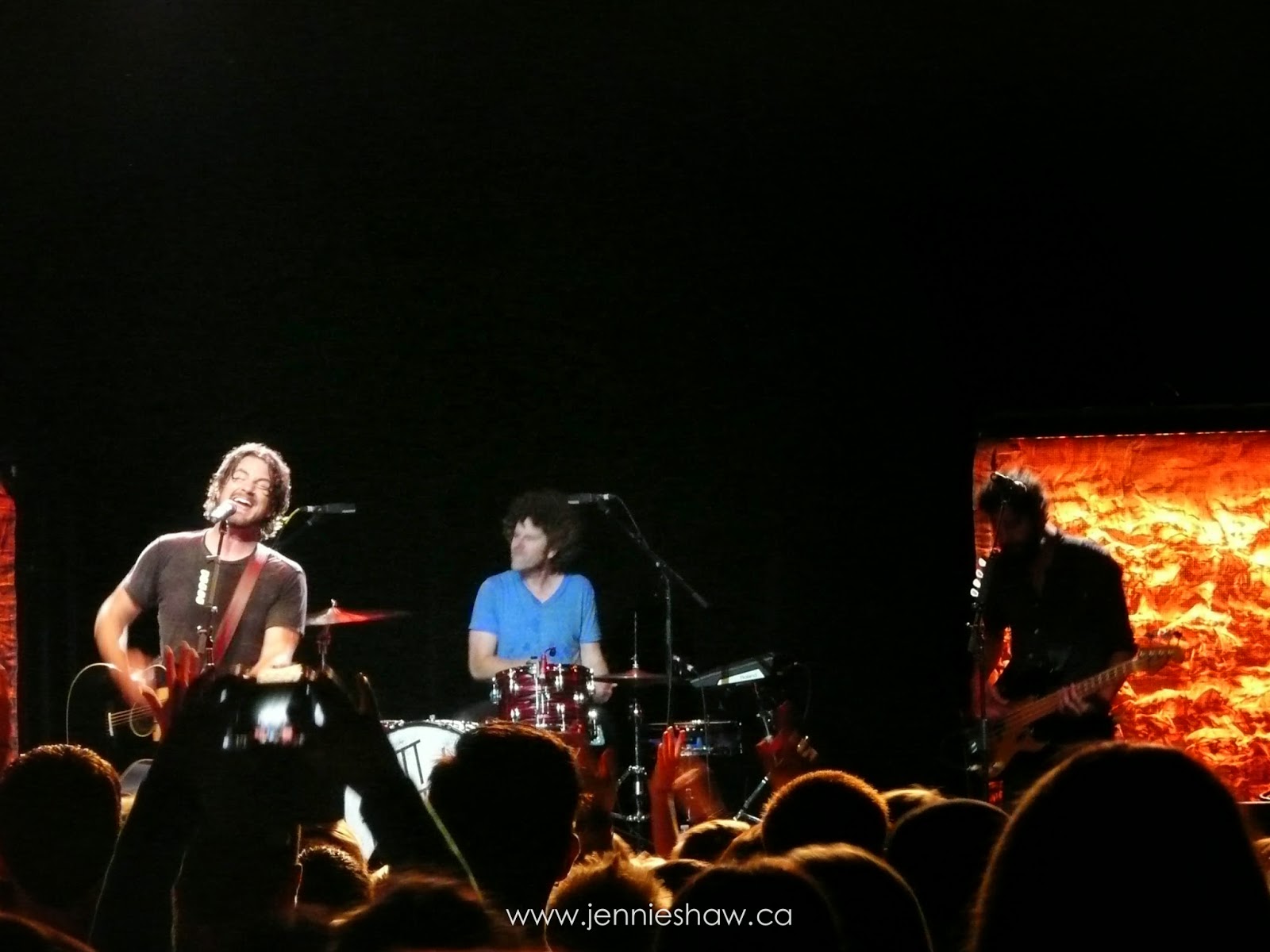 So if you have a chance to get tickets for any of their remaining summer shows, DO IT! Who knows, maybe you'll even meet them!

But, uh, if the tickets say the show starts at 6, then you should probably get there on time. Haha!