When The Remix and I first moved to the countray, we knew that nature would be in our grill, but that knowledge didn't prepare me for the degree of nature-fest that awaited us. The biggest source of our nature extravaganza is our pond, which is about three times the size of an average swimming pool and takes up the majority of our front yard. In the nine months we've lived here, we've seen/heard coyotes, observed flocks of turkeys boguarding our bird feeders, discovered we have a pervy peeping pom, cleaned up dead mouse presents from barn cats, ooed-and-awed over baby ducks, and contained our tiny fur babies when they freaked out at horses walking down the road.

In the beginning, we were both so psyched about the pond because it meant that we could go floating in the summer and skating in the winter. But then I was informed that, lurking beneath the dark waters, were fifteen-or-so fish--comprised of four koi and a dozen-ish trout.

Obviously, I wasn't much of a fan of the fish because (a) If they touched me while I was floating in my amazing lounger, I was pretty sure that I'd die. And by die I mean freak out to the point that I'd have a heart attack, which would eventually kill me because we live in the countray and ambulances take a while to get here, therefore giving the freak-out-heart-attack just enough time to finish me off. Not really, of course, but that's where my mind goes and the mind is a powerful thing. Ha! And (b) The fish needed the pond to be aerated throughout the winter, which meant that there'd be no skating à la Little Women. A more devastating disappointment than I expected it to be, although entirely justified because why wouldn't I want to live a Little Women experience, minus the near-drowning?

But, over the summer, the heat trumped my fear of fish-touching and eventually, I was even diving into the pond. Okay, so I didn't actually dive because although the fish would probably get out of my way, the exact moment I closed my eyes and went underwater, a shark would mysteriously appear and chomp me to bits. Hmm...this is seeming similar to a post I wrote about scaring the crap out of yourself when you're home alone. At least I'm consistent in my fears, right? Haha! But even though I didn't dive in, I did wade into a shallower section and swam in small circles, doing doggie paddle until I cooled off enough to stop sweating and then getting out as quickly as possible, so that marked some progress, although my fear of the fish mostly remained.

But then, something very unexpected happened: One day, about a month ago, I looked outside to see a strange, tall, skinny, alien-looking thing, staring at me from across the pond. 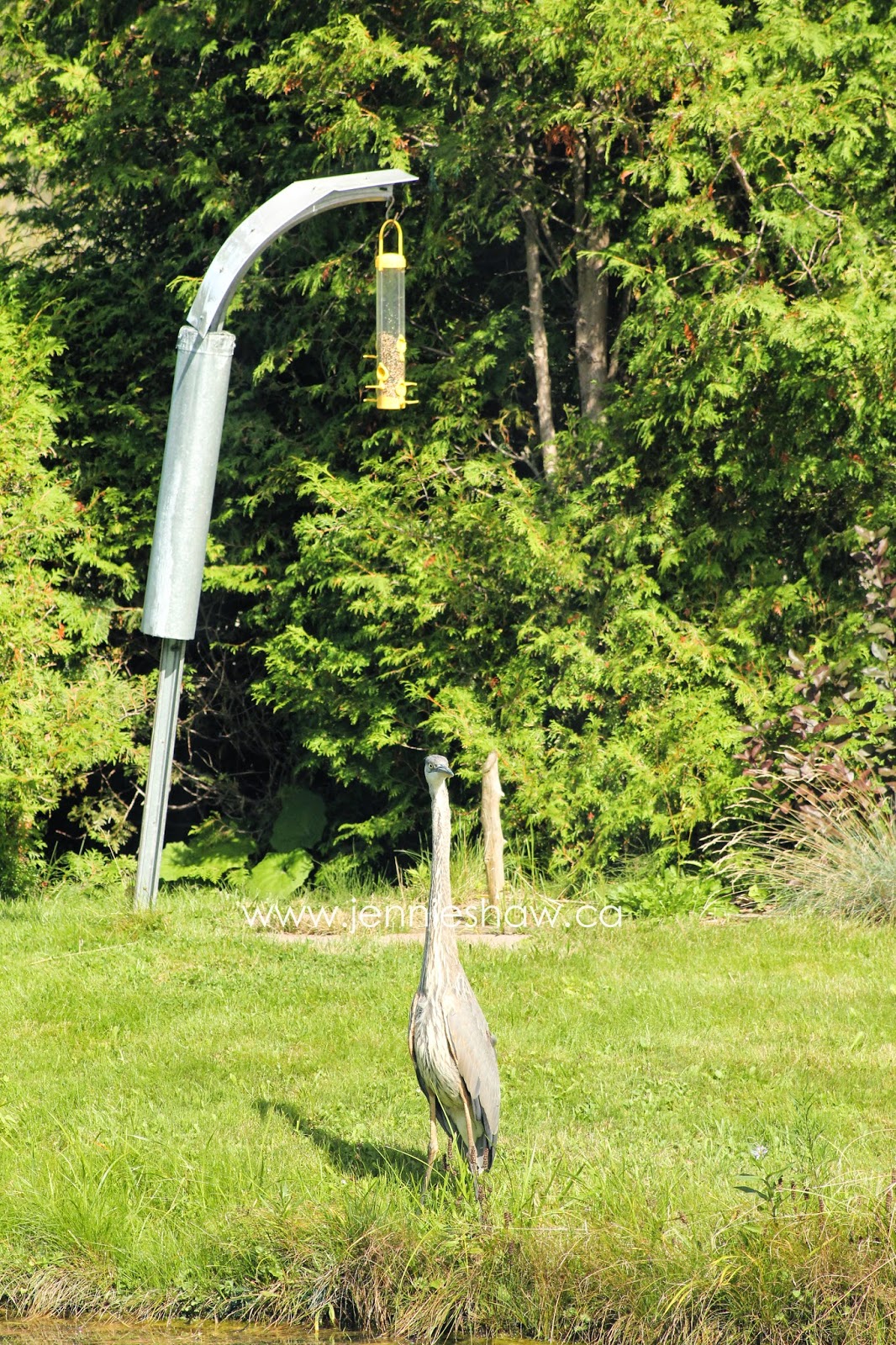 How creepy looking is this!
Hint: the answer is extremely.


I couldn't have had less of an idea what kind of bird looked like a long-necked, vaguely prehistoric chicken, but when it started walking, I finally realized what it was. A heron! 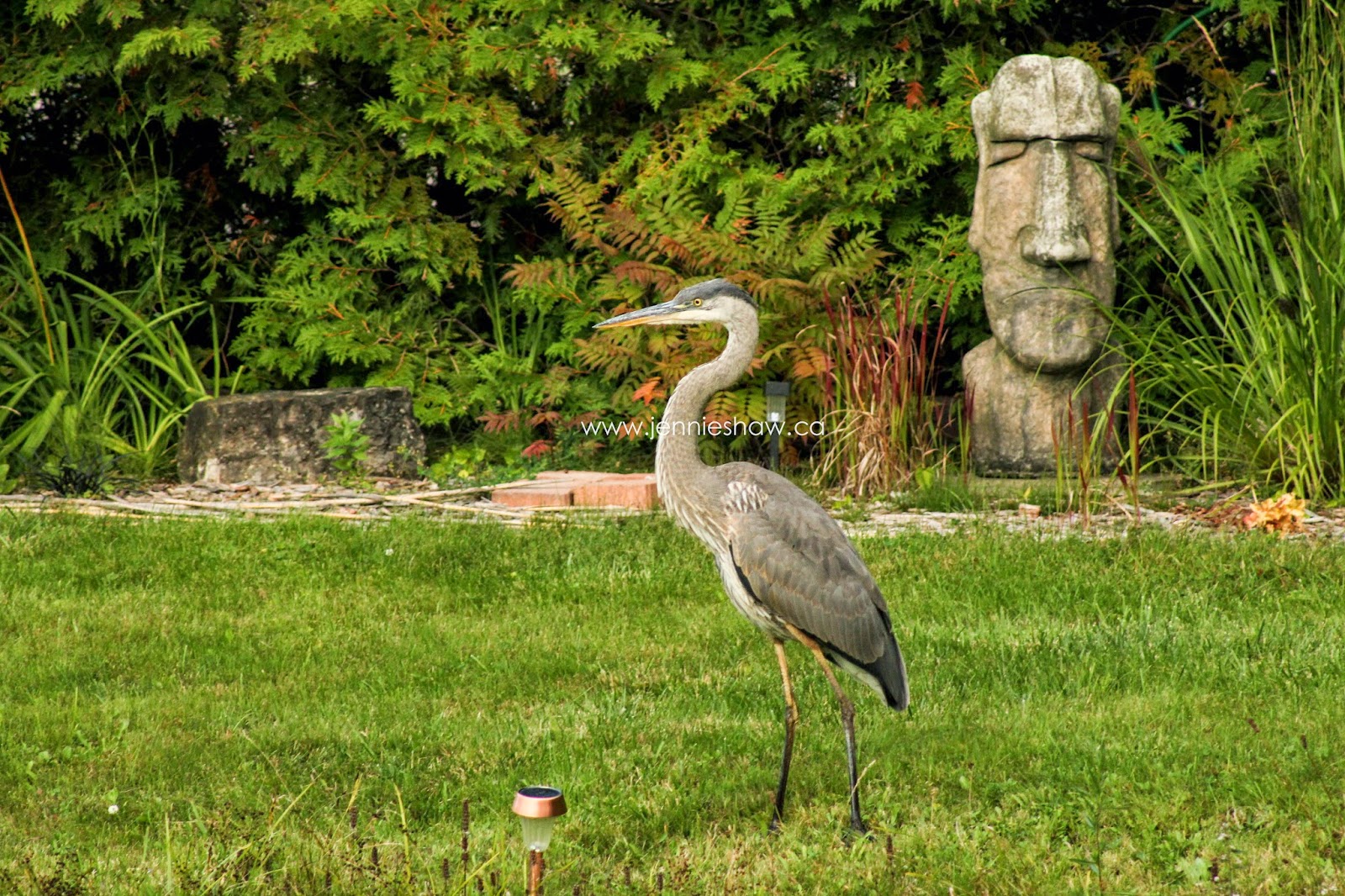 At first, I was all COOL! A GREAT BLUE HERON! I REMEMBER THAT FROM GRADE SEVEN SCIENCE CLASS (or maybe it was Grade Six? Five? Clearly, this is a vivid memory, ha!). But my surge of joy was quickly snuffed out when I remembered a pal telling me that a heron ate all the fish in her dad's pond, which is when I freaked the freak out.

In case you're wondering, no, it's not lost on me how for the entire summer, I wanted the fish gone but the SECOND that a predator wanted to eat them, I was suddenly all NOT MY FISH BABIES! Haha! I think my attachment has something to do with the fact that I named them. Or, I named the Koi anyway, because the trout are too similar looking for me to keep them straight. And because I'm positive that you're just DYING to know, the big white and orange one is Curtis, Frankie is orange and black and about half his size, and Cher is the diva who looks like a giant goldfish. (In the spring, the fourth Koi got sick and died before I could name him #sadface.)

Anyway, when I realized that the heron was most likely looking for dinner, I put down my camera and ran into the front yard, screaming and waving my hands like I was being attacked by a million bees. Of course, this was before I Googled to see if herons are aggressive but thankfully, they aren't and he just flew away. 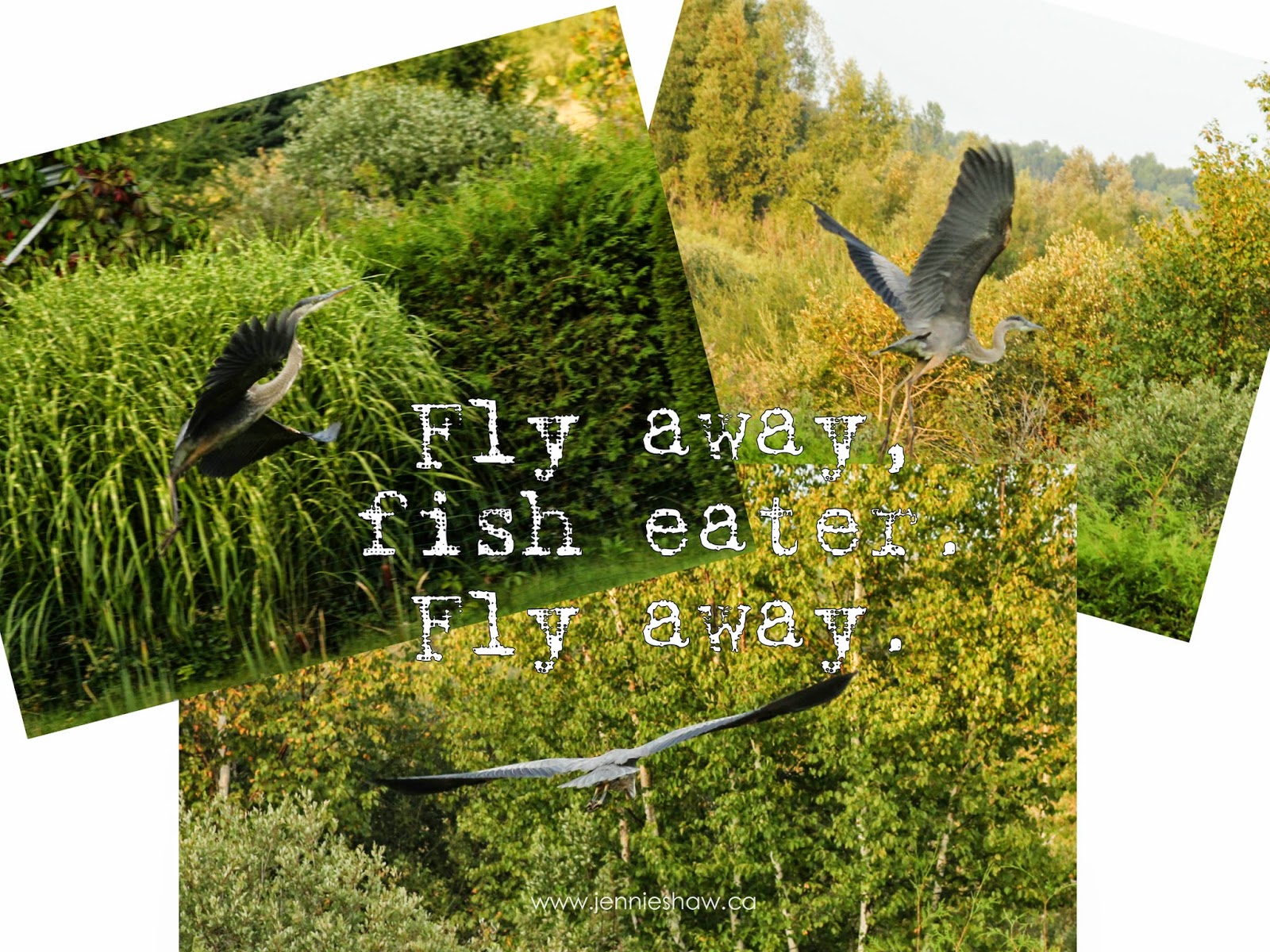 But it turns out that the heron was the least of our worries. About a week ago, I saw some rippling in the water, by the side of the pond. I didn't think much of it as that's where Cher likes to chill, but then I noticed the same kind of ripples in the same spot a few more times that afternoon. I brought out my camera with its telephoto lens but I still couldn't catch whatever it was.

The next day, The Remix saw the ripples too, but only caught a glimpse of what made them.

"It has ears!" He cried, running back into the house. "Something's swimming in there! It's a mink!"

"A mink?" I asked, because what the frack would a mink be doing in our pond, but then The Remix reminded me that the people who lived here before us had peacocks and pheasants as pets (yes, I'm serious) and because of said random bird pets, minks used to sneak into the cages and help themselves to a raw-poulrty-ish buffet. Meaning that, in all likelihood, it was probably a mink.

Shockingly, The Remix and I have a combined Mink Knowledge Score of zero and, as with some general Google searches, there was inconsistent information, which gave us little choice but to branch out.

After chatting with my Subway gals, who have more experience with countray living than I do (what up, ladies!) my worst fears from Google were confirmed: Minks are total assholes. They will, quite literally, rip your face right off and since they're territorial, not only would they try and eat all our fish, but our dogs were also in grave danger of a mink attack. So yeah...there was no question we'd have to get rid of them. And by we, I meant somebody else.

I called animal control who, for reasons I still don't quite understand, aren't mandated to help with non-domestic animals, meaning that unless the mink turned into a rabid dog, they didn't have to do anything. When I tried to change my story from "wild mink" to "potentially rabid dog," the remarkably unhelpful receptionist didn't fall for it and then briskly wished me luck in either trapping it myself or hiring someone else, before hanging up on me. Gotta love government, right?

Still full of optimism, my next call was to a pest control operation. The man was very nice but when he gave me the estimated cost of catching and removing a mink, I was suddenly overwhelmed with confidence on how good of an idea it was to trap it ourselves. In fact, The Remix already had a trap that he bought for a mysterious creature that ate a hole through our garage door last winter (which we have now agreed was probably this stupid mink), so he put it near the area we saw the ripples and we hoped for the best.

Days went by without any action in the trap or ripples in the pond and by day six, we were convinced he'd moved onto fishier ponds. But, because this mink really is an asshole, just when we were set to retire the trap, he came back. Grrr.

Just to be on the safe side and confirm that we really did have a mink and not some otherwise harmless animal, I got my camera out to take some shots as he took a few laps around the north side of the pond. 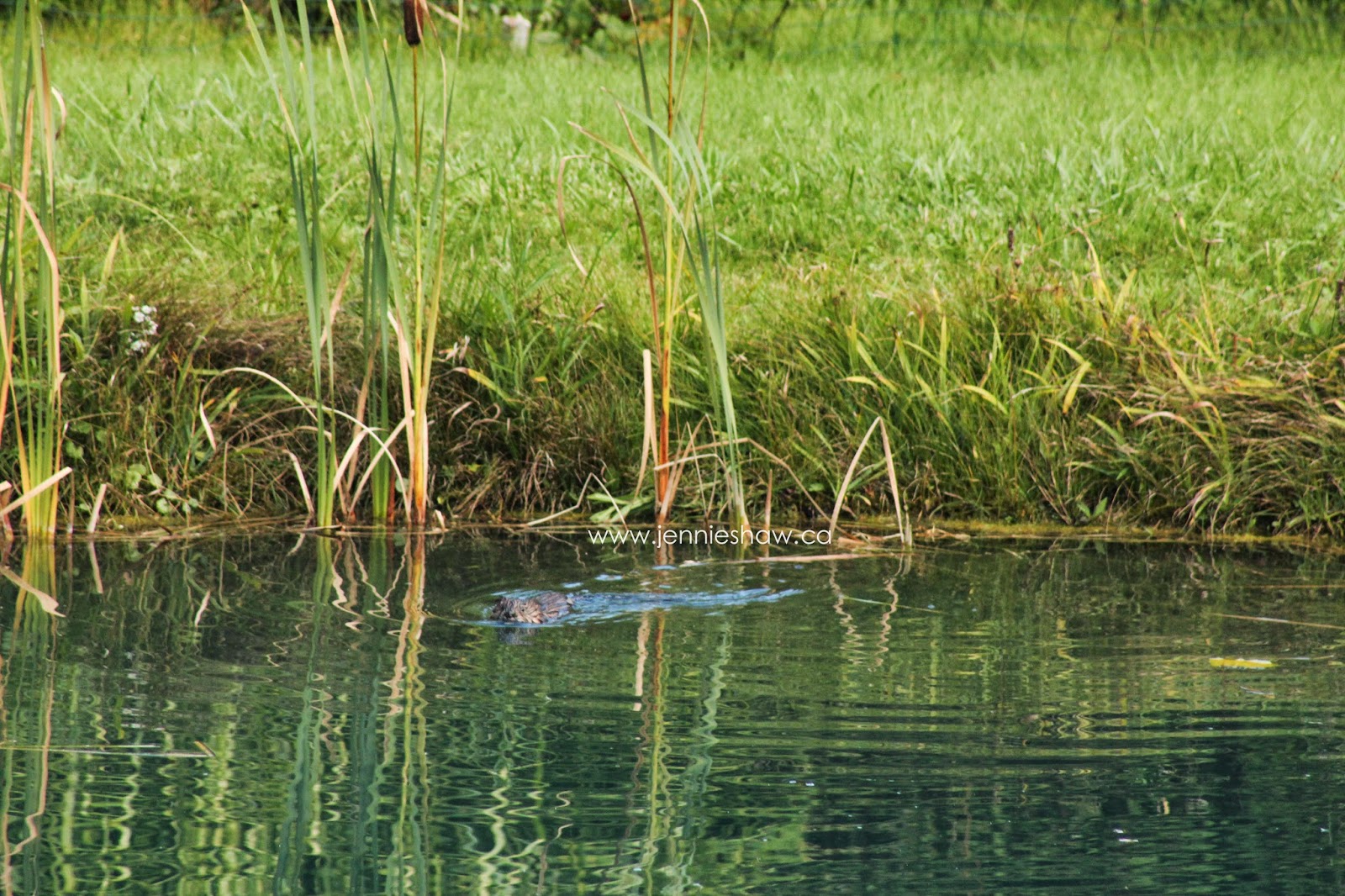 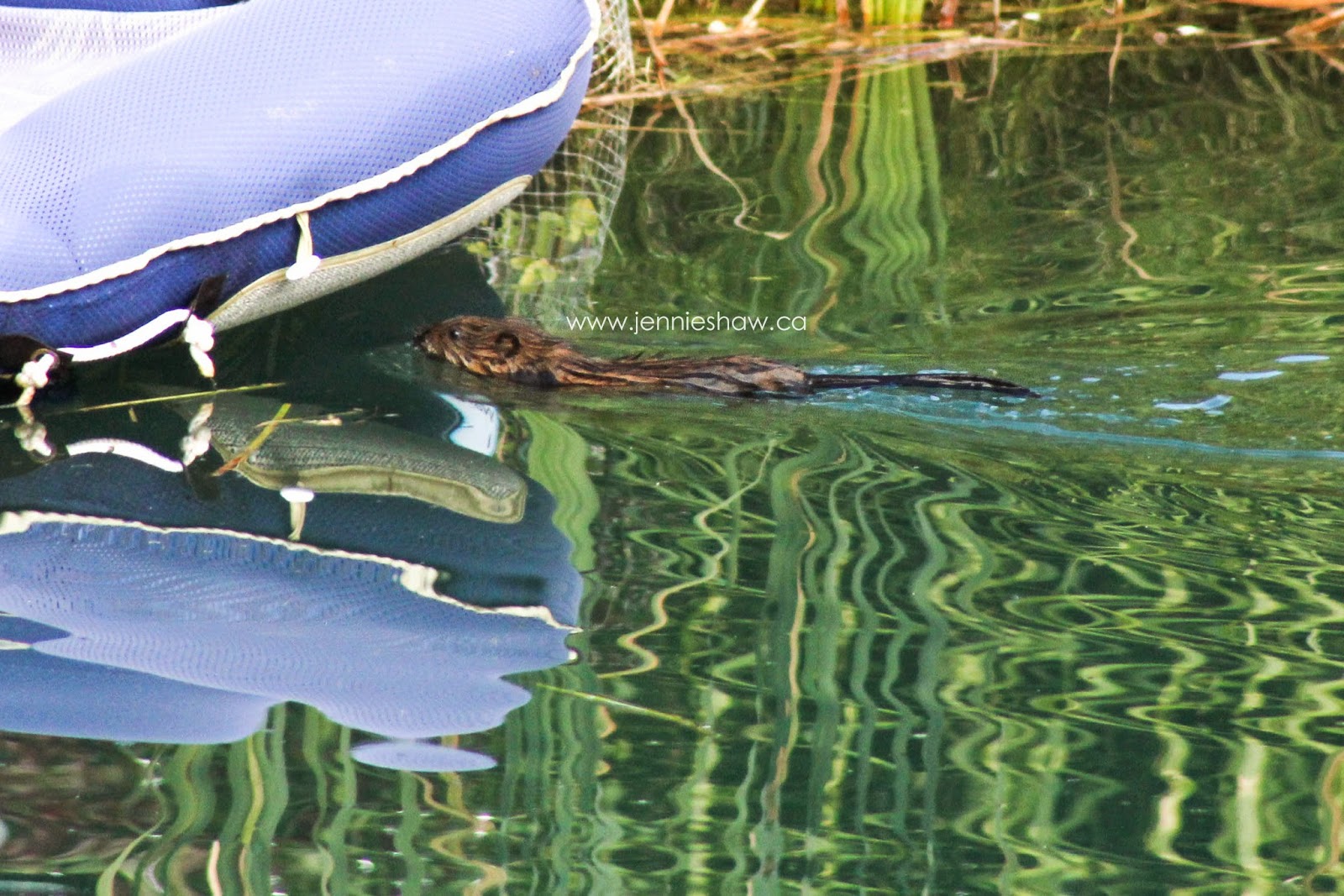 For being a potential puppy murderer, he's actually pretty cute. We've named him Voldemort. And from the pictures we found online, we're about 99% sure that V-mort is, in fact, a mink. Naturally, we were thrilled.

It was then that we took our mink-trapping attempt up another notch and bought a bigger, fancier trap that opens on both ends. More fevered Googling had revealed that mink are as sketchy as they are fish-i-cidle and they won't go near a trap if they think it's a trap, but they are super fans of tunnels. Hence, the double open-ness of the fancy trap. I also learned that you can't put in bait right away because they'll suspect something's amiss, so all the expert mink-trappers leave the trap open, with no bait, for at least a week in order to convince the mink that there's nothing scary about the trap. Then, after he's comfortable with it being there, he'll stroll right in once there's some food and--BAM--our mink problem will be solved.

So all of that takes me to right now because the trap's been out for a week and that means it's bait time. Woot! There are super gross things you can use but The Remix and I settled on the least gross--sardines--because the other options were fairly likely to attract other woodland creatures and we wanted to keep it as simple (and as gross-free) as possible.


Our plan, once we catch He Who Shall Not Be Named is to release him into the wild, because although we don't want him to kill our fish or dogs, we also don't want to kill him.

Obviously, that will require another blog post because it's sure to be a ridiculous endeavour as neither one of us are even remotely equipped to facilitate such a thing. Will the cage fit into the back of my car? Where would we even take him? And how do we make sure that he doesn't freak out and try to eat our faces once we set him free? All valid questions that we'll have to consider, should we, in fact, trap Lord Voldy. Ha!

In the meantime, The Remix shoved a bunch of shovels into the dens he's made for himself all around the pond, so hopefully he'll get the point soon. And that point is this: