Hey! So I'm reallllllllllly late for a Halloween post, but better late than never, right? Haha!

When I thought about what I wanted to be for Halloween this year, I decided it should be something that made use of my current boob situation. There's a new drug on the horizon, set to be FDA approved next year, and that means that my steroid-induced, ginormous rack could be on its way out. WOOT WOOT! Seriously. I don't know how you large-chested gals do it.

I usually make my own costumes completely from scratch, but I was quite nervous about the tentacle situation, so I found a dress that already had them and then modified it. And by "modified," I mean "added one million sequins." Haha! 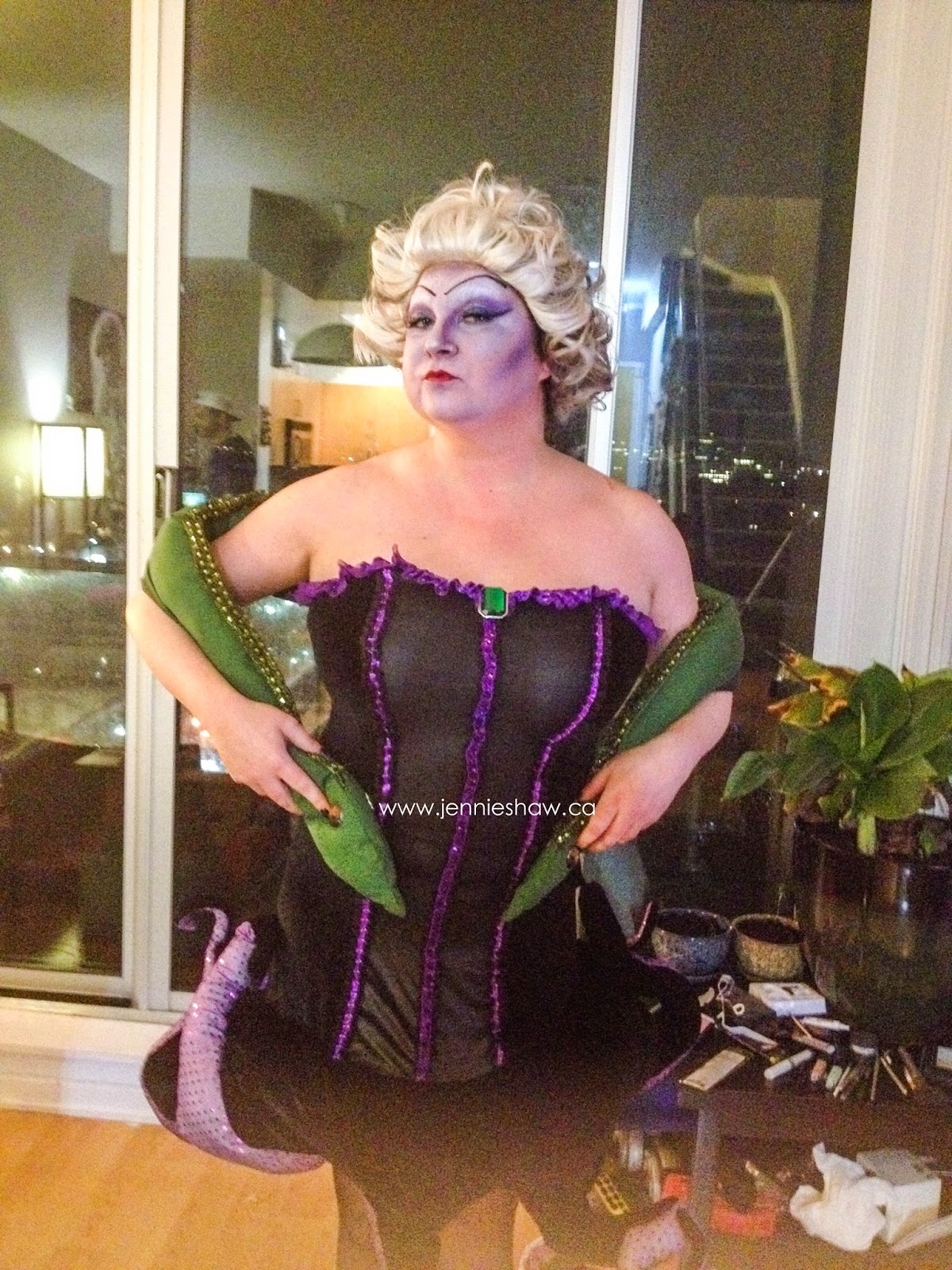 I also made a Floatsum Jetsum shrug, because Ursula's nothing without her minions. Haha! I watched a YouTube tutorial for the makeup, and thank freaking goodness or I'd never have known how to cover up my eyebrows (spoiler: it takes FOREVER). 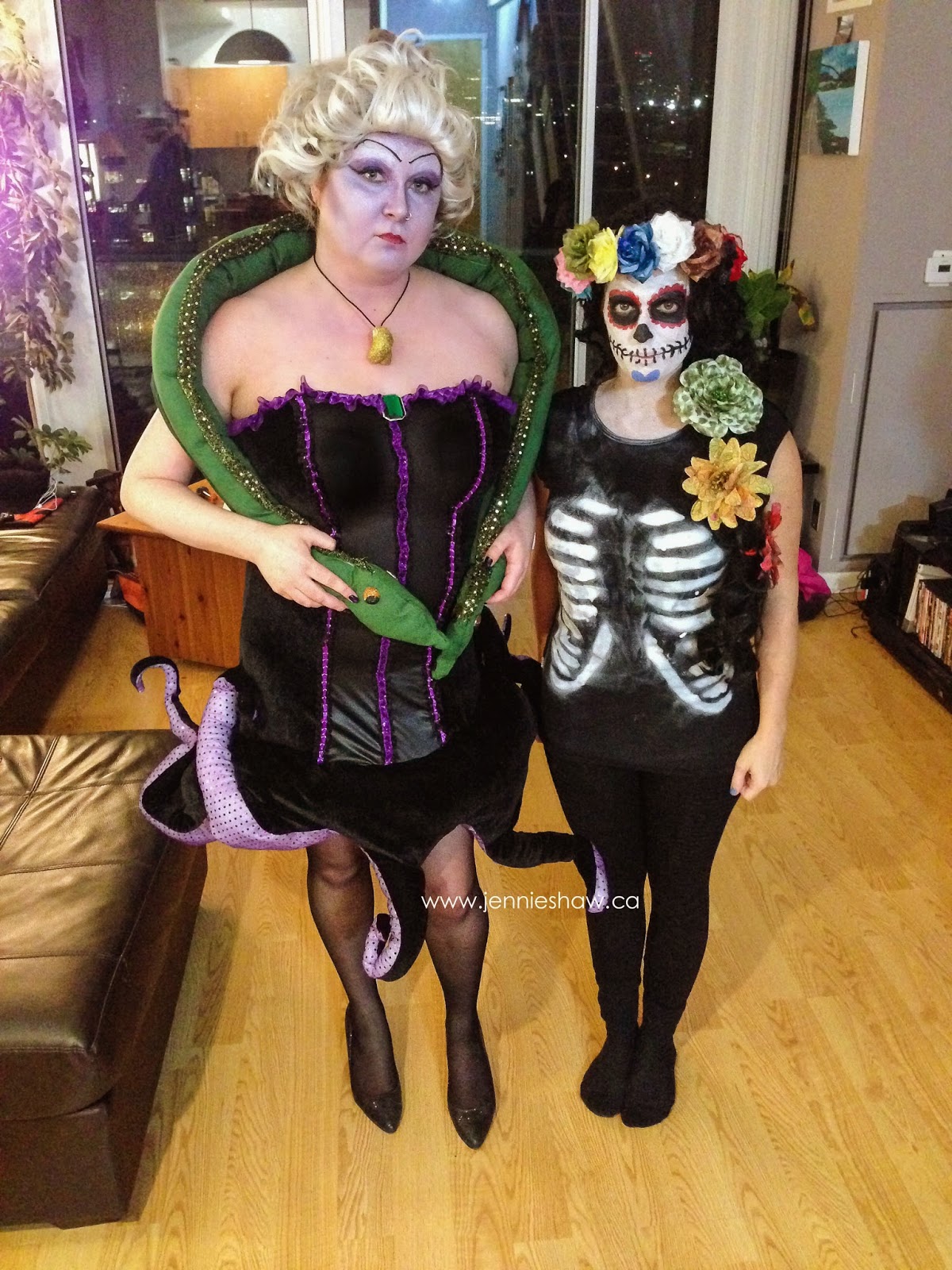 Although not purposely coordinated, my pal was kind of an unfortunate soul, dressed as a Mexican Sugar Skull.

And, of course, I did a matching mani of a purple-to-black gradient, with purple sparkles on the tips. 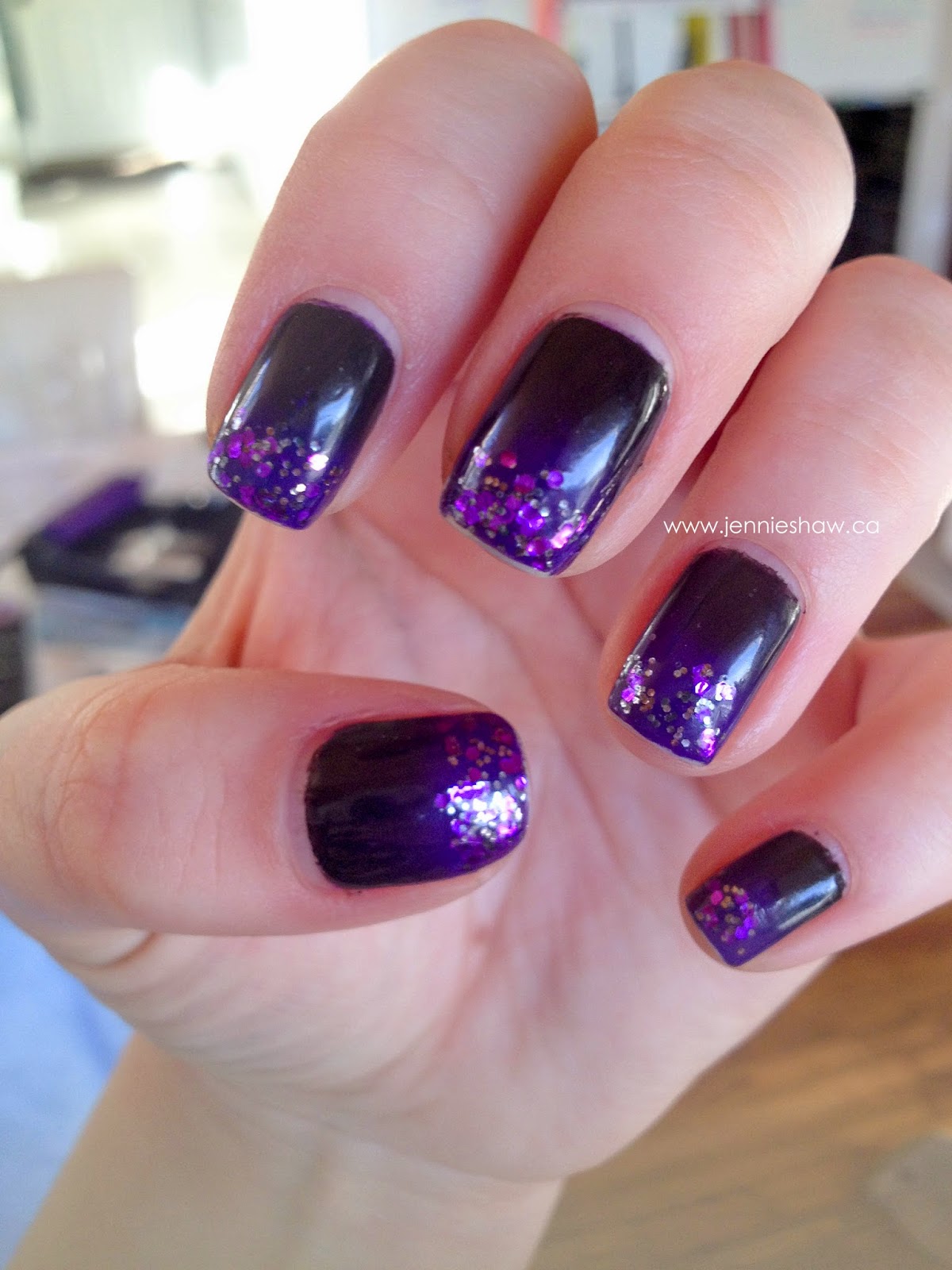 When we were all set, we headed out for our super fun night on the town, which is where my super fun Halloween story begins...

My pal and I got tickets to see a cabaret performance of The Rocky Horror Picture Show, at 10 p.m., on Friday. I know, there seriously couldn't be a better production to see on Halloween. We were SUPER psyched, to put it mildly.

We arrived at the theatre to see that most of the audience members were dressed up. Some were Rocky characters while others, like us, opted for other costumes. No matter what people were dressed up as, though, they all looked fabulous.

We weren't expecting an intermission, as it was a cabaret and not the entire show, but it was a nice break as it gave us the chance to refresh our cocktails (an act that was heavily suggested by Rocky, himself, haha). Unfortunately, there were only two bartenders to serve over 100 people (no comment), so the line moved super slowly. So slowly, in fact, that the show started before we got our drinks. A very cute usher said that we could pop in after we got our drinks, so we continued our wait.

Just as we got to the bar (YAY) the usher tapped me on the shoulder.

"You're needed inside," he said.

I looked at my pal, and then back at the usher. "Uh," I said, "you know that we're in the audience, right? Why would they need us?"

"You," the usher corrected. "You're needed inside. Your friend can get your drink."

Confused, my pal said she'd get the drinks, and I followed the usher towards the theatre door. The second I stepped inside, the actress playing Columbia took my hand and dragged me up to the stage. Apparently, there was a costume contest and I'd gotten a bye to the finals. Haha!

Rocky instructed the four finalists, myself included, to do the Time Warp, which seemed like a no-brainer until the band played a country song. Needless to say, we looked like total idiots for the next three minutes. (Well played, Rocky.) When we were finished making complete asses of ourselves, Rocky told the audience that the winner would be decided by applause.

Rocky went through the line, with a Rocky-scientist inspired gal getting a good amount of cheering, followed by a guy dressed up as a keg (who pretended to fill people's glasses while waiting in line--a man after my own heart, haha), and then another woman with impeccable Columbia costume. Considering we were at a Rocky show, she received a booming amount of applause, and I happily accepted that I wasn't going to win. Rocky got to me and, sure enough, I got a fair amount of applause, but nowhere near as much as the Columbia to my right. 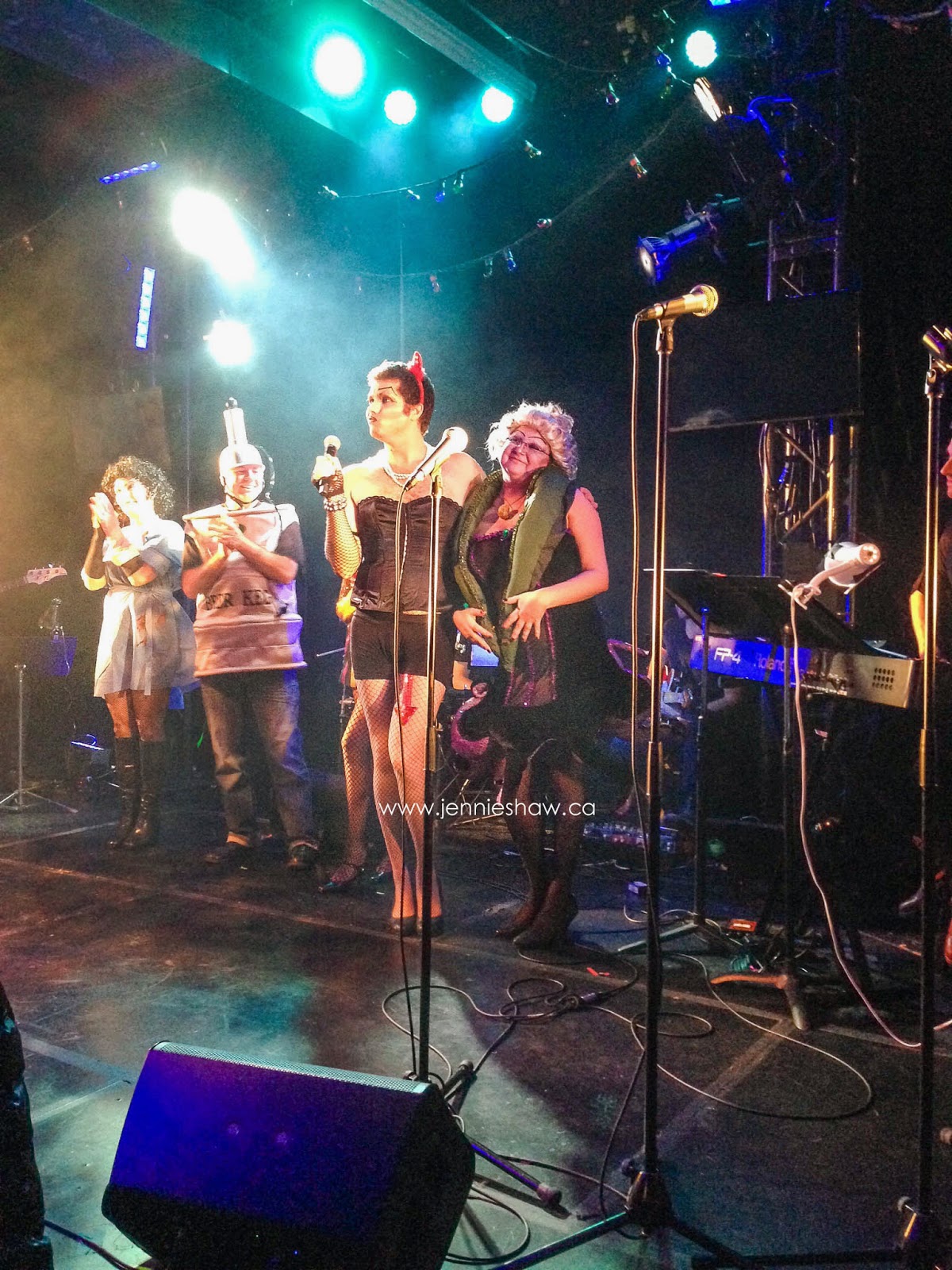 I'm not totally sure what I was doing with my face here. Haha!

He looked into the audience, and with a hand on his hip, told them they could fuck right off (I should probably clarify that this was a kind of off-broadway kind of cabaret, and some liberties were taken with the swearing. Ha!). Then, he said he was "pulling a Simon Cowell," and declared me as the winner. Haha!! It was awesome! Plus, it was my first time ever winning a costume contest!

After the show, my pal and I chatted with a few members of the cast, and then we continued on with our night. I must say, though, that the Rocky show, and my subsequent win in a costume contest we didn't know about was absolutely the highlight.