when nature attacks: how not to trap a mink

A few months ago (I’m waaaaay behind on blogging) we discovered that we had a mink living in our pond. After I wrote a post about it, I was informed that our mink may actually be a muskrat (thanks T-wrap and C-bread, my awesome Subway gals). Upon further inspection of the random sinkholes around the pond, we concluded that we did, in fact, have a muskrat. Mostly because mink don’t tunnel. That’s not to say that we didn't also have a mink, because the Remix spotted it trying to attack our bird feeder (why does bird seed attract all wildlife?) but in terms of what was living in the pond, it was a muskrat.

Armed with the knowledge that we had TWO rodent-esque squatters, we upped the ante and bought a bonus-sized container of sardines for the trap, and until we caught the mink, agreed that one of us would supervise the dogs during dusk and dawn. You know, because minks are dicks and attack smaller animals at dusk and dawn, including dogs with fairly bad survival skills (let’s not talk about the time that Pepi tried to lick a porcupine).

One morning, I was outside with the dogs, and popped inside for a second to boil water for more tea. We still hadn’t caught anything, but we hadn’t seen the muskrat or mink in a while, so I thought it would be okay. By the time I filled the kettle and walked back to the door, Pepi was waiting to come inside.

Pickle, however, was nowhere to be seen.

I called him a couple of times but there wasn’t so much as a rustle. Increasing my intensity, I called him again, walking around the deck. Still nothing. Beginning to panic, I got his favourite toy—a stuffed cheeseburger—and squeaked it, as Pickle ALWAYS comes running when he thinks you want to play. 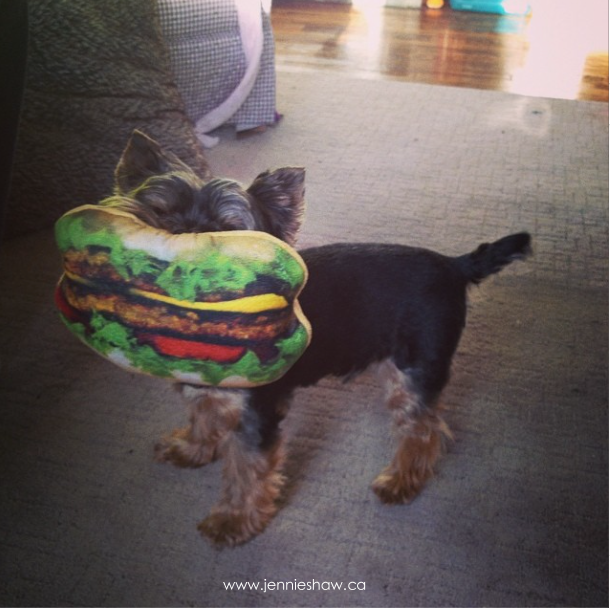 But there was still nothing.

Now, in a full-blown meltdown, I proceeded to run around the property, barefoot because I couldn’t find any shoes, using my iPhone as a flashlight because it was still really early in the morning (yes, I’m up before dawn every day).

It was then that I heard a rattling. Not much, but enough to draw my attention to the left side of the pond, underneath the windmill. I sprinted over with my heart in my throat, terrified about what I’d find.

Then, I nearly wet my pants… 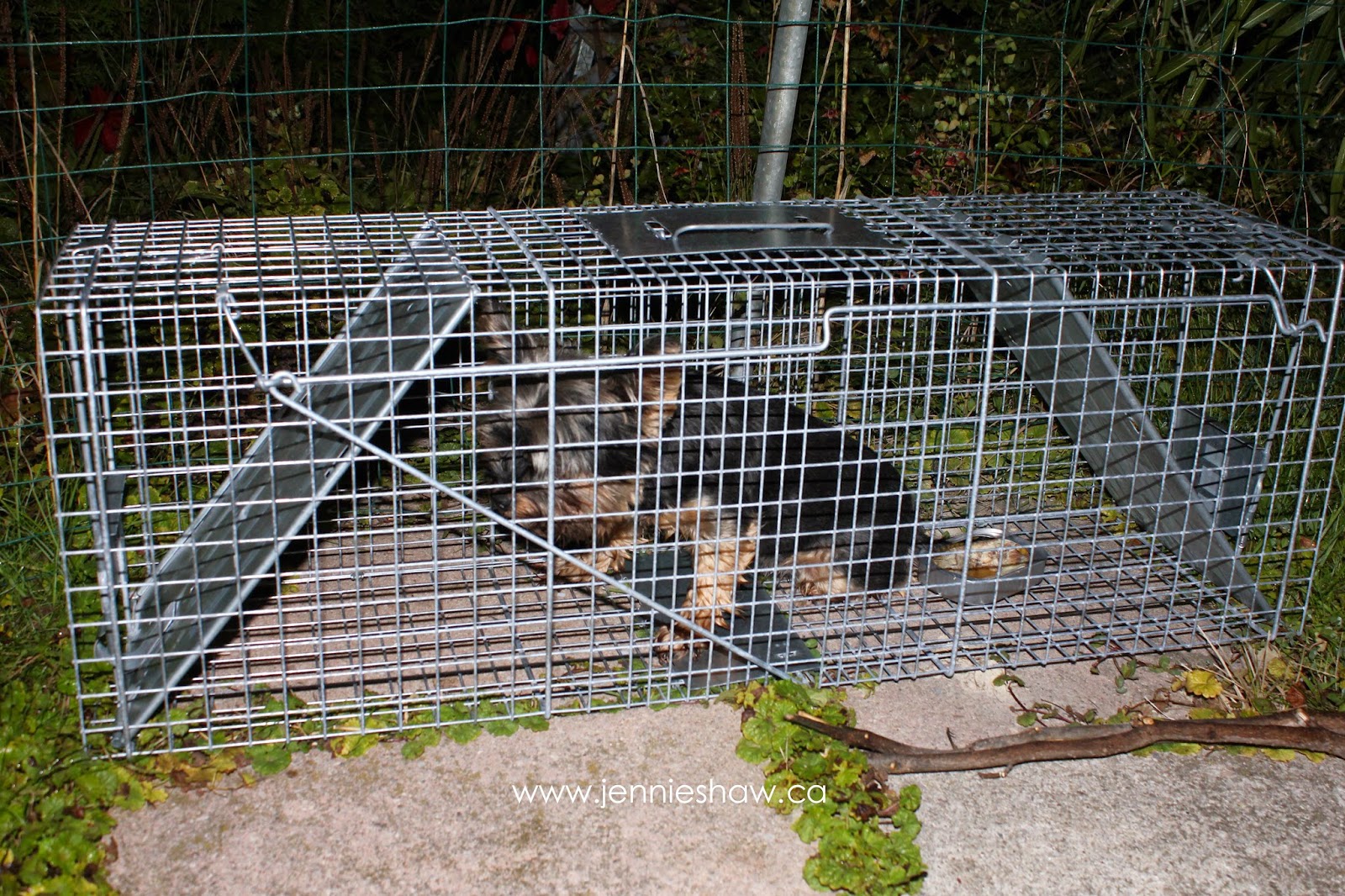 After taking a few pics (and possibly a little teasing) I let him out, but for the rest of the day, he stared at the can through the metal bars, whimpering oh-so-slightly and occasionally shaking with anticipation. Who knew sardines were so appealing? 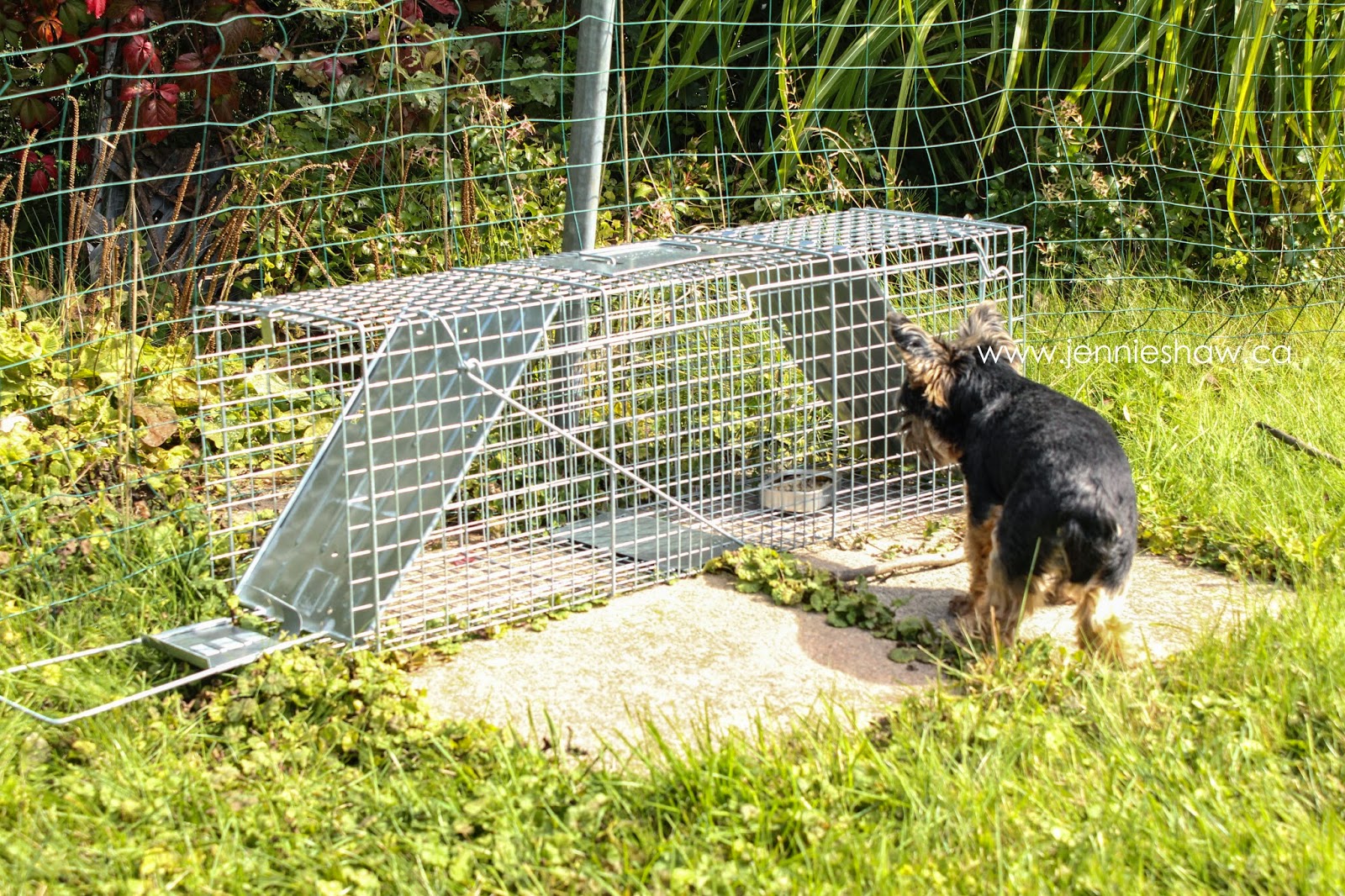 At some point in the afternoon, I glanced outside and was surprised to not see Pickle staring at the trap. I figured that he’d finally given up on his Sardine Dreams, but then I noticed him rolling around on the ground, a few feet to the right.

If you have dogs, you know that rolling on something is code for: YAY! SOMETHING DEAD I CAN SMELL LIKE.

So, naturally, I ran outside to stop him. When I got there, the smell was pungent.

Because somehow, some way, Pickle had gotten the sardine can out of the trap, eaten the ENTIRE THING, and then rolled around in the juices because he couldn’t get enough. As you can imagine, he was pretty much the grossest smelling dog of life. But even two baths later, it was still funny. I mean, he got caught in a mink trap, learned from his mistakes, and then performed a miraculous Sardine Snatch without getting trapped. For a walnut-sized brain, it’s really quite impressive. When the Remix came home, I told him all about it and we had a great old laugh.

That is, until Pickle proceeded to have explosive bum problems for the next five days. I won’t go into any further detail (you’re welcome) but let’s just say that he’s lucky he still lives with us after The Week of Grossness and Rubber Gloves.

In the meantime, we figured Pickle had ruined the first trap’s location, so we moved it to the other side of the pond. And, wouldn’t you know, a few days later, I was psyched to come outside, near dusk, to see something furry in the trap.

However, upon further inspection, I discovered that it was neither a mink nor a muskrat.

Lesson Learned: When attempting to trap a rodent-esque creature, make sure you don’t have a Yorkie.