This week was a fun one for me, albeit slightly unproductive on the writing front. But we all need a break sometimes, right? That said, within the madness, I found time to do my nails. Because, of course. Haha! 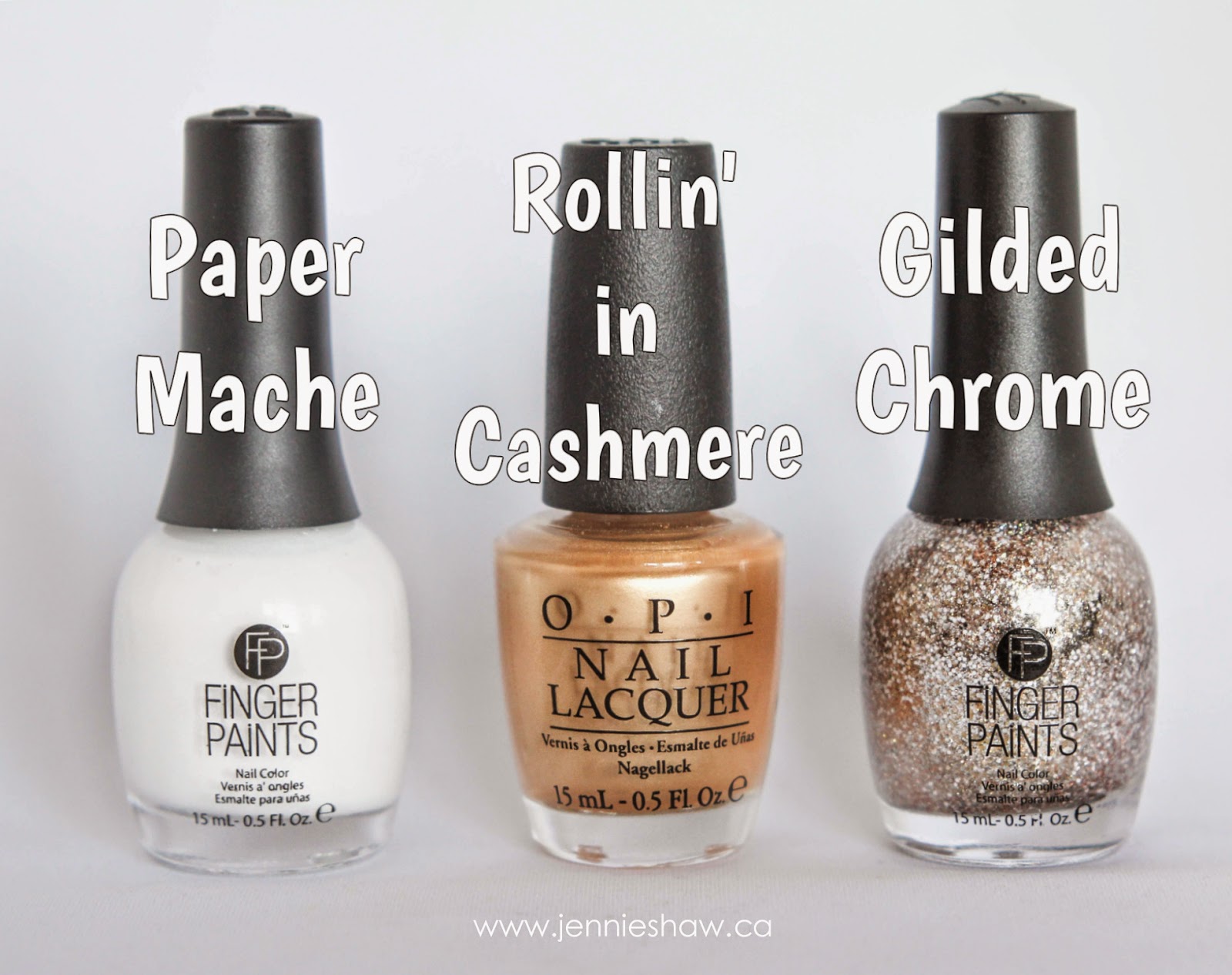 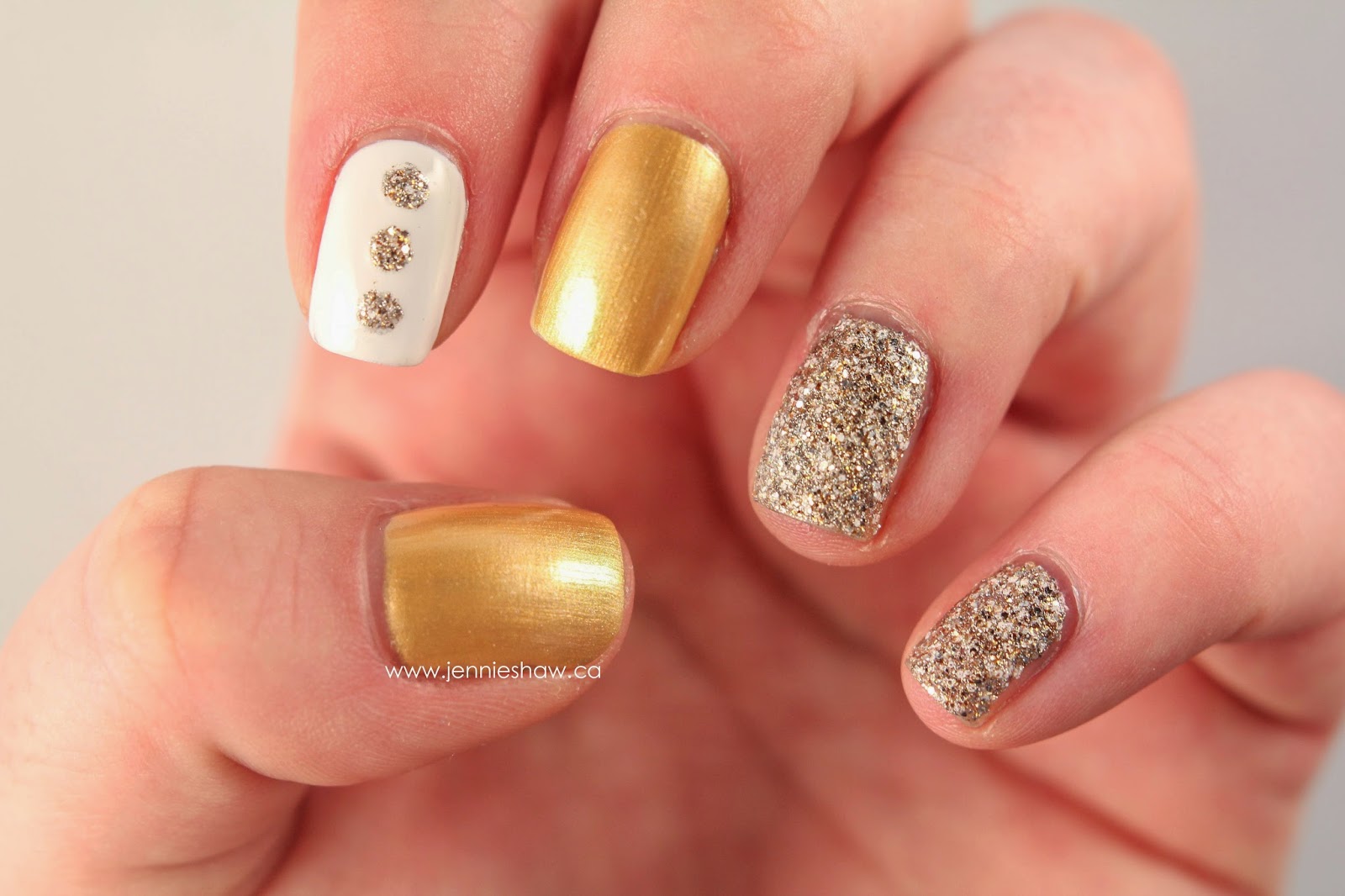 For base coats, I did two coats of Paper Mache, Rollin' in Cashmere, and Gilded Chrome. When that was dry, I got a large dotting tool and added three dots of Gilded Chrome to my pointer finger. 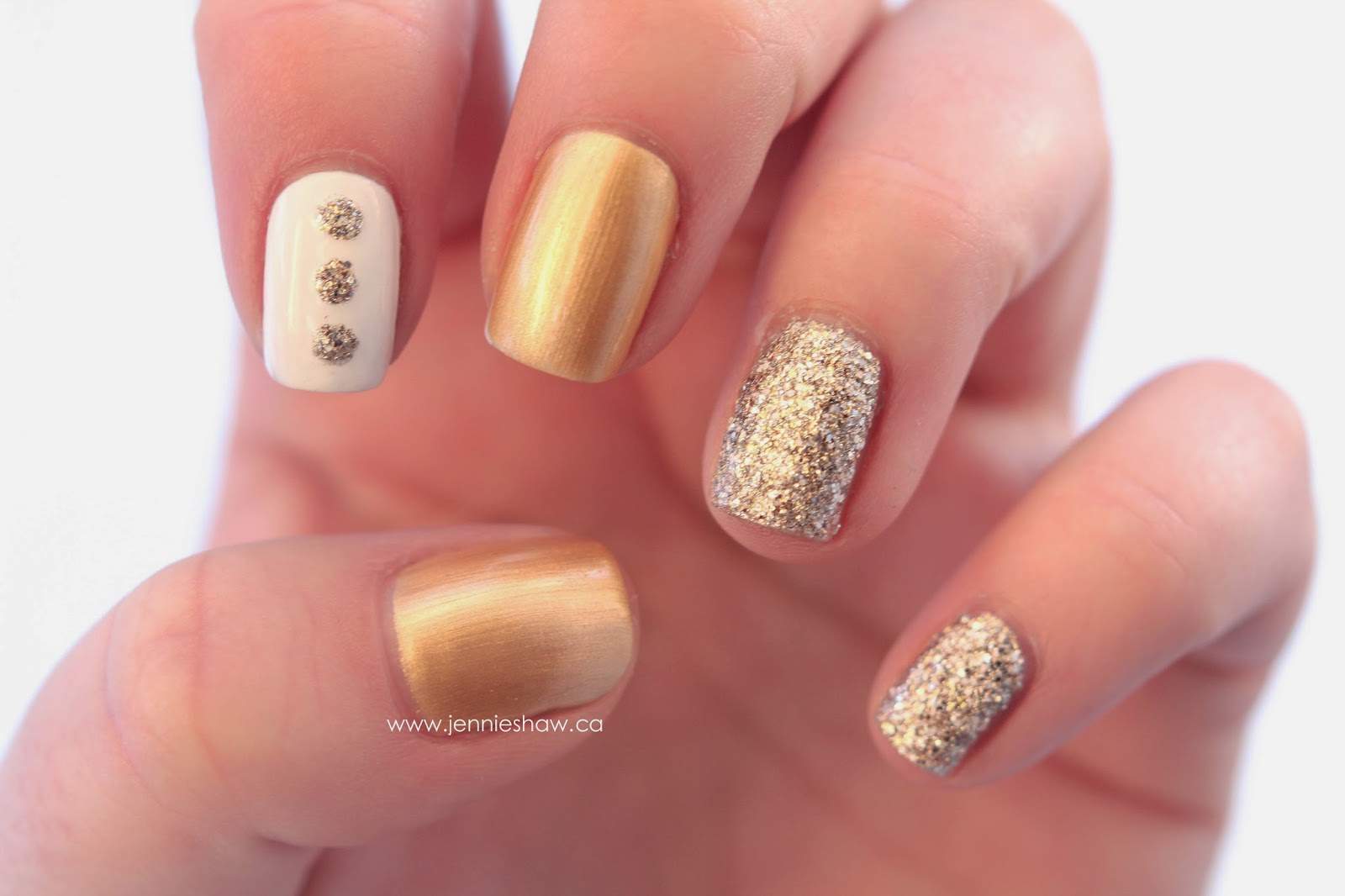 I'm sad to say that this will be my last mani with Gilded Chrome, as the sparkles have all clumped together to such a degree that it was a nightmare to apply. I added some thinner, which made it sort of better, but I think it's time to just accept the demise of this beautiful, sparkly polish. Should we have a moment of silence and bow our heads? Haha!

Hope you all have an awesome weekend, and here's hoping for a productive next week. Or, at least somewhat productive. Overachiever, I am not. Haha!


I've been seeing pops of bright, springtime colours lately and although there's still massive amounts of snow outside, I decided to join in on the fun. 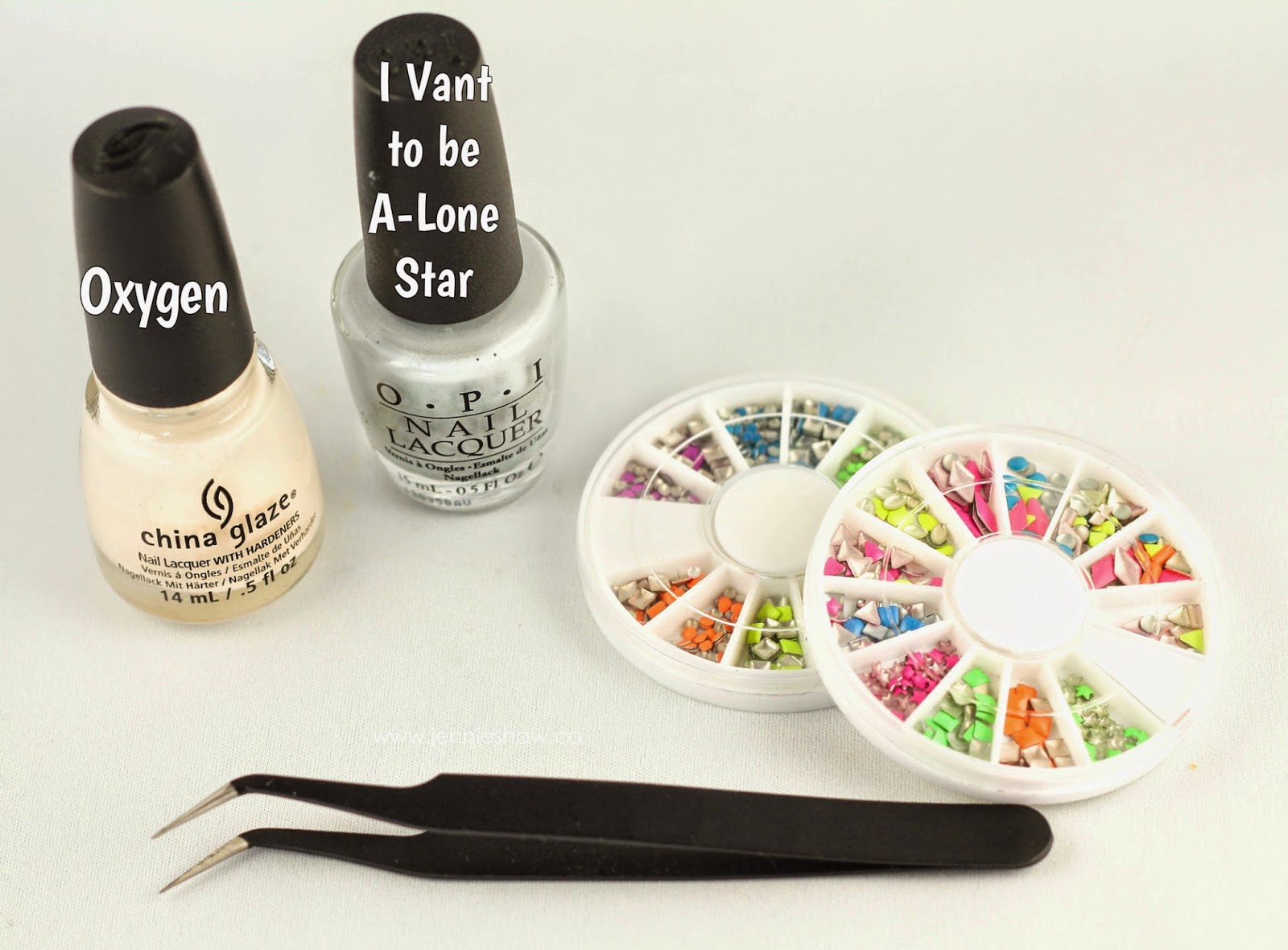 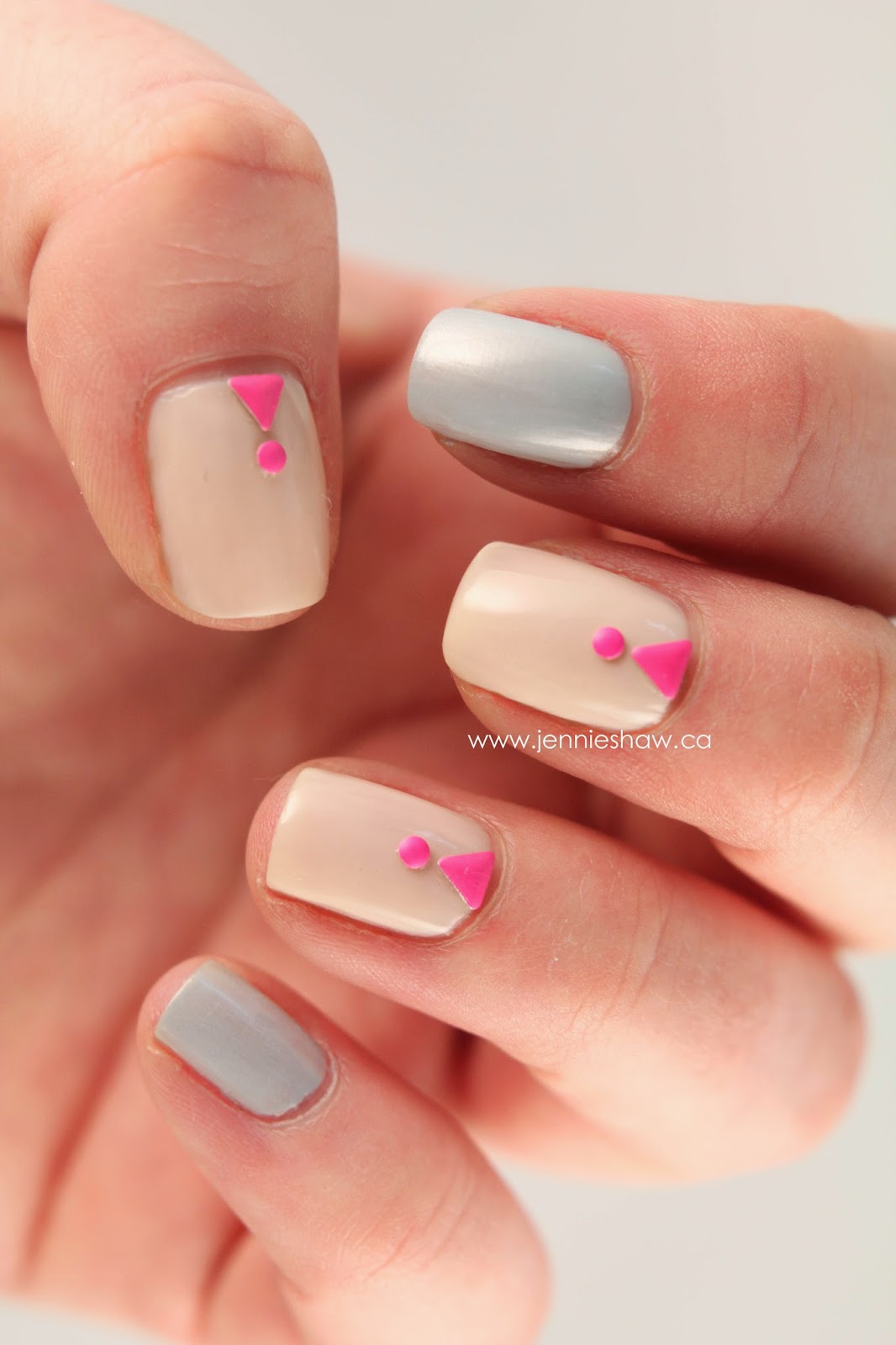 Each finger got two coats of either Oxygen or I Vant to be A-Lone Star and then, when dry, I added a hot pink triangle along the base of my nail, finishing off the look with a hot pink round stud. 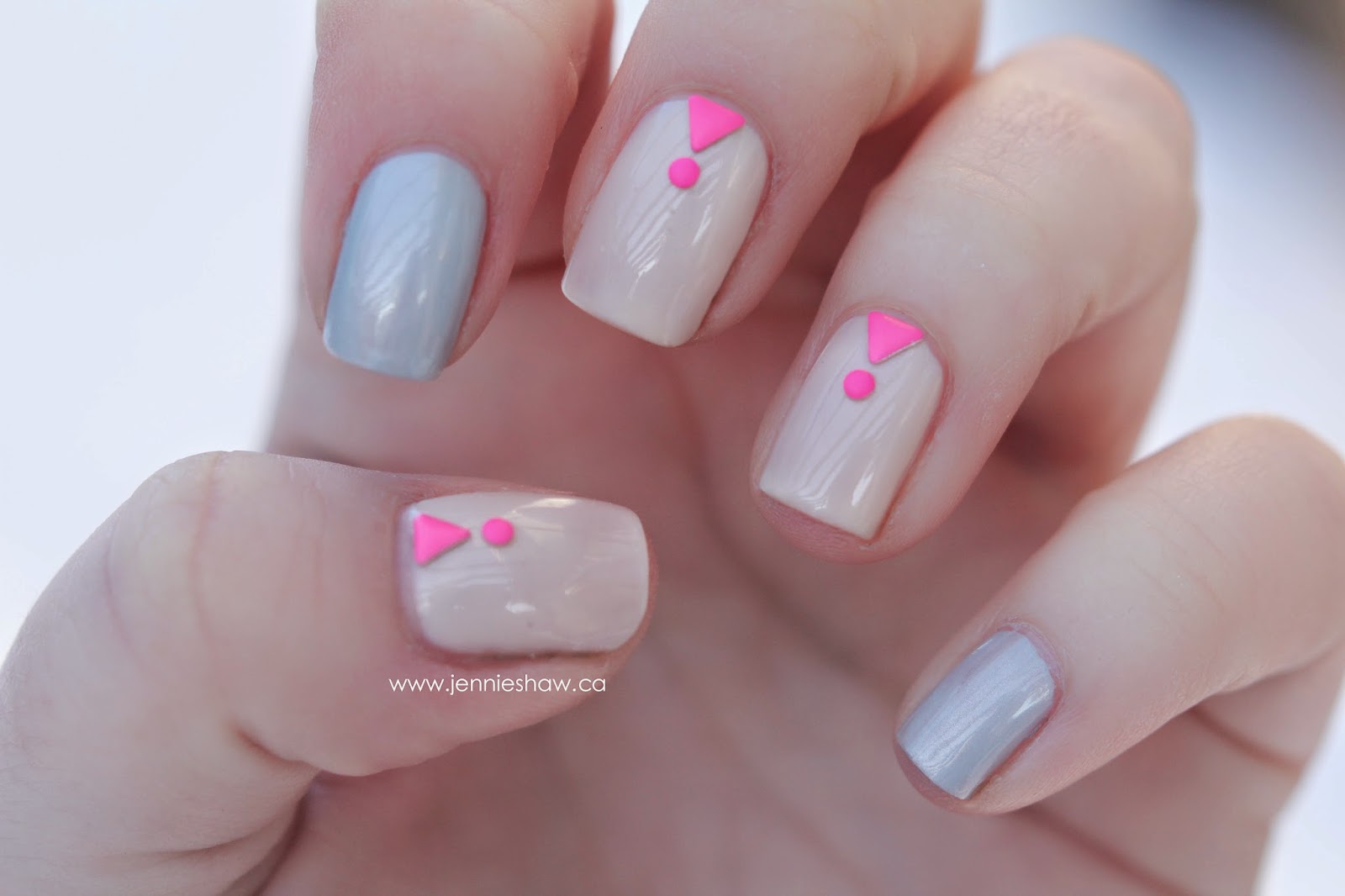 Yup, this was a super easy and simple mani, but man, does that hot pink ever make it cute! 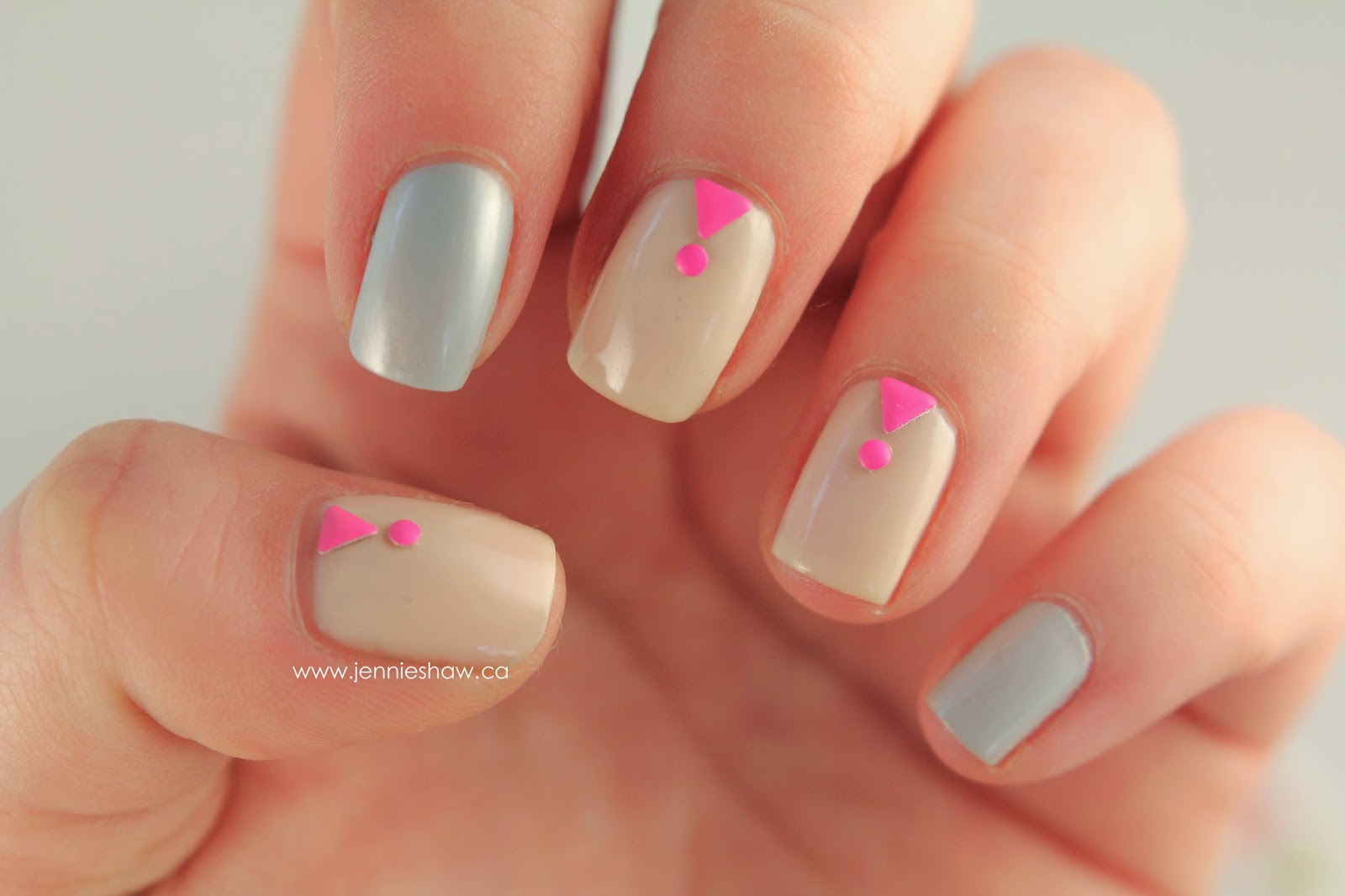 Sometimes, studs really are the easiest way to add some pizazz. If, for no other reason, the studs are automatically symmetrical. Haha!

Hope you all have an awesome weekend! And don't forget to link up and show off your pretties!

A couple of weeks ago, I saw a picture of a glitter gradient...and nearly died because it was so pretty. (If you know me at all, you know that this is an honest statement. Haha!) I'd seen comments on a few Pinterest posts, saying that it's possible to get great glitter coverage in two coats, if you use a sponge. Well, those two things came together for this mani, as I decided to try the technique for my very first glitter gradient. 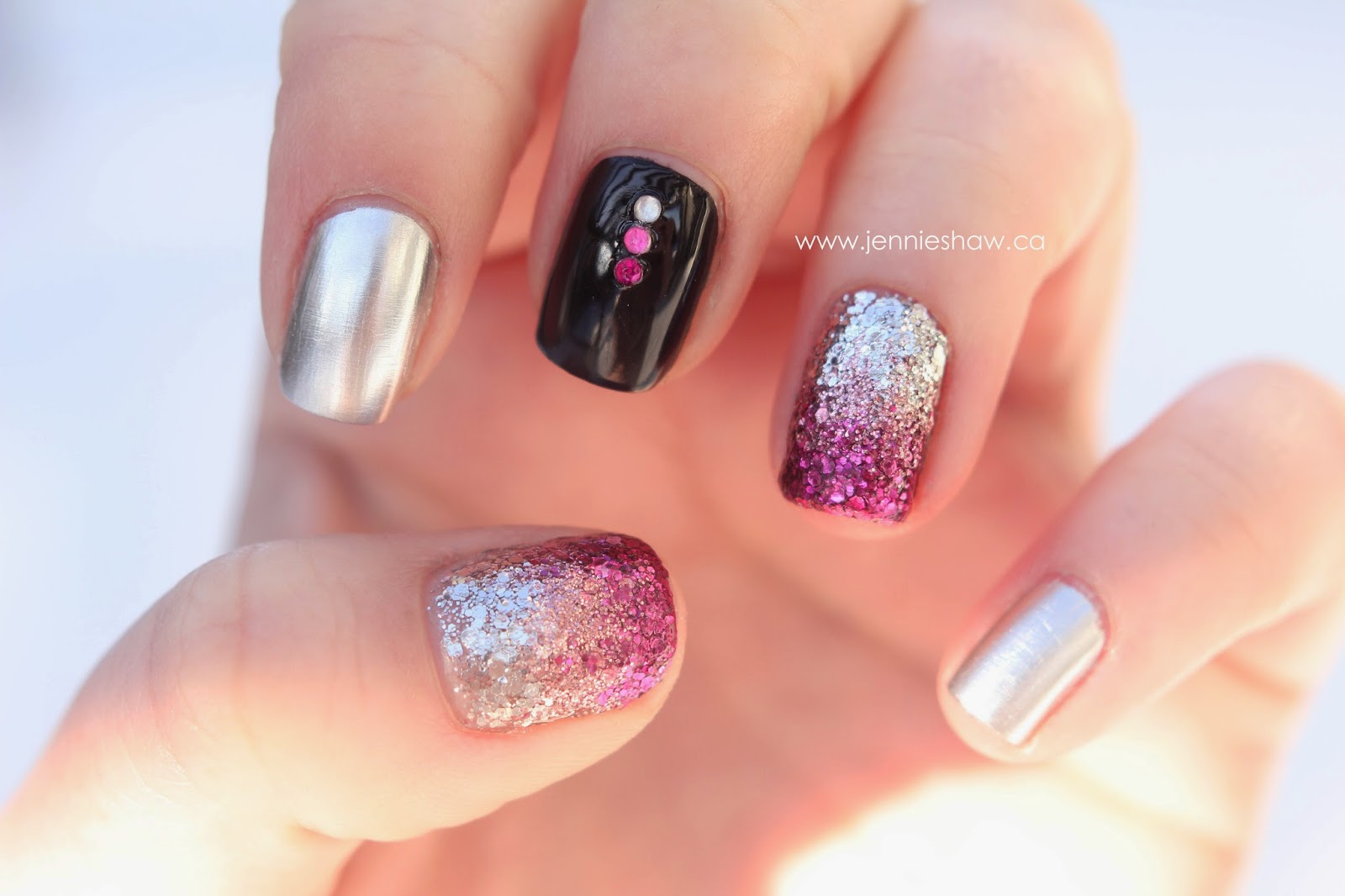 And best of all, it really wasn't that hard! Just like the comments suggested, I did two coats of glitter, applied with a sponge, and got full coverage. FULL COVERAGE, people. Whyyyyyy haven't I used a sponge to apply glitter before?!? # whinyrhetoricalquestion

To prove it to you, I took pictures as I went. Not that I thought you'd call me a liar, but it's good to cover my bases. Haha!

As you can see from the step-by-step, it literally took two coats. And it'd be even easier if you aren't allergic to latex, because then you could use that nifty stuff that's been all the rage, as of late. But, if you're allergic, like me, then plain old scotch tape works well. I'd recommend doing two swipes of each glitter on the sponge before applying. 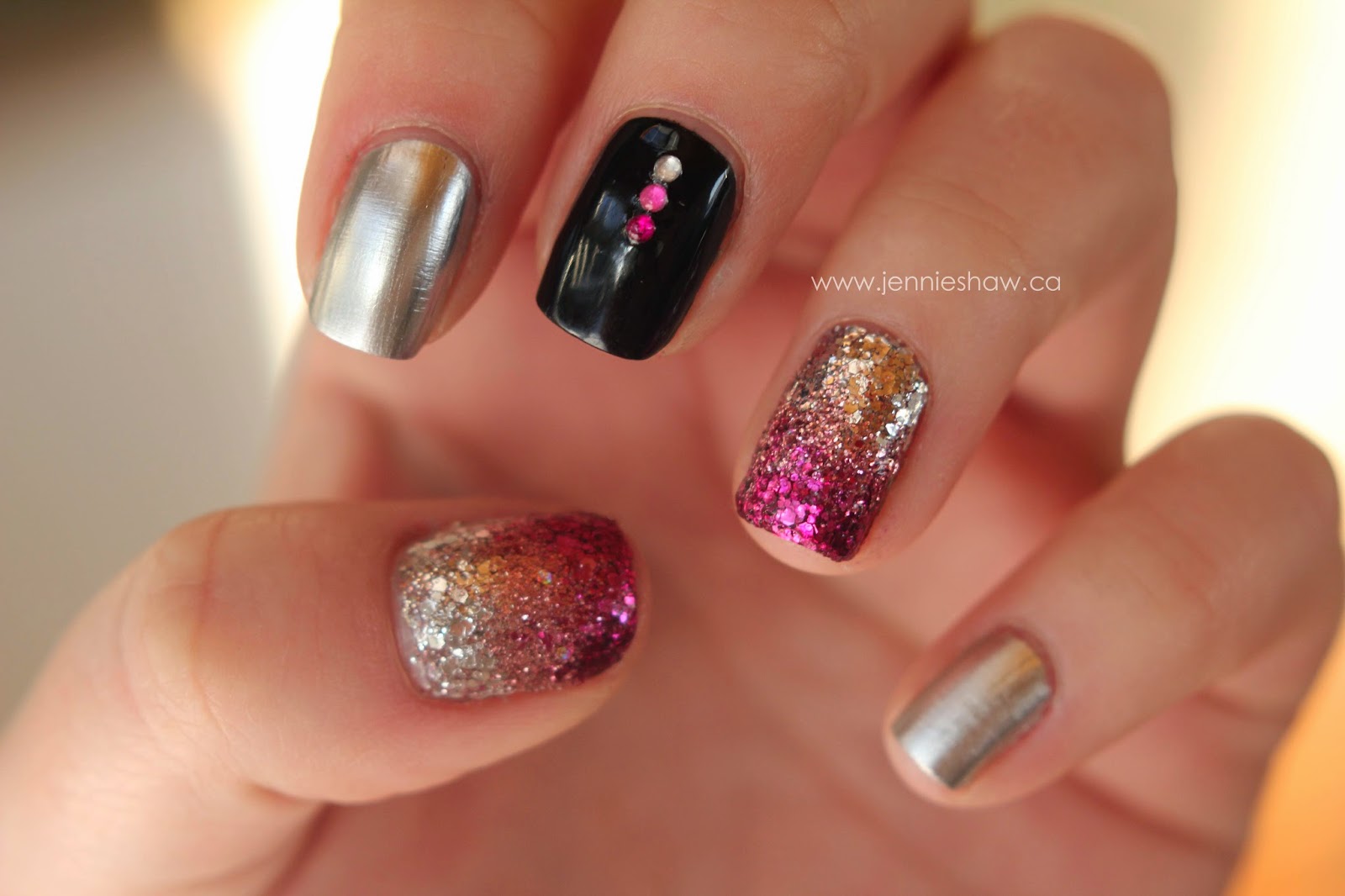 Here's a pic in non-direct light, inside. which really  shows the depth of the gradient. 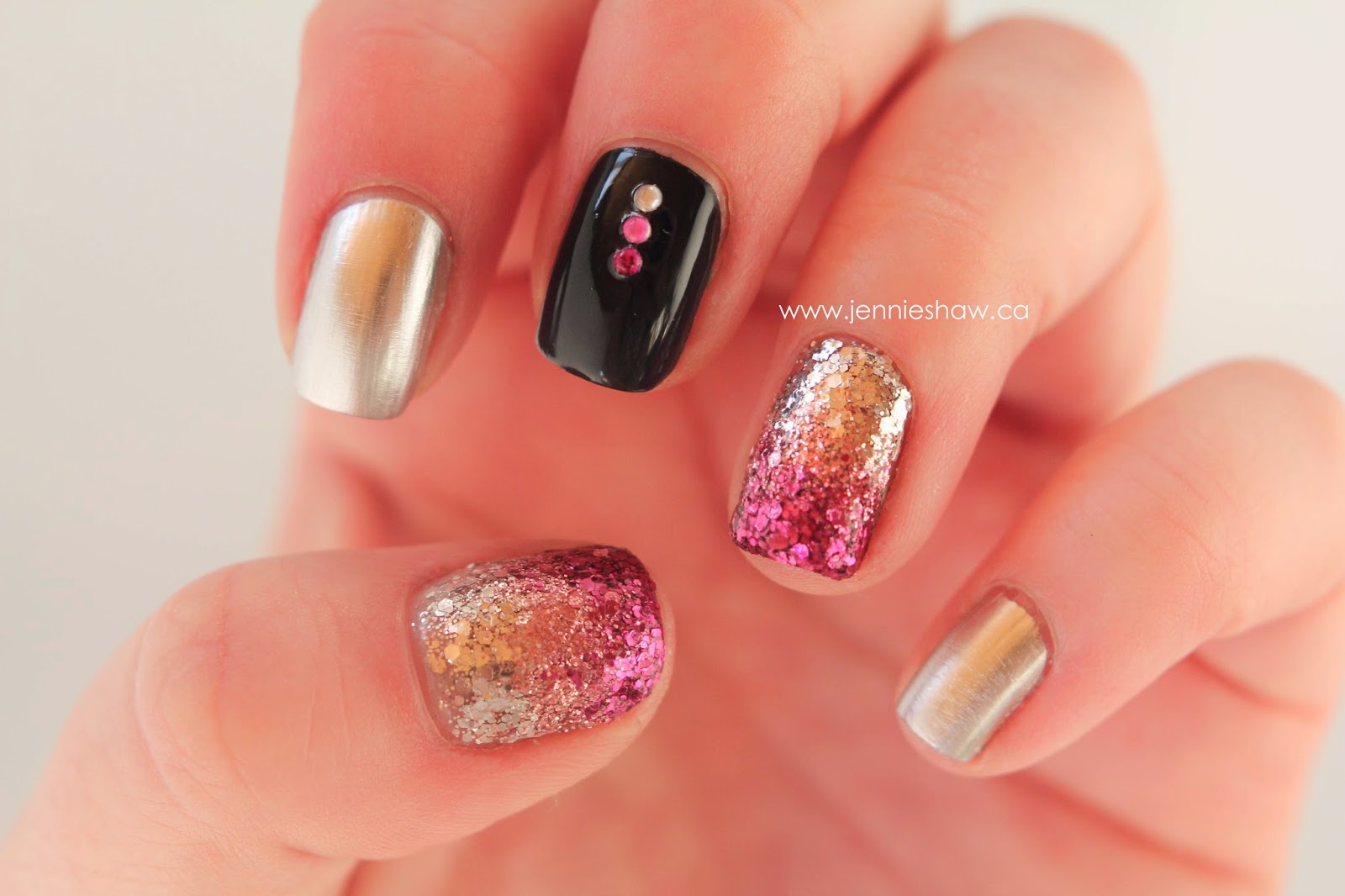 This pic was taken inside my light box, with studio lights on either side.

I honestly can't get over how pretty this mani is. No matter what the light, it really shines. And in direct sunlight, I practically have to wear sunglasses. As many pictures as I took, though, none of them really captured the shine, which is saying something because I took about a million. Haha!

The rest of the mani was easy-peasy, with two thin coats of Push and Shove (overtop the special base coat), and two coats of Black Expressionism. To round it out, I added three gemstones, in the same colours I used for the gradient (silver/white, light pink, and dark pink).

Even though there aren't any hearts on this mani, I think it's absolute a Vday mani. I mean, sparkles, pinks, and gemstones scream Valentine's-Day-y, don't they? (Say yes, please.  Haha!)

I had a lot of fun playing around with a few different Vday nail styles, but this was absolutely my favourite.

So what are your plans for Love Day? My favourite Vday memory is from when some friends and I arranged a Vday pub crawl for singles called: Looking for love in all the wrong places. Haha! Man, were those super fun. Whatever you end up doing, I hope you have an awesome time! And don't forget to link up! :)


First off, I'm sorry you're welcome for that song being stuck in your head for the rest of the day. I just couldn't help myself. Haha! Secondly, it's time for the nail files!! WOOT WOOT!

Keeping with the theme of Valentine's Day, this week, I'm sharing a fun, albeit time-consuming mani that incorporates negative space. I've seen some "stained glass" nail art on Pinterest, and figured I'd try it out. Spoiler alert, I LOVE IT. Haha! 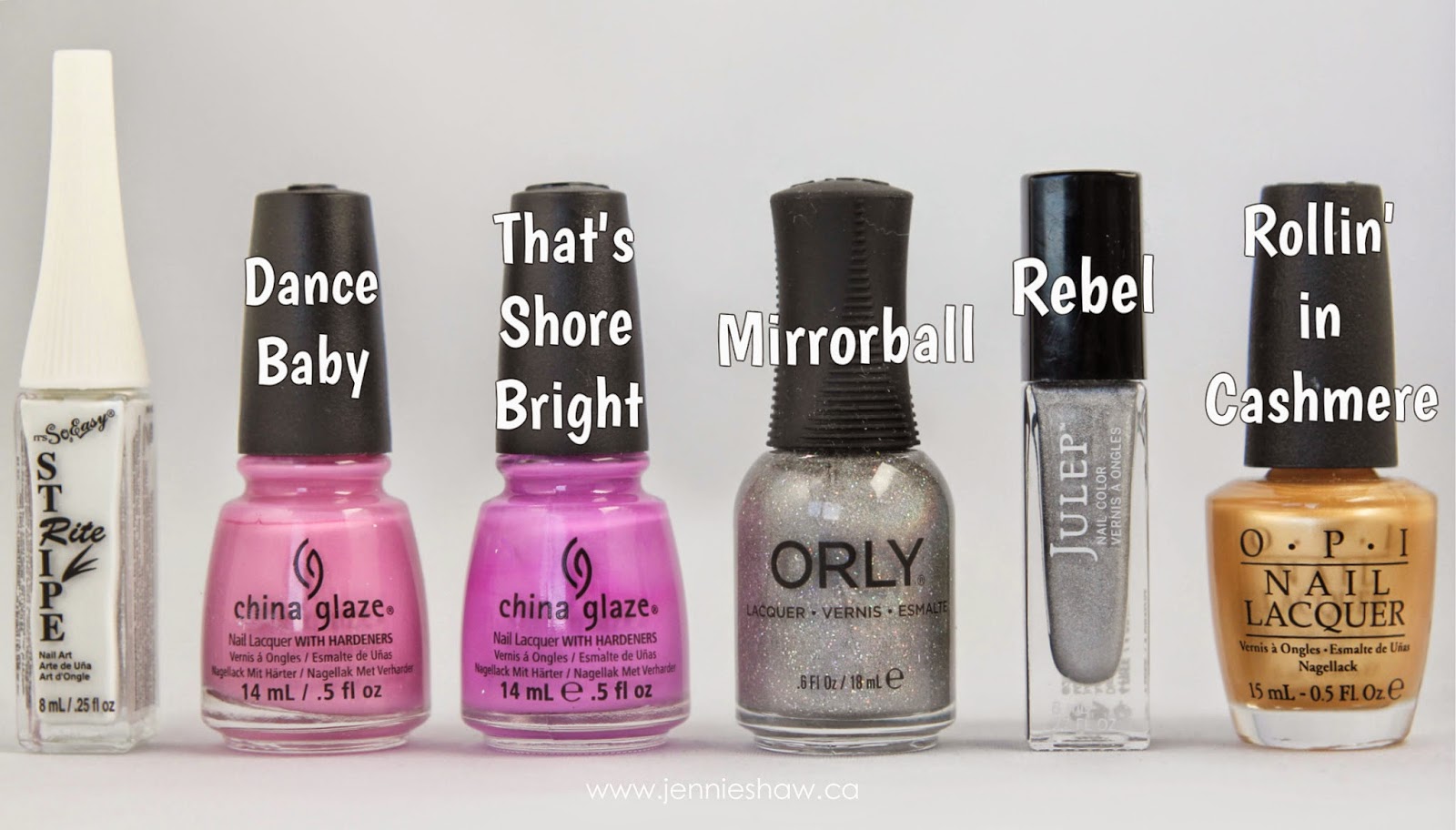 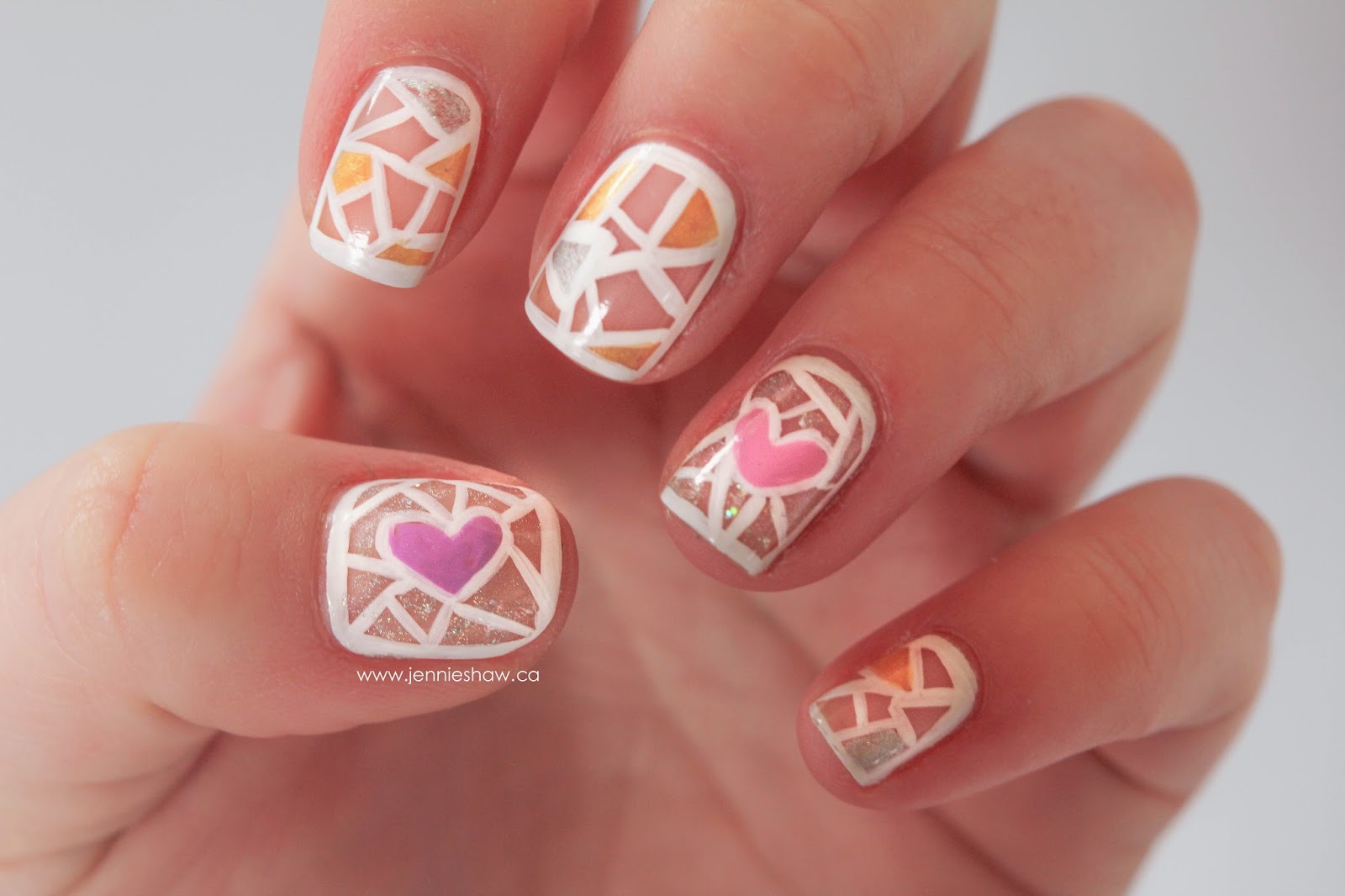 On naked nails (with a coat of OPI Matte Nail Envy), I used white Rite Stripe to make a border around each nail. Then, I added lines to make differently shaped, stained-glass-y sections, until the nail was full. With the feature nails, after the border was done, I added the heart and then filled in the rest of the nail.

The best thing about Rite Stripe is that it dries super fast, so by the time I was ready for colour, it was dry. Using a small nail art brush, I filled in each heart, one with Dance Baby and the other with That's Shore Bright. For some sparkle, because it was obviously lacking in that department, haha, I filled in all the surrounding sections with one coat of Mirrorball. Then, with the same brush (but cleaned off, obviously, haha) I filled in a few random sections on my non-feature fingers with Rebel and Rollin' in Cashmere.

When all of the sections were dry, I went over all the lines again with Rite Stripe. 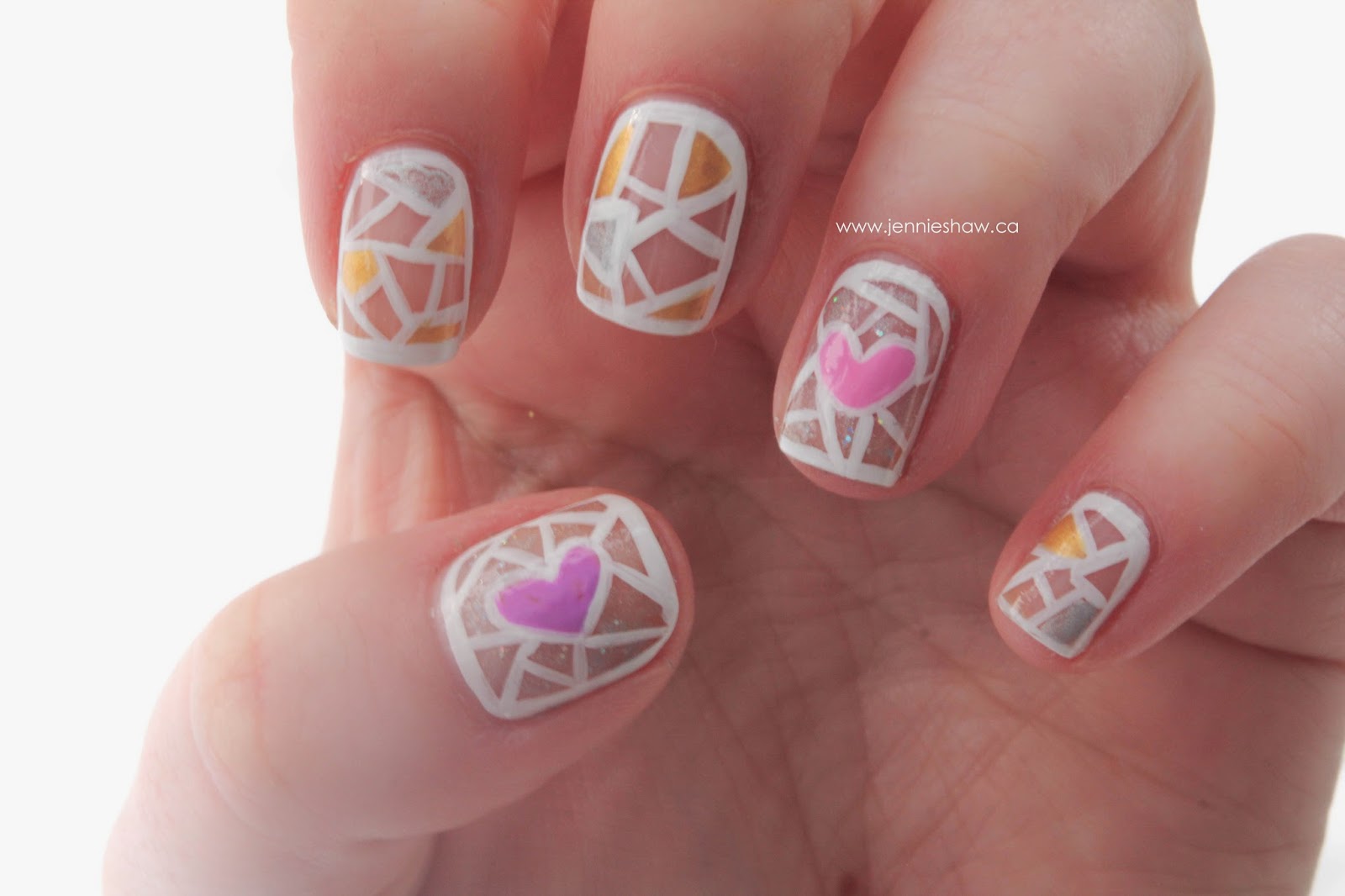 I really love manis that incorporate negative space, and this stained glass effect works so well with it. I love the pops of colour, and how it's totally appropriate for V-day without being super V-day-ish. Definitely a technique that looks way harder than it is! The beauty is that the sections don't have to be even, so you can just wing it. Yay for winging it! And now that I've shared that tip for a stained glass mani, I'm going to pack my things and go. Haha!

What did you rock this week? Are you hopping on the Valentine's Day Theme Train, or just doing your own thing? Link up and show off!